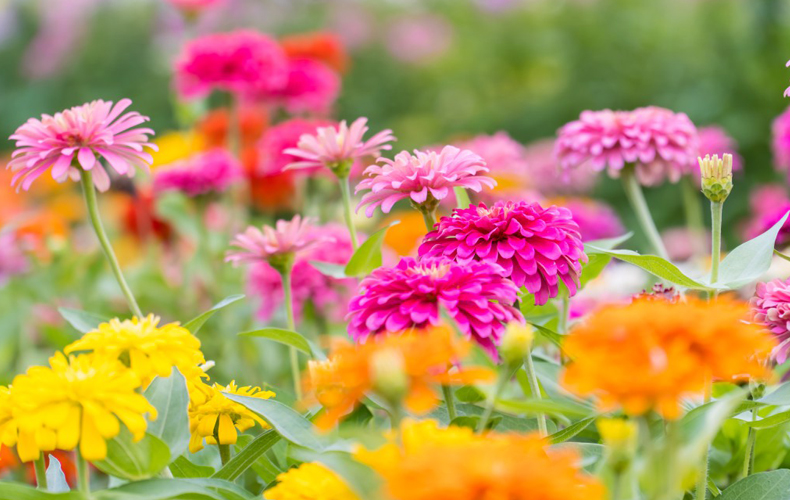 I’m an unabashed lover of zinnias. There is something about the luminosity of their colours and their unique shape – a ruff of stiff petals surrounding a central cone which is crowned with star-shaped golden florets – which I find irresistible. But when I mention zinnias so many people shake their heads and say they have no end of trouble growing them from seed. But they’re actually easy. All you need to do is observe one simple rule!

How to grow zinnias

Zinnias like this ‘Purple Prince’ are members of the daisy family. The centre of the flower is composed of hundreds of tiny, golden, star-shaped florets. These tiny flowers open from the outside towards the centre, forming a raised central cone encircled by stiff petals.
Image: Canva

Zinnias come from Mexico. They are hot season plants which loathe chilly days and nights as well as fluctuations in temperature between the two. As they are half-hardy annuals, many people sow them in February or March, thinking that they need a long growing season and that they will get ahead by sowing them early. What actually results is sad-looking seedlings which just sit and sulk. Before long their leaves curl up in disgust and go brown with botrytis (grey mould) infection.

Ipomea (Morning Glory) are similar in this regard. They resent fluctuations in day and night time temperatures and like it warm throughout the day and night. Expose them to cool nights and they soon develop sickly white patches on their leaves.

Not all zinnias are jazzy, they also come in delicate pink and peach shades such as this charming ‘Zinderella Peach’ which features a large ruffled centre.
Image: Thompson & Morgan

To grow zinnias successfully from seed, always delay sowing until the end of April or first half of May. It may seem late but the seedlings will germinate very quickly – within one to two weeks – and will grow on strongly. Seeds sown earlier will still be flailing whilst later ones rapidly catch up and overtake them.

Sow one or two seeds into separate modules filled with free-draining seed compost. They resent root disturbance and so modules are the best method. You can sow them direct outdoors but I find indoor sowing more successful as slugs love the seedlings. If you sow 2 seeds per plug and both come up then carefully remove the weaker seedling whilst holding the other good seedling in place by pressing your finger alongside it.

Once the roots of your zinnia seedlings have filled their plugs, pot them on into larger pots – I use 9cm ones. Don’t bury the stem deeper in its new pot – this reduces the chances of stem rot. The timing of potting up is crucial. Too early and the plugs won’t drop neatly out of their modules. This will disturb the roots and put a check on their growth. Too late and your seedlings will become pot bound. Pot bound seedlings fail to recover, remaining permanently stunted for the rest of the growing season.

When your seedlings are a few inches tall, pinch out the growing tips to encourage bushy plants. As soon as the root system has comfortably filled up the pot and is just beginning to poke out of the drainage holes, they are ready to plant out. Again – don’t leave it until they are pot-bound! If you sow them late April to early May, then they’ll be ready to plant out in June by which time all risk of frost will have passed. Plant them into freely-draining soil in a sunny position about 23-30cm apart. Water them well afterwards. The large-flowered varieties may require staking.

Zinnias in the veg garden

Zinnias look at home in the veg garden, providing welcome pops of colour amongst leafy vegetables and associating well with other potager annuals such as sunflowers. The single flowered varieties are also attractive to beneficial insects such as hoverflies.

Zinnias in borders and containers

Zinnias bring intense colour in late summer and autumn and are good for filling gaps in borders or extending displays after most perennials have finished. They also lend themselves to hot-themed tropical borders alongside the luxurious purple leaves of the castor oil plant (Ricinus communis), dahlias and cannas.

Compact varieties such as ‘Red Spider’ are also available. These have smaller, more delicate flowers which are good candidates for edging borders and associate well with ornamental grasses. Zinnias also perform well in container displays alongside other summer bedding.

Combine zinnias with other hardy and half hardy annuals to make gorgeous vase displays. Here they are displayed with Antirrhinums (Snapdragon), marigolds, Celosia cristata, Rudbeckia and Ageratum
Image: Shutterstock

Zinnias like it hot and dry and will succumb to grey mould if it is wet and humid. There isn’t much to be done about this except keep your fingers crossed and hope for a good summer!

Take a look at our selection of zinnia seeds and get sowing now. They will hold their dazzling flowers through summer and autumn, providing zingy colour when everything else looks drab. Keep dead-heading them and you will get armfuls of colourful blooms for indoor displays too.