Where do you start with a neglected garden? 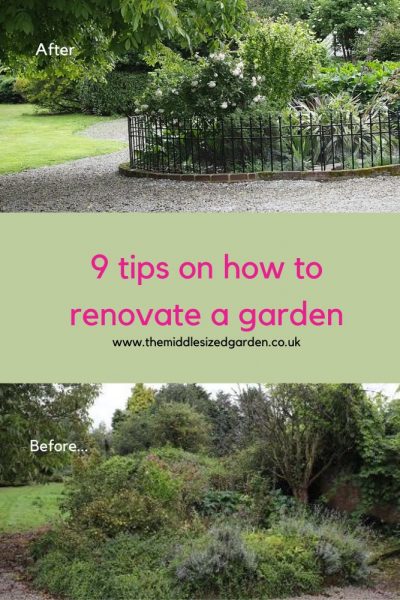 Where do you start with a neglected garden?

When Natalie and Mike Newman first saw their house, they were attracted by the neglected garden almost more than the house itself.

It was probably laid out in Victorian or Edwardian times. At one side, massive overgrown conifers crowded into each other around a side lawn.

Then there was a walled garden directly behind the house. Once the farm’s vegetable garden, it had a crumbling brick bothy and an old greenhouse. But it was hard to get past the thicket of self-seeded elders and brambles covering half the area. 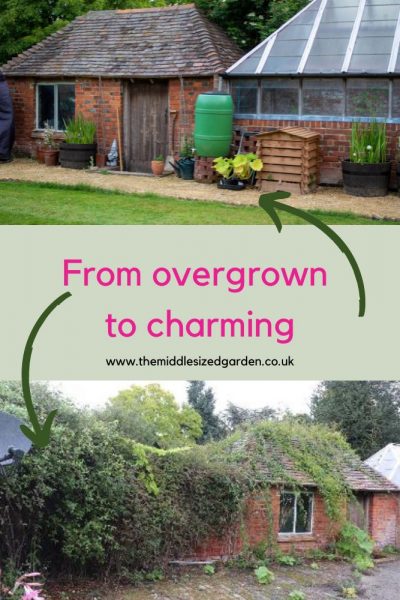 Natalie and Mike fell in love with this old potting shed almost hidden under climbers. It’s probably Victorian or may be even older. The little greenhouse is dug into the ground by a few feet, which helps keep it warm in winter.

The front lawn had more thistles than lawn. And the vegetable garden was so overgrown that when they cleared it, they discovered a bomb shelter from the Second World War. ‘That was a surprise,’ says Natalie. ‘We had no idea it was there.’

Now they’ve succeeded in retaining the best historic elements of the garden while making it a vibrant garden for family life now. Natalie records it on her Instagram feed @homestall_house.

And it’s one of 30 gardens open for Faversham Open Gardens & Garden Market Day, held in Faversham, Kent on 26th June.  You get entry to all 30 of the gardens for £6 (£10 for 2), available in advance online or from Faversham’s historic Market Place on 26th.

Set your priorities, then work zone by zone

The first thing to do when tackling a neglected garden is to set your priorities. For Natalie and Mike, the first task was to make the garden safe for their two children.

So they engaged contractors to clear large areas of thistles.

After that, they treated the garden as a series of zones, deciding what they wanted from each area, what they’d like to keep and what needed to be taken out.

‘We had lots of advice from friends,’ says Mike. ‘And we did lots of research. But I’ll admit there was also an element of luck in how it turned out.’

Natalie and Mike also aimed to keep as much of the original spirit of the garden as they could while updating it.

As Stephen Ryan says in this post on how to renovate a larger garden, it’s important to consider the history and architecture of a house and garden when planning what to keep and what to change.

Work out where the sun falls

When you’re planning or renovating a garden, it’s important to know where the shady and sun areas are.

And also be aware that they might change. When you tackle a neglected garden, you often take out or reduce the height of trees so the sunny spots may change.

Natalie and Mike planted a wildflower meadow down one side of the walled garden, but one end of it proved to be too shady for the wildflowers they’d chosen. ‘So we decided to have a curving swathe of wildflowers at one end instead of a strip all down the garden,’ says Natalie. It actually looks beautifully natural like that.

Decide what to do with mature trees

You can shape mature trees, reduce them in height or remove lower branches. Natalie and Mike have retained a large number of trees by doing all three.

Some of the trees were clearly up to a 100 years old. ‘We decided to get rid of anything that looked diseased or weak,’ says Natalie. ‘But we wanted to keep as many of the mature trees as possible.’

Mature trees add a huge amount of presence to a garden. Once chopped down, they can’t be replaced unless you spend thousands of pounds.

They kept the trees around the perimeter of the walled garden, but reduced them in height and removed the lower branches. This lets in more light.

Most importantly, they used qualified tree surgeons. Tree work can be very dangerous for amateurs. And a good tree surgeon will prune a tree so that it looks more beautiful and is also healthier.

(If you want to find out how to find a good one, see this post on how to tell the difference between a tree surgeon, an arborist and a chain saw man.’)

You don’t have to cut trees down

To the side of the house – outside the walled garden – is an area that may have been planted as a Victorian pinetum. It has a variety of different trees, which were one tangled mass when Mike and Natalie moved in. 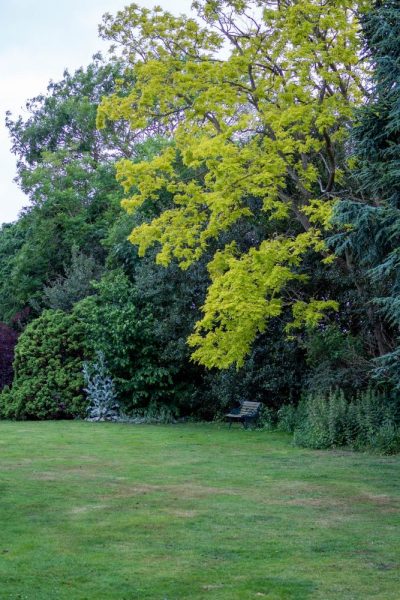 A section of what could have been an old Victorian pinetum. The trees have contrasting foliage shapes and colours. Many are conifers. The Newmans wanted to keep them and shaped them to restore the individual character of each tree.

‘We wanted to keep them all,’ says Natalie. ‘They work well together. There are spiky ones and round ones, dark greens and light greens. So we had them pruned so that you can now see the individual trees again.’

Conifers have fallen out of fashion but they work well to create evergreen contrast and colour in a garden. If you’d like to create a mini Victorian pinetum of your own, see how conifers can transform your year-round garden.

And on the patio, near the house, there was a beautiful copper beech that was taller than the house. They have reduced it in height and had it pruned into an umbrella shape. 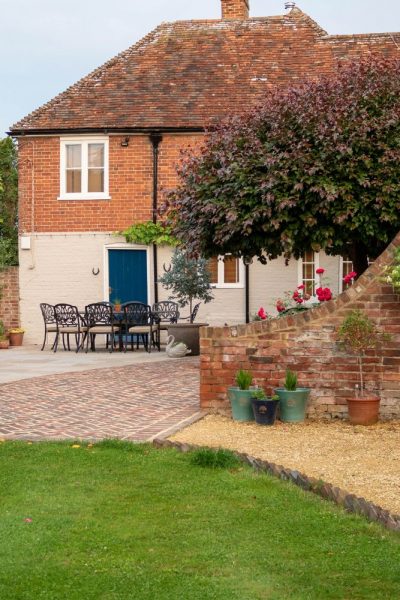 This tree was reduced from a sprawling tower to an umbrella shape. It looks beautiful and offers shade on the terrace.

Restore or remove out of control shrubs and climbers

You don’t have to clear away all the plants in a neglected garden. Many roses, for example, can live for decades and are worth reviving.

People are often told to get rid of climbers, especially if they’re growing up walls. But a mature climber often has a beautiful gnarled trunk and can be pruned into shape. 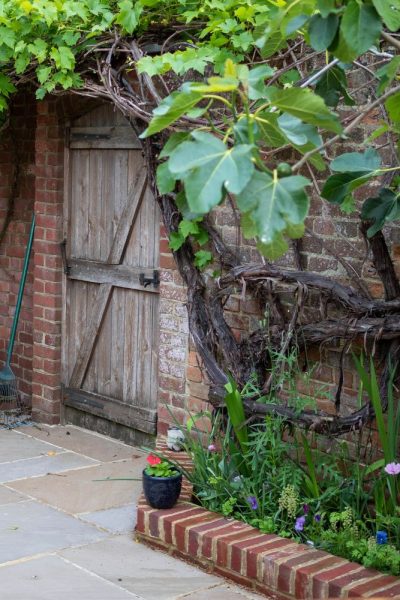 This old vine has a beautifully gnarled trunk., which adds character. It’s been pruned and renovated rather than thrown out.

And the RHS say that climbers rarely damage buildings. If someone tells you, you need to get rid of a climber, then get a second opinion before automatically assuming they’re right. 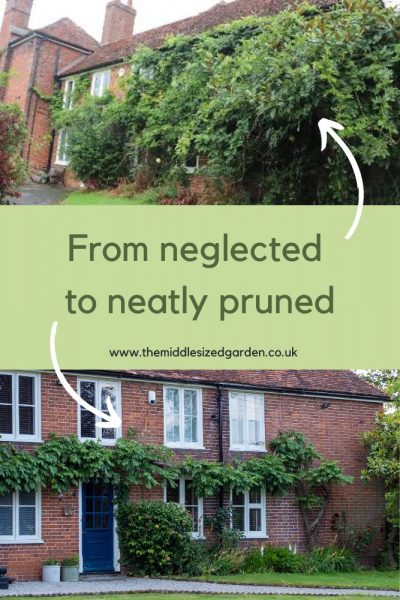 People are often told to get rid of old wisteria covering their houses. But if you keep wisteria properly pruned, then it looks beautiful and is unlikely to do any damage.

‘We used plant identification apps,’ says Mike. ‘You can usually point them at a plant and you have a reasonable chance of finding out what it is. And then you can find out what to do with it.’

There are several lawns around the house. They were all thick with weeds, brambles or self-seeded trees when Natalie and Mike moved in. However, they haven’t re-turfed any of it.

After they cleared the walled garden, they used grass seed rather than turf. ‘It’s cheaper,’ says Natalie. ‘And also at that time of year, newly laid turf would have needed constant watering’.

On one side they planted the strip of wildflower meadow, also from seed. 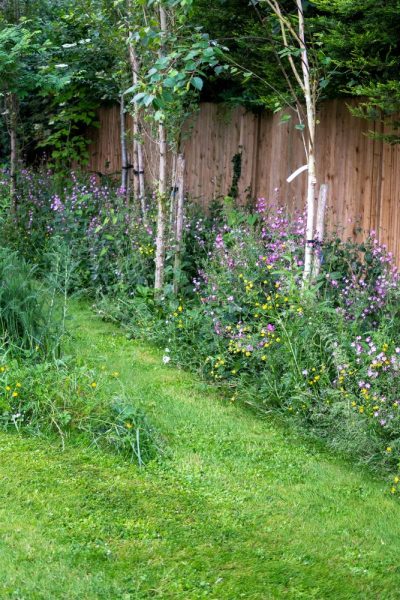 Natalie and Mike sowed both the traditional lawn and the wildflower area from seed. Seeding the lawn is cheaper than turfing it, and it doesn’t require as much watering in the early months.

However, they didn’t replace their overgrown front lawn with either seed or turf. They weeded up the thistles and kept mowing it.

Over a period of a year, the lawn grasses re-established themselves. ‘We kept weeding and kept mowing,’ says Natalie. It now looks like a smart lawn.

Engage qualified professionals to do the work you can’t do

Although restoring a neglected garden can be expensive, there’s a surprising amount you can do on quite a limited budget. In The Secret Garden Strategy, renter Deborah Baker has turned round an old walled garden on a minimal budget.

However it is almost impossible to clear a large area of saplings and thistles yourself. Mike started off thinking he could strim it off, but after half an hour, he had barely cleared a few feet. So they hired a digger and crew to remove it all properly.

And, of course, tree surgery should only be carried out by qualified tree surgeons, because it is highly dangerous.

It’s really worth asking as many opinions as you can find, however. Some tree surgeons just want to cut down trees. Others will advise on shaping and pruning them beautifully.

Natalie and Mike have retained most of the old paths and pathways, but they’ve smartened them up with new materials. 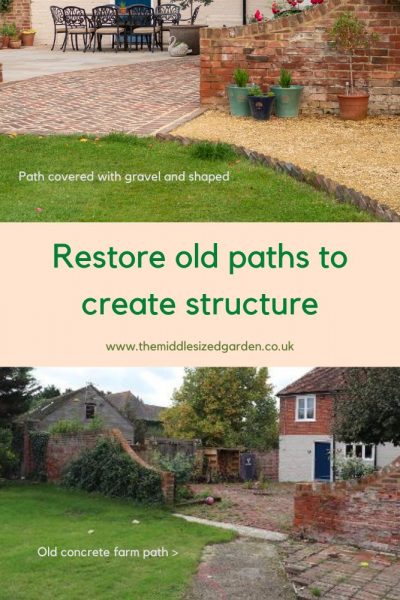 Check the paths in a neglected garden and restore them if the work for you. Mike and Natalie followed the lines of most of the traditional pathways, but they re-covered them and smartened up the shape.

There were also walkways of trampled on soil, worn away by feet and wheelbarrows. One of these ran around a curved bed by the front door. They decided to formalise this path by making it wider and covering it with the gravel aggregate. It’s defined the area and smartened up the border edging. 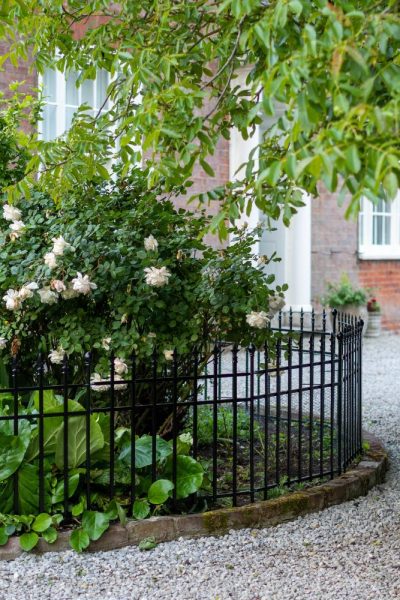 This was a sprawling bed of woody lavender and neglected roses. Natalie and Mike covered the muddy ‘path’ round it with gravel. They recently added railings to deter rabbits, with rabbit proof chicken wire tied to it. The rose was there – Mike and Natalie renovated it.

Mike and Natalie tried to live with a brick patio area outside the back door, but it hadn’t been laid properly and needed constant weeding.

So they decided to re-lay it with limestone and old brick, taking up and re-using some of the old bricks. There’s now a pile of the remainder waiting for another project.

Not only does re-using materials often save money, but it stops there being a sharp demarcation between old and new.

The walled garden behind the house used to be the farm kitchen garden, so it was concealed with high walls.

Now it’s a family garden. Natalie wanted to be able to see the children playing from the kitchen window. So she reduced part of the walls in height and the builder added a curve. The house and garden are now united visually. 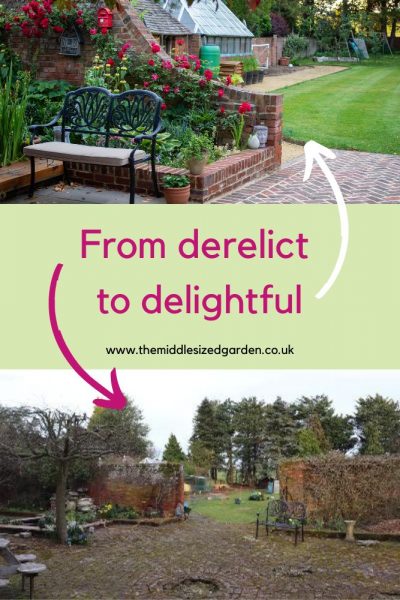 Natalie and Mike have made very few structural changes to the garden, but here they’ve just removed a few courses of bricks. It’s opened up the view of the garden from the house. They’ve retained the shape and size of the original beds, but added an extra layer of bricks to the edging.

See more of the garden in video

You can see Natalie and Mike talking about their garden in this video. 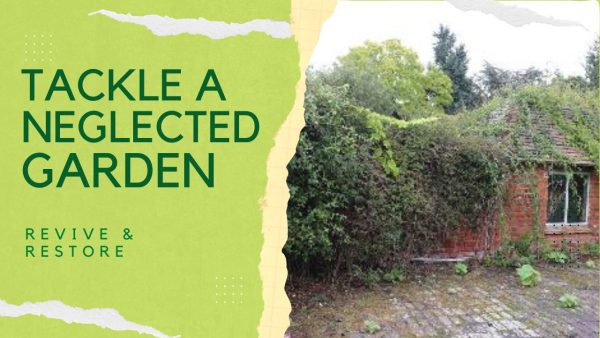 Pin to remember how to tackle a neglected garden

And do join us – see here for a free weekly email with tips, ideas and inspiration for your garden.

Choosing the right plants for growing around patios

GPOD on the Road: Earthwise Garden