When To Plant Hollyhock Seeds For Bright Blooms 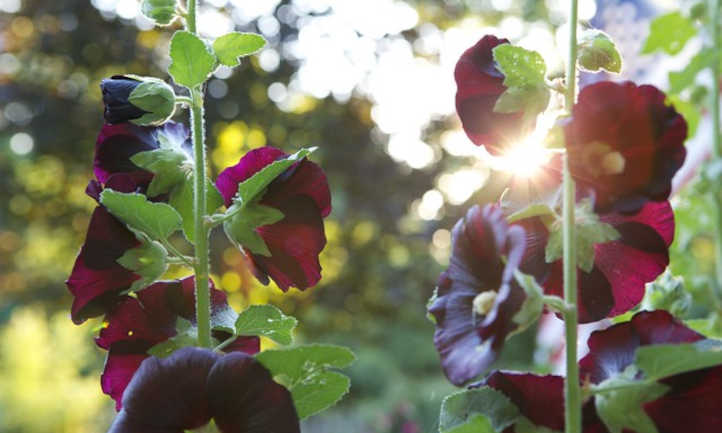 When To Plant Hollyhock Seeds For Bright Blooms

Hollyhocks, scientifically known as Alcea rosea, are gorgeous, eye-catching plants that will draw in pollinators of all kinds. Many people are discouraged from growing hollyhock flowers because they’re biennial and won’t grow flowers the first year. If you don’t mind waiting, they’re pretty easy to grow! The key is knowing when to plant hollyhock seeds.

Growing hollyhocks is well worth the wait since they develop beautiful flower stalks that will likely tower over you. They’re attractive to bees, birds, and other pollinators, so they’re an excellent choice to keep around your vegetable garden to increase food production.

Since they grow several feet tall, they work well along fences or serve as a natural privacy hedge along property lines. You may need to give your flowers stakes to protect them from damaging winds if you live in a windy area.

Let’s take a look at when to plant hollyhock seed so you can add these wonderful flowers to your garden.

Alcea rosea is a stunning yet elegant flower to have in your garden. They’re a classic cottage garden staple because of their pastel hues and delicate look, and you’ll probably find growing hollyhock flowers in a grandmother’s garden.

Although they look delicate, they’re actually a hardy plant. They’re recommended to be planted in USDA hardiness zones 3-8, but they can sometimes be grown in zones 2, 9, and 10 if they’re given special care. If you have harsh winters, plant them in a container and bring them indoors to protect them. If you have harsh summers, choosing an area that receives midday shade will help them.

Hollyhocks are biennial, meaning that they take two years to complete their life cycle, so you won’t see any hollyhock flowers the first year you plant hollyhocks. This discourages many gardeners since many popular flowers are annuals or perennials that develop flowers the same year they’re planted. The lack of flowers doesn’t mean they won’t show up; you’ll just have to wait until next year.

It’s worth the wait! While the first year may not look as gorgeous as you imagined, the second year certainly will. Most hollyhocks are at least 5 feet tall (1.5 meters) and can reach up to 8 feet (2.4 meters). The top portion of the stem will be covered in clusters of flowers in a rainbow of warm colors.

Hollyhocks are called short-lived perennials because they typically only live two or three years, meaning you’ll only see them bloom once or twice. But prune the stalks once the hollyhock flowers start to die, and they’ll grow back the following year. You can extend their lifespan by several years with this practice.

You can easily get hollyhock blooms each year in the cottage garden since the flowers will readily self-seed by dropping their seeds. If you allow the seeds to drop and grow freely, you’ll see new stalks shoot up each year, and you’ll always have continual blooms.

If you don’t want them to reseed, you’ll need to remove spent blooms to prevent seed heads from hitting the ground. Removing the blooms is also how you can save hollyhock seeds so you can plant them elsewhere.

When to Plant Hollyhocks

Hollyhock plants typically bloom in the middle of summer and early fall, so choosing when to plant them is important. You won’t see blooms during their first year, but allowing them plenty of growing time will guarantee that you see them next year.

Hollyhock seeds can take up to three weeks to germinate, so they should be started pretty early in the season to make sure they have plenty of time to grow during their first year.

If you want to plant seeds directly in the ground in the spring, you should plant them one week before the last frost date. Keep a close eye on the weather forecast so you don’t accidentally plant too soon, as the cold temperatures may prevent germination. Spring planting is recommended for those who have severely cold winters.

If you live in a warm climate with a long growing season and mild winters, you may prefer to sow seeds in late summer. Doing so may allow you to have beautiful flowers the following summer if the plants have enough warm days and sun to grow.

You can also plant seeds in containers if you wish to do so. You may be able to extend the growing season since you’ll be able to move the container around as needed to provide the seeds with more sun or warmth as the weather changes each season.

Starting hollyhocks indoors will allow you to grow the plants outside of the typical time frame, allowing you to get a bit of a head start. Plant the seeds in individual pots or cells and use grow lights to provide them with full sun.

You should start seeds indoors in seed-starting cell trays a couple of months before the ideal time to plant transplants, which we’ll talk about next. For a spring transplant, you’ll need to plant seeds in late winter or early spring. For a fall transplant, planting seeds mid-to-late summer should be enough time.

Keep in mind that seeds grown indoors and outdoors will have different times of the year to plant, so you likely won’t get to plant them both at the same time.

Hollyhock seedlings are usually ready to transplant outside into cottage gardens about nine weeks after planting the seeds. Fall is the best time of year to move the seedlings. You can attempt to transplant hollyhocks in the spring, but they may not fare well due to the possibility of a spring freeze.

If you’re unsure about when to move your hollyhock plants, check reputable local plant nurseries. If they have young hollyhock plants for sale, it’s the right time to move them.

How to Plant Hollyhocks

Knowing when to plant hollyhocks is the first step toward getting them in your garden. Now, let’s talk about how to do it.

You can plant hollyhocks in almost any type of soil since they’re not picky. They’re happy with clay, loam, or sandy soils. However, to give your seeds the best chance of survival, you should choose a fertile soil or seed starting mix. The pH of the soil should be between 6.0 and 8.0 for the best results.

You can use a potting mix for hollyhocks you want to grow in containers. For the flowers growing in the ground, apply compost or fertilizer in the spring.

Hollyhocks don’t like soggy soil, so make sure you choose well-drained soil so the water can’t form puddles.

New plants need more water than mature ones, so you’ll need to keep your seeds and seedlings moist. Don’t allow puddles to form or the soil to dry out while your flowers are young. They can tolerate frequent watering if you choose well-drained soil. If you’re growing seeds indoors, make sure the containers have drainage holes in the bottom.

Avoid getting the leaves wet when you water. Hollyhocks are prone to rust disease, which is a fungal infection that can damage your hollyhocks. Making sure that water only touches the soil is an important step to prevent rust disease.

Transplanted hollyhock flowers also need more water than usual for one or two months after being transplanted. Aim to give the plants about one inch of water per week. Once the plants are established in their new home, you can water less frequently.

Mature hollyhocks are somewhat tolerant of dry soil, so if you have to skip watering for a few days or your area is going through a dry spell, they should survive a while with less water than usual.

Hollyhocks are happiest when they receive full sun, which is six or more hours of direct sunlight. They can tolerate partial shade, but in most cases, you’ll see them at their best when they have sufficient sunlight and water.

One situation where your flowers might need partial shade is if you live in an area that receives excessive heat in the summer. Having shade during the heat of the day will protect the flowers and leaves from burning. The shade can come from a tree or building or you can cover them yourself with a row cover.

If you do decide to protect your hollyhocks from the heat, remember that they need at least six hours of sunlight.

To plant the seeds outdoors, prepare the soil with a rake, so it’s not compacted. Scatter the seed evenly across the area if you want a flower bed full of them. Covering the seeds with soil isn’t necessary and they shouldn’t be any deeper than ¼ an inch below the soil. You can lightly cover them with a thin layer of soil if you’d like. If you live in a windy area or have a lot of birds, covering them may be safer.

To plant seeds indoors or intentionally in the ground, plant 1-3 seeds in an indention in the soil. Just as you would with scattered seeds, you can cover them with a thin layer of soil. You’ll need to thin out the seedlings once they sprout if you put more than one seed in the same spot.

Gently water your seeds, making sure that water doesn’t puddle up, and move them around. This is especially important for scattered seeds outside. Be prepared to wait a few weeks for them to germinate and keep the soil moist while you wait.

How to Transplant Hollyhocks

Transplanting hollyhocks needs to be done carefully, so you don’t accidentally damage the plant.

Begin by thoroughly watering the hollyhock the day before you transplant it so the plant will be well-watered. Dig a hole that’s the same depth as the root ball but is twice as wide. Carefully place the seedling in the hole and fill it up with soil. Water it thoroughly to allow the soil to settle. If needed, add more soil.

The top of the root ball should be at the same level as the soil line, so your hollyhock shouldn’t be sunken in or sitting on a little hill.

Q: Are hollyhocks easy to grow from seed?

A: Hollyhocks are easy to grow from seed if you give them full sun and enough water. They will require some patience since you won’t see any flowering until the second year.

A: Yes, you can scatter hollyhock seeds. You don’t have to cover them with soil if there isn’t much risk of wind or birds getting to them.

Q: How long do hollyhocks take to grow from seed?

A: Hollyhocks can take up to three weeks to germinate, and they won’t begin flowering until the second year. If you allow hollyhocks to reseed, you’ll eventually get beautiful blooms each year.