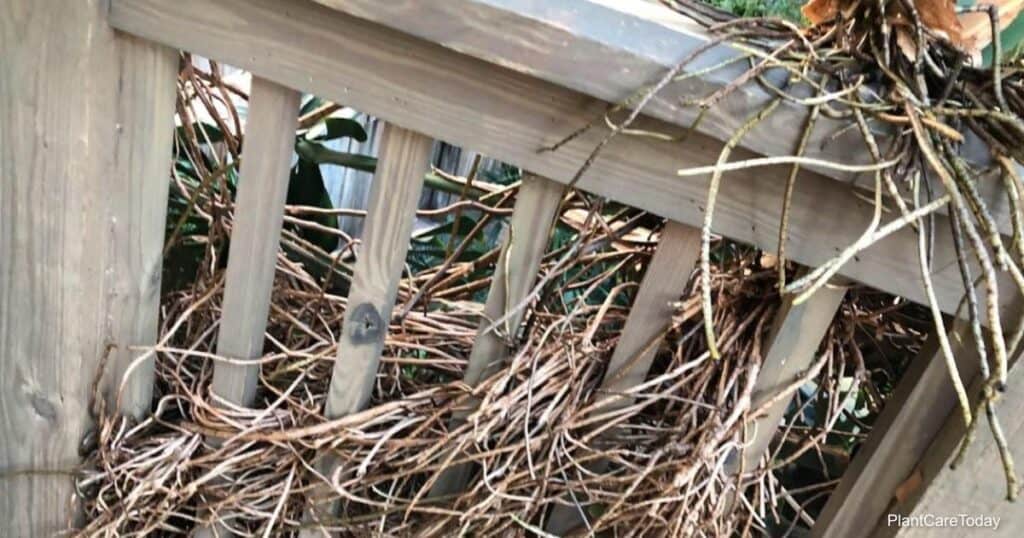 Monsteras are quite popular houseplants that are best known for their foliage.

However, many growers are alarmed when they first notice strange growths on their monstera.

These growths are actually quite normal and are known as aerial roots.

Let’s take a moment to look at what aerial roots are, what they do, and what (if anything) you can do with them.

Aerial roots can be a little unsightly, but they’re perfectly normal on plants such as monstera and are actually beneficial to the plant.

However, there are some things you can do if the aerial roots are bothering you.

Monsteras are epiphytic, meaning they cling to trees in their natural habitat.

As a result, they have 3 different kinds of root structures.

Aerial roots begin as little nubs on the central vine and grow into tendrils that can be several feet long.

As an epiphyte, these aerial roots cling to surfaces to provide support to the plant without causing any harm to the plant or structure they’re latching onto.

The aerial roots can also pull moisture and trace nutrients out of the air.

In some plants, aerial roots can produce offshoot plants (such as spider plants).

In non-epiphytic plants, aerial roots are more parasitic, boring into a host plant and stealing nutrients.

This type of root is similar to aerial roots and serves a similar purpose.

However, these roots bore into the ground if they make contact and add extra stability while also performing a similar function underground as lateral roots.

When you normally think of roots, this type comes to mind.

Lateral subterranean roots spread out underground to provide stability while also collecting moisture and nutrients from the surrounding soil.

The Benefits Of Keeping Aerial Roots

Now that you know what aerial roots are, there are many good reasons to keep them around.

The most obvious reason is that they allow your monstera to grasp onto surfaces for support.

This, in turn, allows the plant to grow taller and have bigger leaves.

Another key benefit is that it allows the plant to pull moisture directly from the air.

This makes transpiration more efficient and means you won’t have to water the plant as often if there’s proper humidity.

Aerial roots can also pull some trace nutrients from the air, such as nitrogen.

While this only accounts for a tiny percentage of what the plant actually needs, it can still help keep your monstera healthy.

Aerial roots are also quite useful when propagating your monstera.

You can cut the plant just below the aerial roots and then plant that.

Remember that an aerial root on its own cannot create a new plant.

The cutting needs to have at least one node and some stem in addition to the aerial roots for there to be any new growth.

Can You Remove Aerial Roots?

While aerial roots provide many benefits for your monstera, it is possible to remove them without harming the plant.

You may wish to remove the roots for aesthetic reasons or because one has a habit of poking out into the room where people keep running into it.

Removing the offending aerial root is easy and only requires a sharp, sterile knife.

Cut the root at its base, where it connects to the vine.

Note that cut aerial roots will grow back over time, so removing them is only a temporary measure.

There is anecdotal evidence suggesting that removing aerial roots on a monstera can slightly stunt its growth, resulting in slightly smaller leaves.

As with many claims in the gardening world, you will have to test this theory out for yourself since there have been no official experiments in a controlled environment to see whether aerial roots have any noticeable impact on foliage size.

Of course, if your primary complaint is that they’re sticking out, consider the type of support you’re using.

Moss poles, bamboo poles, and trellises are good options, but they don’t always convince your monstera to grab hold.

You can manually wrap younger aerial roots around the support, and they’ll usually take hold.

Also, it’s believed that misting moss poles will encourage new aerial roots to seek out the pole and root themselves, although this doesn’t seem to work for everyone.

Another thing you can do with your aerial roots is to wrap them around the plant itself, so they’re out of the way.

Aerial roots that are close to ground level can be directed to the soil, where they’ll add to the plant’s stability and—if young enough—convert to aerial subterranean roots.