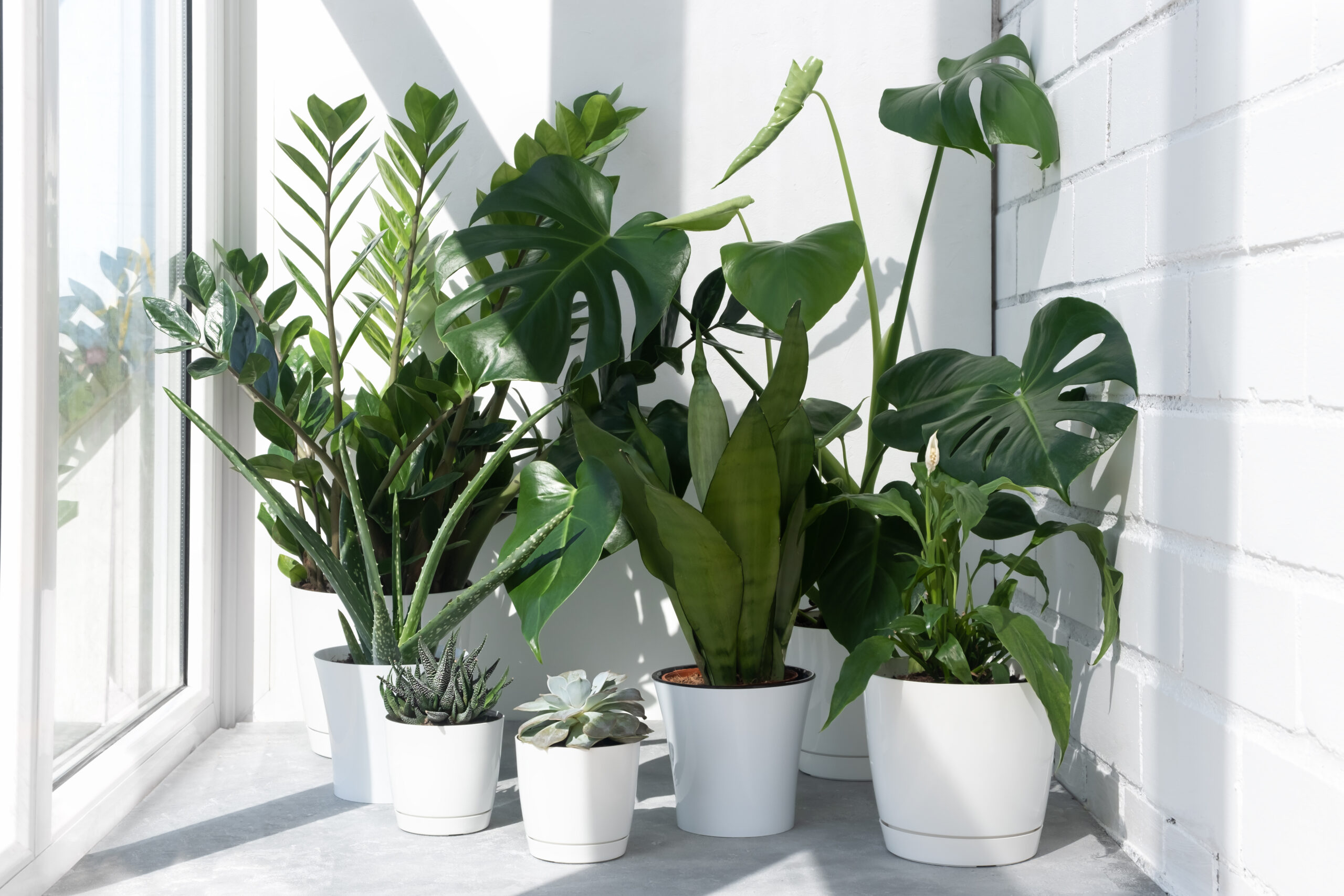 Would you love to have some lush greenery in your home but don’t feel that
you have the expertise? Let’s face it – we have all killed a houseplant – or
two or three….perhaps more! But don’t let that put you off. There’s a
houseplant out there for every type of gardener, however inexperienced or guilty!

If you are self-confessed plant-killer with a shameful
back catalogue of murdered houseplants our Bombproof Houseplants are the
answer.

Or perhaps you are a well-intentioned plant-lover who is
just too lazy, forgetful, or busy to love your plants full time? Then our Low
Maintenance Houseplants will cope with neglect.

Keep
the Aspidistra Flying! The
titular Aspidistra in George Orwell’s novel has typecast this plant as a
Victorian fuddy-duddy. But Aspidistra really deserves more appreciation and the
RHS have awarded it an AGM for good reason. Aspidistra has a cast iron
constitution, hence its common name. Naturally growing in the deep, dry shade
of forests in Japan and Taiwan they can cope with poor light levels and
drought. With its strong, upright leaves it creates ambient greenery in grim
spots where no other plant will survive. There is plenty of evidence to support
the psychological benefits of indoor greenery, so if you have a gloomy room or
a soulless office which could do with some green life to perk it up, then the
Aspidistra is perfect. Although like all plants it needs water, if you forget to
water your Aspidistra she will cope. If you are a determined plant-killer, Aspidistra
is a tough cookie and will treat neglect with disdain.

A born survivor long known under its dated nickname ‘Mother-in-law’s tongue,’ Sanseviera has been justly rehabilitated as a style icon. Its clean, simple lines and boldly striped design make this plant a living sculpture which looks at home amongst modern décor. Sanseviera comes from desert habitats in Africa and Southern Asia and is well adapted to arid conditions with its hard, fleshy leaves which store water. They also exhibit a novel form of photosynthesis. Unlike most plants, which open their leaf pores during the day whilst photosynthesis takes place, Sansevieria keeps its pores firmly shut during daytime heat, reducing water loss through its leaves. As a result, this plant should only be watered every few weeks and is ideal for reckless neglect. However, leaving her soaking in a puddle of stagnant water is like kryptonite to this houseplant superhero. Such appalling treatment is likely to make other houseplants expire in sympathy!

Aptly known as the Eternity Plant, Zamioculcas is practically unkillable. Stiffly upright and armoured with thick, dark green leaves, this warrior of a plant is not easily defeated. Its dark foliage is rich in chlorophyll making it perfect for rooms with lower light levels. And if you fancy something striking, there is even a variety with leaves so dark they are almost black. The ZZ plant is ideal for the inattentive gardener. Swollen stems and roots hold moisture and nutrients so it is rarely hungry or thirsty. Before giving it a drink ensure that the compost has dried out completely.

The adaptable Aloe Vera has spread far beyond its native habitat in the Arabian Peninsula and become naturalised across the world in warm climates. It will adapt equally well to the warmth of your home, as long as you keep it in a bright place and go easy on the watering. Known to the ancient Egyptians as the ‘plant of immortality,’ lazy gardeners should have a job trying to kill this one. Equipped with thick fleshy leaves full of water-storing gel and covered with a waxy skin the Aloe only needs an occasional drink when its gravelly compost is completely dried out.

The crazy candelabra of Euphorbia abyssinica is capable of growing into a tree reaching ten metres in the wild. Don’t worry! It won’t reach such unwieldy proportions as a houseplant, but it is a fast growing succulent capable of becoming a large and striking specimen. Boldly columnar with multi-branching, ribbed segments edged with spines, the Desert Candle is a dramatically sculptural plant. It makes an excellent solitary centrepiece or can be used to provide effective contrast amongst a group of softer leaved plants. Give Euphorbia abyssinica a bright position growing in gritty compost and all it needs is an occasional splash of water when the roots are dry.

The cool white spathes of the Peace Lily create a tranquil atmosphere and reflect light in dim corners where other houseplants won’t thrive. This easy-going plant is native to tropical rainforests of the Americas. An inhabitant of the understory, it is adapted to lower light levels. If the idea of caring for houseplants induces anxiety, the undemanding Peace Lily will calm your fears and live quietly and contently in partial shade only asking that you water it enough to keep the compost just moist.

Originally from one small island in French Polynesia, Epipremnum has bullied its way across the tropical world to become an exotic pest in wild habitats. But this invasive brute makes a perfect houseguest as its tough constitution shakes off terrible growing conditions making it almost impossible to kill. It also has the advantage of being a climbing vine, which lends it adaptable to different types of display. Its sprawling stems are equipped with aerial roots which will attach themselves to any grippy surface, including your wall if you let it! More usually, it is grown up a pole lending height to indoor plant displays and creating columns of greenery which don’t occupy much space. Alternatively, it can be left to trail out of a pot and grown as a hanging plant.

Epipremnum’s other
strengths include its ability to tolerate lower light levels. Finding good
light spots for houseplants can be a challenge and light intensity plummets
dramatically as you move away from a window. But Epipremnum tolerates lower light
levels and will even retain its golden variation. It will also put up with lazy
watering and should only be given a drink when the compost is drying out.

Perfectly at home in scorching deserts, Cacti won’t get in a prickly mood when you turn your heating up! Many houseplants come from tropical regions with high humidity and the dry atmosphere of your centrally heated home during the winter months may not be the most hospitable environment for them. But cacti love to be warm and dry. These resilient characters are basically water-holding stems that have ditched their leaves for spines. They have frail and shallow root systems, but these roots will quickly grow in response to rainfall. So, if you habitually forget to water your plants, Cacti will thrive on your negligence as it will give them the chance to dry out between waterings. Grow them in bright light on a south facing window sill, always using a proprietary cactus compost.

Long-living
Sempervivum is
commonly known as ‘houseleek’ but its Latin name literally translates as
‘forever (semper) alive (vivum)’. These rugged little survivors are used to coping
with deserts, stony ground, and sunny rocks. They are great for beginners
because they come in a fabulous range of colours and textures and offer the
opportunity to gradually amass a varied collection. As well as their decorative
foliage, attractive spikes of starry flowers are borne on mature rosettes.
Although the mother rosette dies after flowering it produces plenty of baby
plants to replace it.

With a bit of creative flair sempervivums can make wonderful displays. Cram them into terracotta pots, old teacups, or rusty tins for an eccentric and fun exhibit. Any recycled container will do, provided you make a drainage hole in the bottom and use a very gritty compost. Make the holes by gently tapping a nail into the bottom of the container.

Keep your Sempervivums on
a bright sunny windowsill and they don’t need much care other than removing
dead rosettes and old leaves. In the summer months they can be left outside. An
occasional feed with cactus and succulent fertiliser will give a boost to
growth. But avoid high-nitrogen feeds as these will make your plants grow soft
and become liable to rot.

You might be scared of spiders but there is nothing intimidating about the Spider Plant, Chlorophytum comosum. Spider Plants are perfectly unfussy creatures which adapt to a wide range of conditions, although unlike spiders, they don’t like to hide in dark corners. Grow your spider plant in a bright spot and water regularly but allow the compost to dry out between drinks. They look great cascading from a shelf or tumbling from a hanging pot.

So even if you don’t have green thumbs or lots of time, there’s a host of undemanding houseplants which will beautify your home without requiring much skill or effort. For more ideas browse our Houseplant Section.