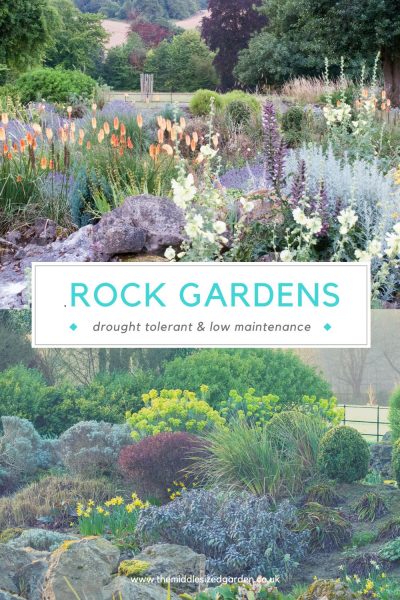 A rock garden was once a quintessential element in both grand and smaller British gardens. 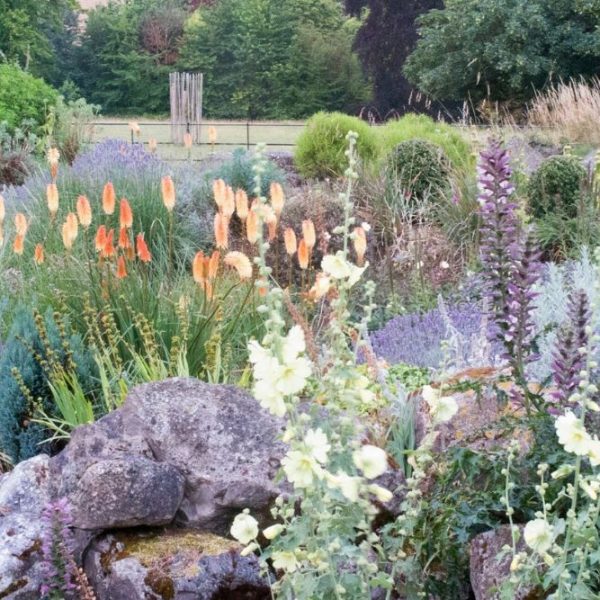 Then, like so many popular trends, they became neglected or created without any real thought or understanding. Until recently, the rock garden – or rockery – had almost disappeared from the garden designer’s palette.

But a few years ago, garden centres began to report increasing sales of rocks and alpine plants. The Guardian newspaper predicted that a ‘rockery revival’ was underway. Rocks, pebble mulches and gravel gardens started to appear at the garden shows, such as Amanda Grimes’ ‘Punk Rockery’ garden at RHS Hampton Court last year. 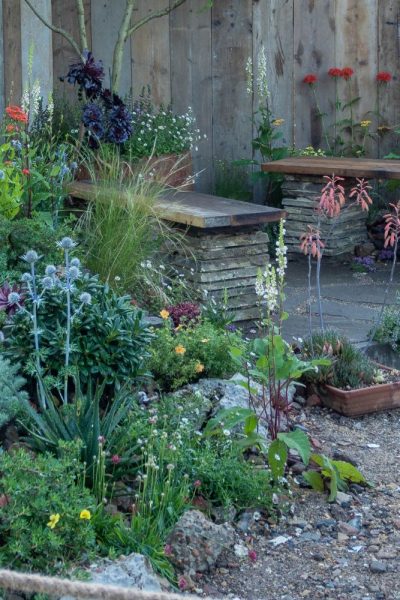 So I talked to Amicia Oldfield of Doddington Place Gardens, which was short-listed for Historic Houses Garden of the Year last year. It has a superb rock garden, dating back to Edwardian times and renovated 12 years ago. It has done well in the UK’s recent record-breaking drought and heat.

It’s quite large – around half an acre, set in ten acre gardens, but there is inspiration there for our own smaller rock garden areas. You can visit Doddington Place Gardens between April and September. It’s open to the public twice a week. 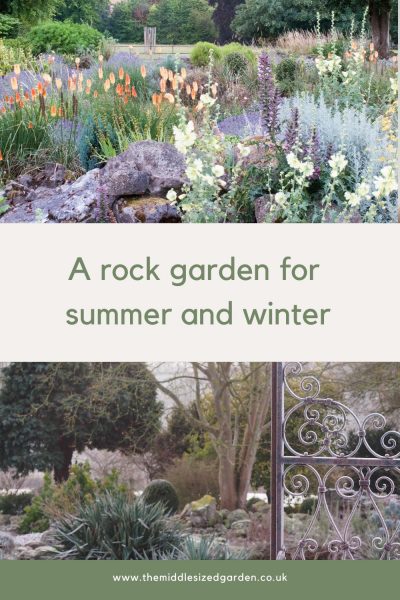 The rock garden at Doddington Place Gardens looks good in summer and winter. It never needs irrigating and most of the plants have been there for 10 years or more.

How to plan your rock garden

Amicia suggests that you start by visiting other rock gardens. If they’re in major gardens, such as Doddington Place Gardens, they will be on a much larger scale, but you can still take ideas from them.

And Amicia also suggests looking at a small section of a bigger rock garden. There’s an area with alpine plants just by Doddington Place Garden’s steps that would translate beautifully into a small town garden, for example. 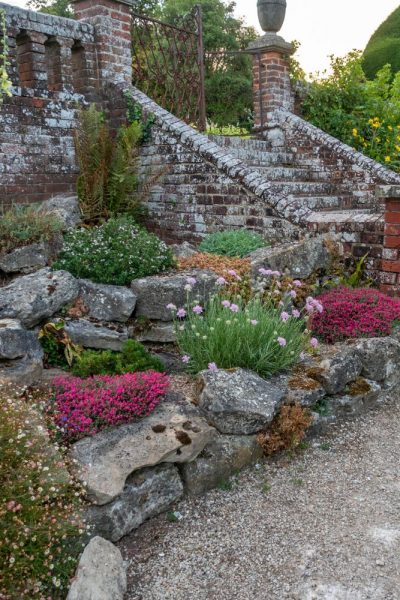 This small area next to the steps at Doddington Place Gardens is planted with alpines from Copton Ash Nurseries. It shows how you can take inspiration for a small garden rockery from a section of a larger rock garden.

You can also look at Instagram, Pinterest and other social media platforms, using the hashtag #rockgarden or #rockery. Not all will necessarily be ideal examples of rock gardens, but it will help you decide what you like and what you want to avoid.

Where to place your rock garden?

A rock garden is an ideal way to deal with a slope. Even a small bank can be difficult to plant or water. And it’s often cheaper than putting up a retaining wall or terracing the space. (There’s advice on how to plant on a slope here.) 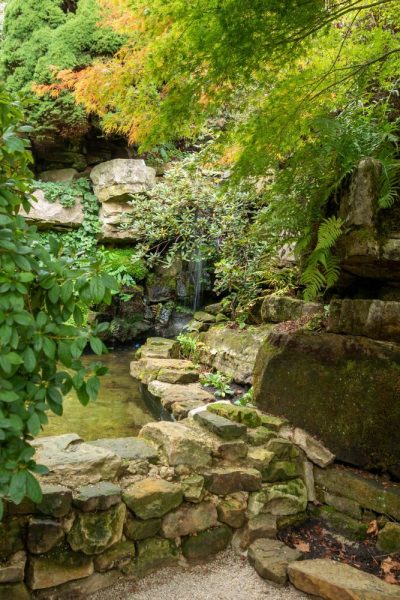 Instead of terracing a slope, you can turn it into a rock garden like this one at Leonardslee in Sussex. Leonardslee is famous for its rhododendron collection, and there are tips here on how to grow rhododendrons from their head gardener.

But you don’t necessarily have to have a slope in your garden. 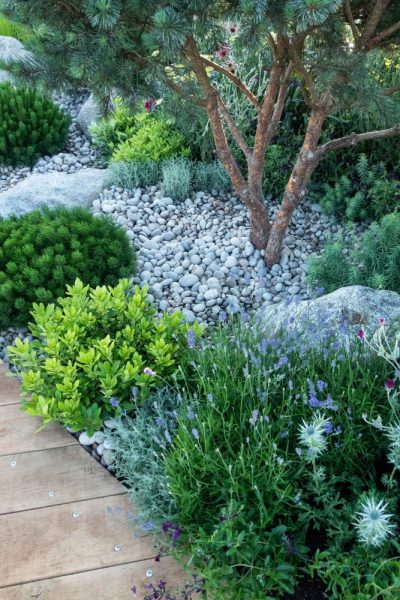 You can create a rock garden area even if you don’t have a slope, like this show garden which uses a rock and pebble mulch, adding height with a few rocks.

Measure out the space and decide how many rocks you need. You can either pack rocks closely together or space them out, separated by a pebble mulch or gravel.

Garden designer Posy Gentles created a rock garden in her long, narrow town garden in order to create more height in an area. Posy was given the rocks by someone who wanted to get rid of them. So if, like Posy, you’ve acquired rocks free through one of the online exchange forums, then the size of the rock garden will probably be dictated by how many rocks you’ve got. 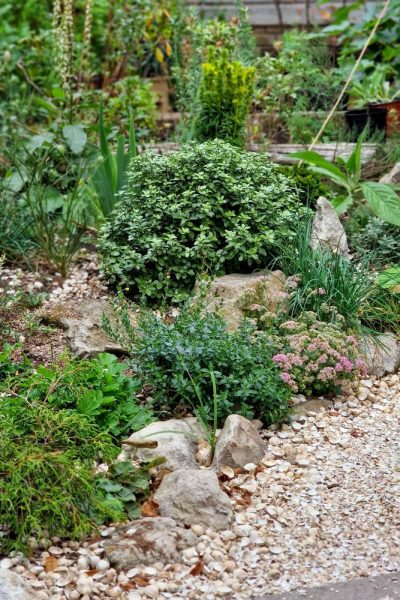 This rock garden border in Posy Gentles’ garden adds height to what would otherwise be a flat area. Posy has used a seashell mulch. It’s a byproduct of the food industry, so isn’t mined like gravel. Find out more about using seashell mulch in your garden here.

How to choose the rocks

Research your local stone, as that will look more natural in your landscape.  You may not be aware of what your local stone looks like, but an internet search will quickly throw up huge differences between -for example – smooth Scottish pebbles, rugged Welsh slate and creamy Cotswold stone. It’s likely that at least some buildings in your area will be made of local stone. 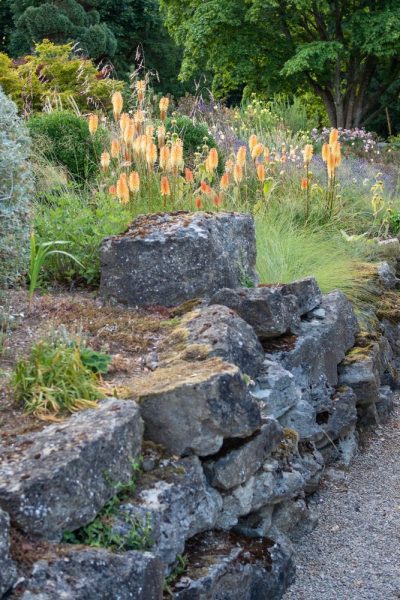 At Doddington Place Gardens, the rocks are local Kentish ragstone. Many houses are built of it locally – it’s a darker grey than York stone or Cotswold stone. 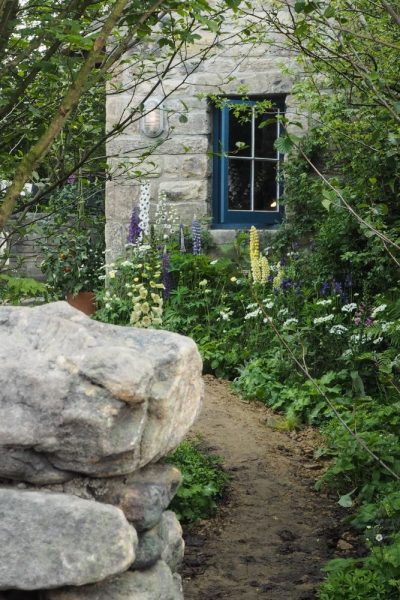 This RHS Chelsea show garden designed by Mark Gregory used pale grey York stone to reflect its theme of ‘Welcome to Yorkshire’. It’s paler than the Kentish ragstone in the photo above it.

Put ‘buy stone rocks near me’ into a search engine and lots of options will come up.

Rocks can be expensive to buy, but there are also options for getting them free and second-hand. Posy Gentles suggests you try local marketplaces, such as Freecycle, Freegle or Facebook Marketplace to look for people who want to get rid of rocks in their gardens. ‘You can often get them for free if you collect them,’ she says.

Of course, buying or obtaining rocks locally won’t guarantee that they’re local rocks. However, if you’ve done some research, you’ll have a good idea of what would look most appropriate.

Let the rocks develop a patina of age – don’t clean moss or lichens off them. Both are important to the eco-system and give your rock garden a natural look.

How do you arrange rocks in a rock garden?

The RHS says that stones should be buried at about a third of their depth, tilting backwards to mimic how they would emerge from the landscape naturally.

If you’re constructing a slope then you can use a pile of brick, stone or rubble as a base. The RHS suggests covering with upturned turf before adding soil and compost. It stops the compost and soil from falling right down between the cracks of the rock.

Posy once worked at a garden where the owners bought a pile of bricks which they’d intended to use for a project. However, they never got around to it. Plants began to colonise the pile of bricks and it is now effectively a rock garden.

And Posy’s own rock garden only raises the level of the soil by about six inches, so you don’t need to create a cliff face.

How to plant a rock garden

Start with the evergreen structure. 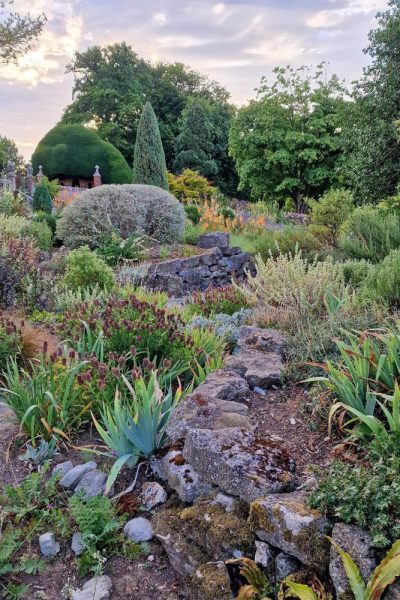 At Doddington Place Gardens, the rock garden is planted with a mix of alpines, evergreen shrubs and vertical interest.

Miniature conifers come with good shapes and leaf colours, but the RHS warns that you should check that they are ‘miniature’ rather than dwarf, as dwarf conifers are often very slow-growing but may eventually get too big for the space. Check the final size of shrubs too, to see they won’t outgrow the space. There’s more advice on growing and choosing conifers here.

Rock gardens partly evolved to display alpine plants, so it’s worth looking for a supplier of alpine plants in your area and asking their advice on which ones are best in your climate or soil. Many garden centres also have an alpine plants sectin.

Many other smaller, drought-tolerant plants also work well. Sedums (stonecrops), sempervivums and other succulents are particularly good, but check which ones will survive your winters. 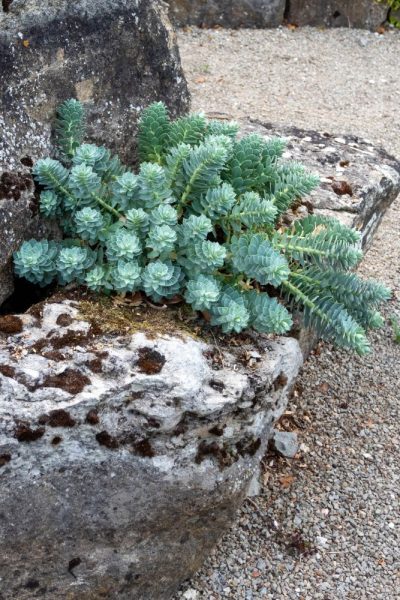 Sedums and sempervivums look very at home growing out of the rock.

Rock gardens make good use of vertical space so remember to include both spiky plants and trailing plants. 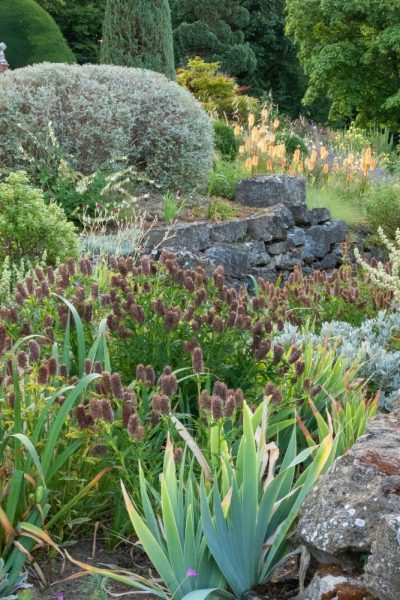 There’s a good contrast of shapes here at Doddington Place Gardens, so even though only one is in flower (the knipfofia at the back), the planting still works well.

Many original bulb species came from mountainous places. So smaller bulbs, such as wild tulips and miniature or species daffodils look good in rock gardens. You can also plant full size bulbs. 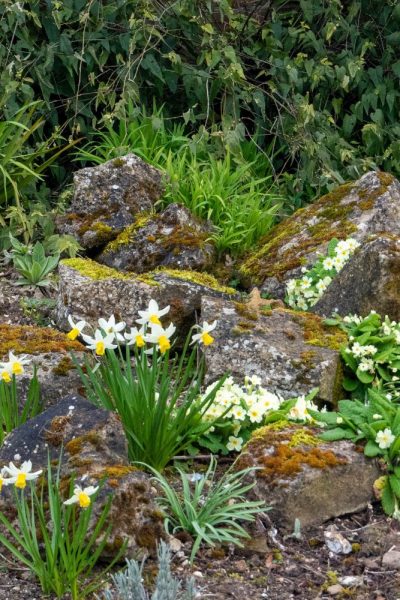 Both Amicia and Posy think there is already enough shape, structure and interest in a rock garden. It doesn’t need sculpture. But use the sculptural shapes of nature. At Doddington Place Gardens, interesting rocks and fallen trees create wonderful sculptural shapes. 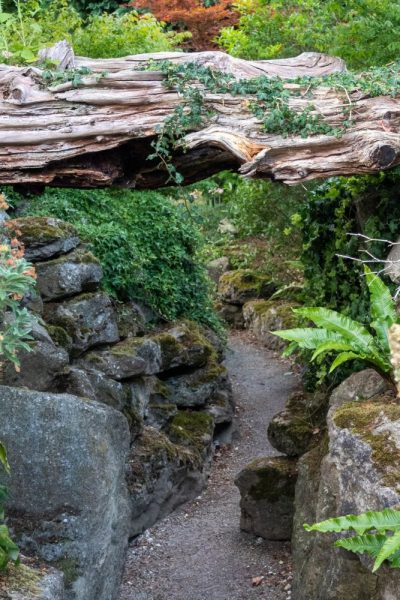 This fallen tree creates a wonderfully sculptural element across a sunken path at Doddington Place Gardens. 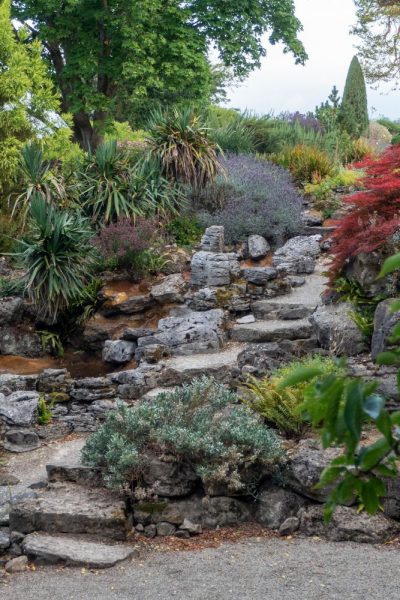 The rocks have been positioned to create natural shapes in rock ‘sculptures’ at Doddington Place Gardens. There are also ponds, which are a wonderful haven for wildlife. 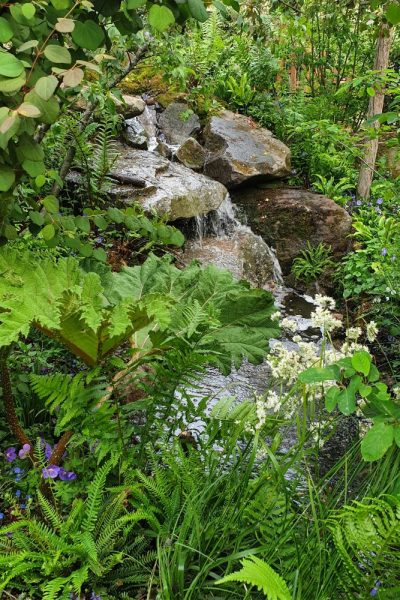 A waterfall is a natural choice for a water feature in a rock garden. This is in the woodland garden designed by Davies & White with the Duchess of Cambridge at the RHS Chelsea Flower show. There’s more Chelsea garden inspiration here.

Should you use a weed suppressant membrane?

You will often be advised to include a weed suppressant membrane when putting together your rock garden. Don’t take this advice.

I belong to a number of professional gardener Facebook groups, where people discuss issues that come up in their work and share solutions. Recently a gardener was putting together a rockery for a client who wanted her to use a weed suppressant membrane. She asked the group’s opinion, and everyone, without exception, advised her against it. And it’s very rare to have everyone in agreement!

Is a rock garden low maintenance?

There is some debate about whether a rock garden is low maintenance. If you choose the right plants, it is drought resistant. They have never had to water the rock garden at Doddington Place, for example.

The plants are usually compact and so don’t tend to get out of hand, nor do they frequently need replacing. Doddington Place’s rock garden was replanted over ten years ago, and most of those plants are still thriving.

However, some gardeners say that the open aspect of a rock garden attracts more weeds than a crowded herbaceous border. You may have to weed more often. But if it’s not a large area, then that may not be a problem.

And do join us – see here for a free weekly email with more gardening tips, ideas and inspiration.