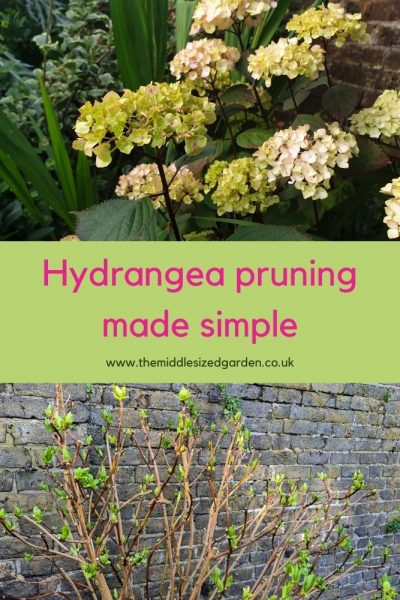 The first  question anyone asks about pruning hydrangeas is ‘when should I prune?’

The Royal Horticultural Society says that you should prune hydrangeas in late winter or early spring. That’s February or March in most of the UK.

Others will say you shouldn’t prune until March. The dried hydrangea flower heads give the buds below some protection from very bad weather. A sudden bout of snow and ice in early spring may damage the newly exposed buds.

And some gardeners prune their hydrangeas even earlier.

You know your own weather.

So the simple answer is that if you regularly get very bad spells of snow and ice in late winter or early spring, then leave pruning your hydrangeas until later. The occasional late frost is unlikely to do much damage, but a prolonged bout of freezing weather could damage newly exposed buds.

But if you generally have reasonably mild winters, then you can prune your hydrangeas when it is most convenient to do so. One good sign is when new green growth is emerging from the buds. 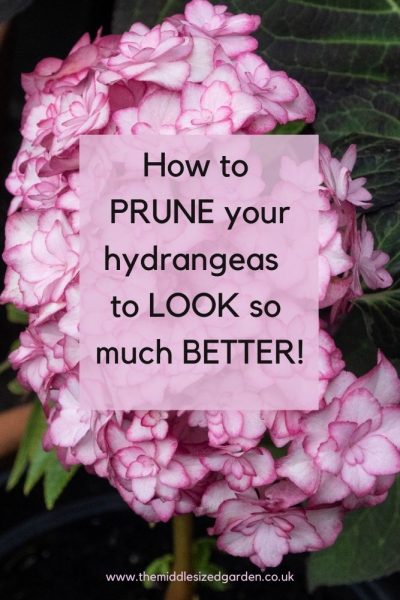 If you have an evergreen climbing hydrangea (Hydrangea seemannii), then prune immediately after it flowers in summer.

Hydrangeas are pruned differently according to what type of hydrangea they are.

Hydrangea expert Roger Butler of Signature Hydrangeas told me that the number one reason for hydrangeas not flowering is that they haven’t been pruned properly.

So if you’re nervous about pruning hydrangeas or can’t identify your hydrangeas properly, there is one method that will always work.

Simply dead head the hydrangeas, snipping off the dried flower head to the first pair of fat buds below it.

Then take out any dead stems or any stems that are crossing over.

That’s all there is to it. It’s a minimalist approach to pruning hydrangeas, but it will work.

My friend, Emma, who has a magnificent display of hydrangeas, has even whizzed over her hydrangeas with a chain saw. I don’t recommend this, but it’s a thought.

The reason why some hydrangeas are pruned differently from others is that some flower on old wood and some on new.

Flowering on new wood means that the plant grows the stem with the flower on it within one year. If you prune them back in spring, they’ve still got time to grow new wood with buds on it.

Plants that flower on old wood set their buds last year. So if you chop them back too far in spring, you could be cutting off the buds. You wouldn’t have any flowers this year.

That’s why simply dead heading back to the first set of buds works for both plants flowering on old wood and those flowering on new. You’re not removing any new buds, regardless of when they were made.

But sometimes hydrangeas look so much better with a ‘proper’ prune. 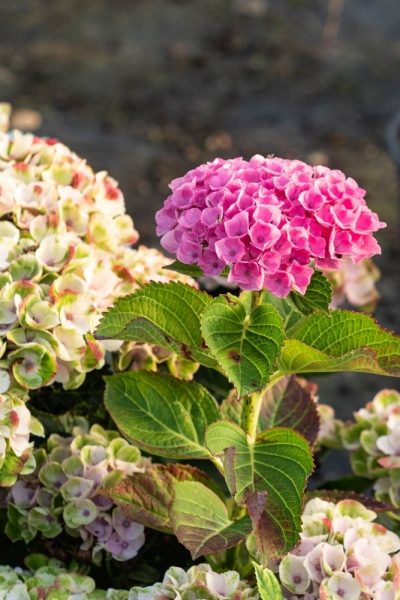 The hydrangeas with round heads, covered with tiny ‘petals’, are called mop heads (Hydranea macrophylla). Most flower on old wood or a mix of old and new wood.

Once you’ve learned the basic pruning method, try one step further and start to think about shaping your hydrangea and where you want the flowers.

I asked garden designer Posy Gentles for her advice. Posy also restores and renovates gardens. Good pruning is a big part of turning an overgrown muddle into a beautiful garden.

How to tell new wood from old wood

Posy says that the new wood is darker than the old wood.

And the newest wood of all are the stems which are tipped with a single leaf bud. Don’t cut these back. 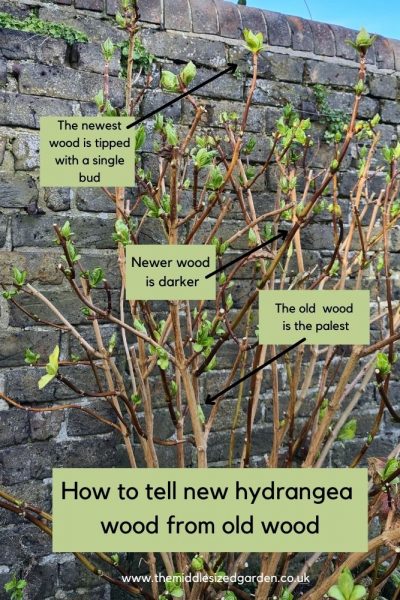 The three ways to prune hydrangeas

When it comes to pruning hydrangeas, there are three categories. The first are hydrangeas that need little or no pruning.

The third category can be cut almost down to the ground, also in early spring.

How to prune oakleaf hydrangeas

Firstly, some hydrangeas need only minimal pruning. Just do that basic dead heading and removing dead or crossing stems.

These include oakleaf hydrangeas (Hydrangea quercifolia). If you do want to give them a major prune, only do this immediately after the flowers have faded, because they flower on old wood. But you can do the light tidy up in spring or you can simply leave them alone. 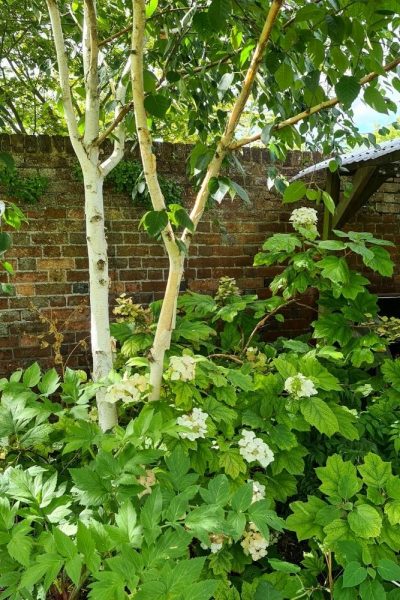 The evergreen climbing hydrangea (Hydrangea seemannii) also fits into this category. Climbers often climb further than you want to. So if Hydrangea seemannii is climbing into your gutters or covering a window or door, you can cut that back any time. You don’t want flowers there anyway, so it doesn’t matter when you cut it back.

How to prune mophead and lacecap hydrangeas

Hydrangea macrophylla are commonly known as the mophead and lacecap hydrangeas. These usually flower on old wood. So if you cut off too much or prune at the wrong time, you can lose this year’s flowers. Don’t let that intimidate you, though. 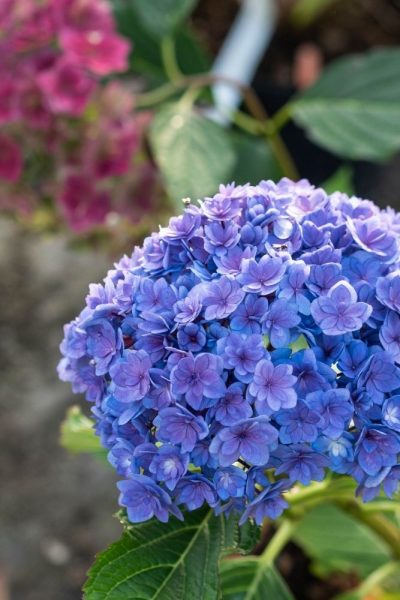 An unknown blue mophead hydrangeas. Mopheads are the only hydrangeas that go blue, and you need to grow them in the right soil.

Posy says that good pruning makes a big difference in a garden.

Posy explained how she pruned two hydrangeas in her garden. One is quite an old lacecap hydrangea which had got congested over the years. 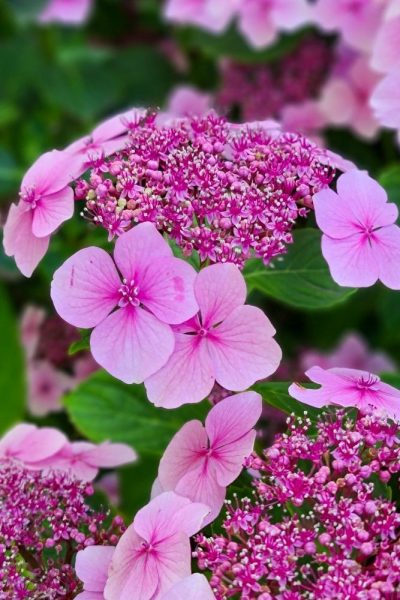 Lacecap hydrangeas have tiny little flowers in the centre and a ring of sterile ‘petals’ around the outside.

‘Look at the overall shape. If you only ever dead head down to the first set of fat buds, then you’ll get flowers round the edge and a tangled mess in the middle.’

Posy wants an even display of flowers all round the shrub, with  flowers lower down at the front and higher at the back, to give the hydrangea a nice rounded shape.

She suggests you start with looking down into the shrub, to see where you could cut thicker, paler older stems out from the base. That will give new growth a chance. Cut up to a third out, although you may not need to remove that much. 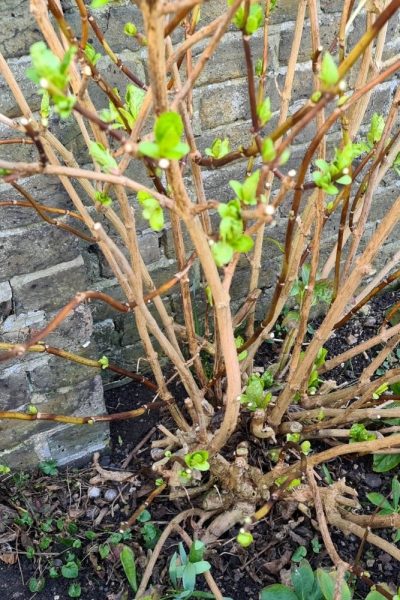 Look down into the base of the shrub. You can spot thicker, older wood and remove it from there.

In order to get a nice rounded shape, she cuts back harder at the front, to the second or third pair of fat buds. These also have flowers.

She also removes any older stems that have been pruned back so many times, they’ve grown into a less attractive shape.

How high do you want your hydrangea?

Posy took a slightly different approach to the second hydrangea, a mophead.

This one adds height and a sense of division around half way down the garden.

To achieve this she leaves most of the old wood framework where she needs the height, simply dead heading back to the first two fat buds and removing any dead wood.

She’ll usually take out one of these taller stems completely from the ground, to allow space for a new tall stem to grow. But to keep the height, she leaves the others.

How to prune Annabelle and Incrediball hydrangeas

The third category are the hydrangeas that can be cut almost completely to the ground. 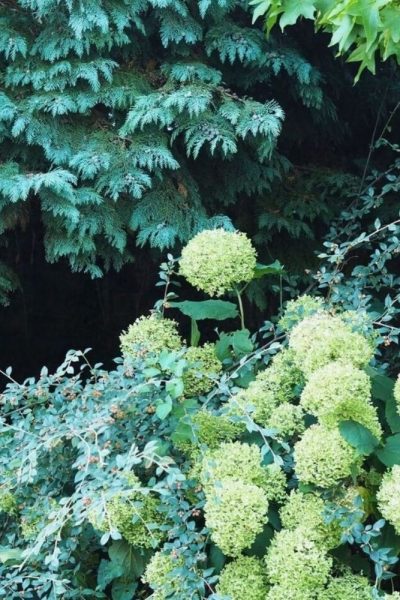 ‘Annabelle’ is one of the most popular hydrangeas today as is Incrediball.

You can either give paniculata or arborescens hydrangeas the simple basic hydrangea trim. Or you can cut them down to  around 10” above the ground in spring.

At this point, it’s also a good idea to cut out any congested or crossing stems.

Your hydrangea should sprout new growth with big flower heads. Sometimes the stems will be quite slender, however, so it may need supporting. 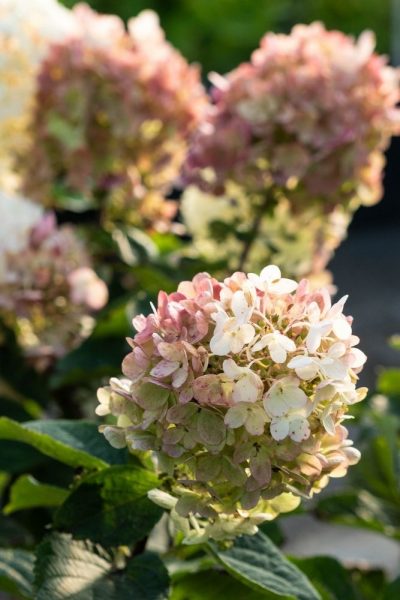 How do I prune hydrangeas in pots?

Prune hydrangeas in pots the same as you would if they were planted in the ground.

So find out what kind of hydrangea they are. Then think about what shape you want them to be. 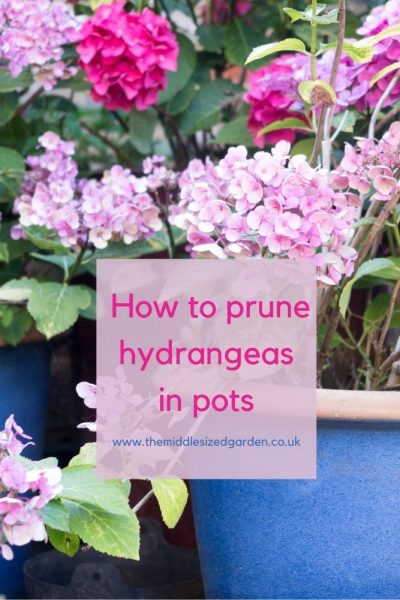 What happens if I don’t prune my hydrangeas?

If you forget to prune your hydrangeas for just one year, you probably won’t notice.

But after a few years, your hydrangea may get too big, too tangled or its flowers will be smaller and less showy.

You can restore it to a beautiful shape by pruning it properly, but it may take a few years to get the shape back.

You probably only need a good pair of secateurs, but make sure they are sharp. I bought a pair of Felco secateurs nearly twenty years ago. They’re still going strong.

Even good secateurs go blunt after a season of use, so you can sharpen them with a sharpening stone.

If there’s a particularly thick old stem, you may need loppers. I was sent Wilkinson Sword Ultra-light Loppers free for review several years ago. I really like them, and they’re still going strong.

And I think it’s worth trying to protect your fingers with a pair of gloves. I have, in the past, snipped quite deeply into my own finger. So be careful! I always buy Showa gloves, although I’ve also been given Fiskars gloves free for review and have found them good, too.

Note that links to Amazon are affiliate, see disclosure.

I visited one of the top hydrangea growers in the UK, Signature Hydrangeas, to find out what you really need to know about growing hydrangeas.

And because there are so many myths around hydrangeas, I also asked Naomi Slade, author of the beautiful book Hydrangeas, to help me to sort the myths from the facts.

Pin to remember how to prune hydrangeas

And do join us, see here for a free weekly email with tips, ideas and inspiration for your garden.