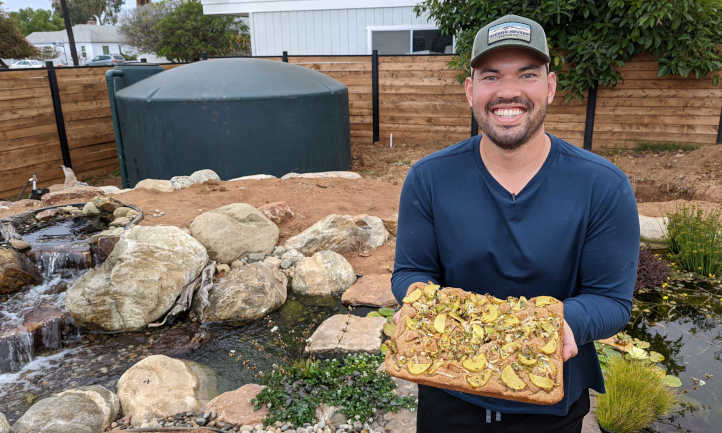 Kevin and Jacques love to bake bread (like this pocaccia bread recipe) with the wheat harvests from the Epic Homestead, and there’s a really good reason for that. There is nothing quite as uniquely satisfying as enjoying the literal fruits of your harvest… or, in this case, berries, as wheat produces seeds called wheat berries that can later be ground into flour for baking fresh, whole-wheat bread.

But remember, this is a team spearheaded by the Potato Daddy himself. After all of the hard work that Kevin and Jacques went through to harvest, dry, and thresh the wheat, they also harvested some great Yukon Gold potatoes, nice fat leeks, big heads of garlic, and a selection of fresh herbs from the homestead. With a hand-raised sourdough starter delivered by Kris, Epic Gardening’s Head of Customer Experience, it was time to assemble a potato-leek focaccia bread… or “pocaccia”!

Once all the ingredients were at hand, Kevin and Jacques went to work and produced a truly delicious whole wheat focaccia recipe that everyone can enjoy. You don’t technically have to harvest, thresh, and mill your own wheat to make it (although we’ll certainly confirm that it is incredibly satisfying if you do!) But even if you opt to use store-bought whole wheat flour, we can confirm that this “pocaccia” is well worth your time and effort because it’s savory, satisfying, and so, so good.

1. Place the starter, salt, and water in a large bowl and stir until it is mostly dissolved, then add flour and mix it in completely. NOTE: When using fresh flour, you will need less water as it will soak up the water more effectively.

2. After allowing the dough to sit for at least 30 minutes, try to fold it by pulling up the sides and tucking it into the center of the dough. This gives the gluten some stretch allowing it to hold together better. The dough will be shaggy and sticky, so don’t try to over-add extra flour.

3. Drizzle with olive oil and rub it all over the dough. Don’t go crazy with oil here, as we will be adding more later. Cover the dough with a towel and place somewhere warm (ideally 70ºF/21ºC) for about 4-8 hours. If it’s cold, it will take longer to double, and if it’s warm it will double faster. It doesn’t have to be exact, but just ensure that it roughly doubles. This process depends on a lot of factors, so it is impossible to be exact – you have to wing it a bit!

4. Once the dough has doubled, you can prep a metal baking pan by pouring 2 Tbsp. of oil into the pan. Tilt the pan to spread it across the entire surface. If you are using a glass dish instead of a metal pan, apply butter to all interior surfaces of the glass dish as it will cling to the glass better and prevent the bread from sticking later. Once buttered, add 2 Tbsp. oil into the glass container as you would have with the pan and tilt to spread it across the bottom

5. Add about a tablespoon of olive oil to the focaccia dough. If you have flavored oil, use this to give it a flavor boost. Deflate the dough and scoop it out of the bowl and place it onto your baking dish. Fold the dough a few times until it forms a rough rectangle shape in the center of the dish. Make sure that the seam from your folds is facedown in the pan so the dough spreads nicely.

6. Make sure your dough is oiled up and then allow it to rise for another 4-6 hours. You want the dough to fill out the rough shape of the baking dish. For this step, Jacques likes using a seedling heat mat to help speed things up, which can get it to rise in 2-4 hours instead.

7. At this point if you haven’t started to roast your garlic, roast it while the dough finishes rising. You want the garlic fully roasted and squishy to the touch.

8. About 30 minutes before the dough is almost done rising, set your oven to 425ºF to preheat.

9. Now it’s time to prep your toppings, which can be pretty much anything. Of course, we aren’t just making focaccia; we’re making Pocaccia! Pull out a medium-sized Yukon gold potato and shave it into thin slices that will cook quickly as the bread bakes (we recommend half-moons sliced on a mandolin for perfectly-even slices). Cut your leeks into small rounds. Combine the potatoes, leeks, and herbs in a bowl, and squeeze out all of the roasted garlic into the bowl. Mix the ingredients well, making sure the garlic is spread across all the sliced potatoes. This is also a good time to add seasonings like salt and pepper (to taste).

10. Get some oil on your hands and then start dimpling and stretching the dough out so it completely coats the bottom of the pan. You will feel the dough squish and deflate as you do this. Leave some dimples on the surface of the dough when finished. Drizzle a little more olive oil across the dimpled dough, and then evenly spread your potato mixture out across the top of the dough. Finish with a hearty sprinkle of salt.

11. Place the pan in the oven and bake for 25-30 minutes. Check to make sure it is fully cooked before you take it out of the oven. The edges should be browned and appear crispy. The potatoes should be fully cooked. In this case, it is better to let it cook for 5 minutes extra than to undercook it. Remove from the oven and let it rest for at least 10 minutes, as this will make removing it from the pan easier.

Slice your bread up and enjoy the savory, garden-fresh taste of pocaccia victory!

Here’s a good look at Kevin with that delectable “pocaccia”!