The Best Plants for June 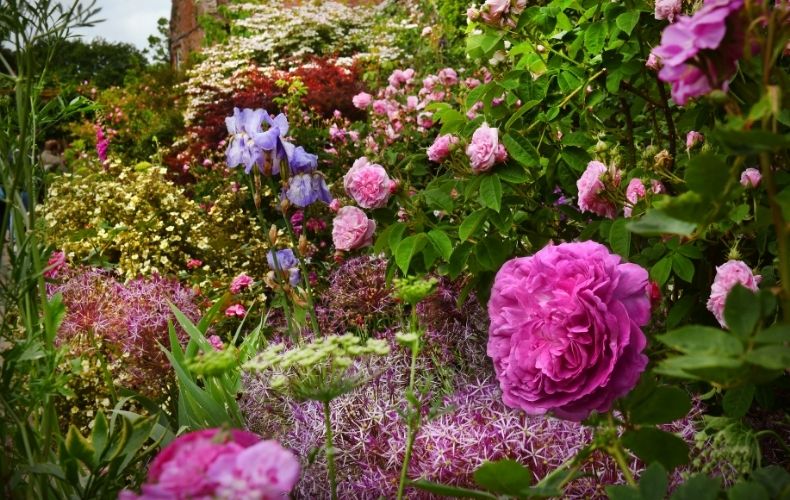 The Best Plants for June

In June the garden bursts into an extravagance of flowers and it’s almost impossible to choose amongst them, but here are five of my perennial favourites.

Surrounded by the devastating aftermath of the Second World War, a Japanese botanist called Dr Toichi Itoh refused to be defeated. In 1948, after thousands of failed attempts, he finally achieved what was thought to be impossible: a cross between a tree peony and a herbaceous peony. Sadly, Dr Itoh died before he saw his miraculous seedlings flower, but he handed down a precious legacy to other horticulturists who went on to develop the spectacular peonies named after him.

Itoh peonies, (otherwise known as Intersectional hybrids) combine the best qualities of tree peonies and herbaceous peonies. Like herbaceous peonies, they form dense mounds of large and deeply divided foliage but beneath this lush canopy is a sturdy armature of woody branches which effortlessly hold onto their heavy flowers without any need for staking. The plants are generous in bud, producing enormous, deeply bowl-shaped, mostly semi-double flowers. Not only do they have the widest colour range amongst peonies, but they are often deliciously scented. Flowering from late June, plants bloom for much longer than other peonies, continuing for up to 4 weeks, with each sterile bloom lasting for up to 5 days. Itoh peonies are also much less susceptible to slug damage and highly resistant to peony blight.

This combination does come at a price. Itoh peonies are expensive because producing them is a difficult and lengthy process, but they represent a truly worthwhile investment. Long-lived and low-maintenance, not requiring staking, fertilising or division – they will thrive in any moist but well-drained soil in a position in full sun. In late winter, simply prune them back to a few centimetres above the ground, cutting down to any visible buds.

Peony ‘Pastel Splendour’ has the looks of a gigantic oriental poppy, its semi-double flowers studded with a central ball of creamy stamens. In common with many other Itoh peonies, the flower change colour as they mature – opening a pink-flushed cream with deep raspberry blotches then morphing through deeper pink and apricot. Simply stunning! Height and Spread: Up to 90cm (35.4”).

Over the past decade salvias have become extremely fashionable plants and tender varieties which were once rarely seen are now widely grown. Their popularity has coincided with an increasingly drier climate and once established they are invaluable for their ability to stand up against summer droughts. Their popularity has spawned a wave of new cultivars, and ‘Moulin Rouge’ is one of the best new hardy pink varieties, distinguished by the especially large size of its individual rosy flowers which buzz with bees all summer.  Height : 60cm (24”). Spread: 56cm (22”).

Phlox paint bold blocks of colour in a border like no other perennial, their domed panicles forming soft duvets of pinks and violets, providing a dreamy backdrop to other more structural perennials. Their other asset is fragrance – billowing clouds of sweet perfume which float across the summer garden. ‘Bright Eyes’ forms gorgeous drifts of pink in the middle and back of borders, each flower picked out with a darker pink eye.  Like other phlox, it prefers a moist, fertile soil, in full sun or partial shade – the flowers lasting longer if given some shade. Height: 80cm (31″). Spread: 60cm (24″).

‘Beauty of Livermere’ was the first flower to entrance me as a child in my mum’s garden and it continues to do so. I love watching the plump, hairy buds just breaking to give a tantalising glimpse of their creped crimson petals before bursting open into a dramatic design of silky scarlet with ebony blotches. Plant them in freely draining soil in full sun in the middle of the border. After flowering the foliage dies back and the plant goes summer dormant, an adaptation which enables them to cope with summer droughts in their native Central Asia. At this point, cut all the foliage down to the ground and allow the surrounding perennials to grow up around them – for this reason never plant them in the foreground of a border as they will leave an unsightly hole after flowering. Height: 90cm (35″). Spread: 60cm (24″).

For sheer versatility, you can’t beat hardy geraniums and there is one for every situation – from low ground cover in dry shady spots to the back of sunny borders. Their ability to thread through other plants creates that much sought-after tapestry effect which is a signature of the most successful flower borders. Most varieties have single flowers but ‘Plenum Violaceum’ is striking for its exquisite rosettes of rich violet blooms which resemble miniature roses held above a mound of finely divided leaves. Height: 60cm (24″). Spread: 45cm (18″).

Choosing the right plants for growing around patios

GPOD on the Road: Earthwise Garden