The Best Hedges for Chalky Soil 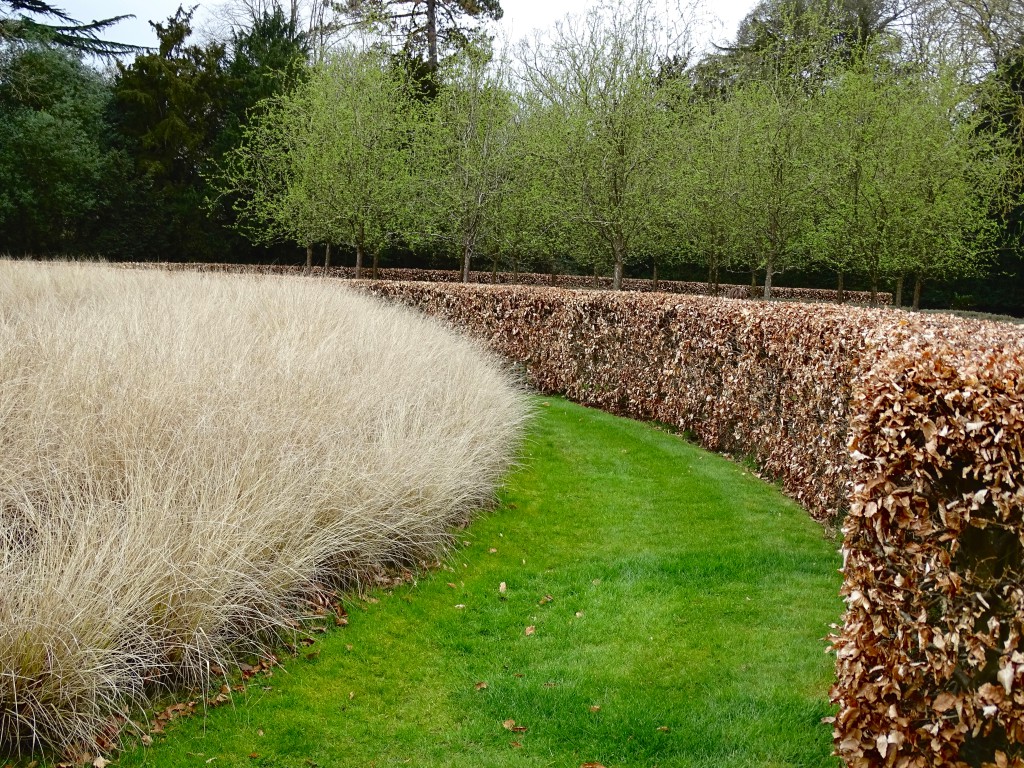 Chalky soils can be challenging. But, with the correct soil preparation and care, there are a host of suitable hedging plants which will happily cope with these challenges. Here is an introduction to some of the best, plus an A-Z list of other species to choose from.

Chalky soils tend to be shallow, deficient in minerals and prone to summer drought. In these conditions plants may exhibit weak growth and develop ‘chlorosis’ – this is when leaves become yellow or pale due to nutrient deficiencies. They may also suffer from water stress. If the top soil is very thin, with a hard chalk layer inhibiting root growth, these problems will be worsened by a small, shallow root ball.

When planting on chalky soil, thoroughly prepare and improve the ground by taking the following steps:

Undoubtedly my favourite hedging plant is the Common Beech, a species which grows extremely happily on chalk. Despite being a deciduous species, when grown as a hedge it makes an excellent alternative to evergreen hedging providing all year-round screening and interest. This is due to a phenomenon called ‘marcescence,’ which means that it holds on to its foliage throughout the winter. The sight of its orange-brown foliage in the winter sun is one of the glories of the winter garden. In spring, the new leaves emerge early in May and are a fresh, bright green providing a classic backdrop to all styles of planting and architecture. Beech hedges grow happily in full sun and freely draining sites but are unsuited to wet or heavy soils in shade.

Cotoneaster is a hugely diverse genus ranging from ground-hugging shrubs to specimen trees and there is a place for one in every garden. Many make excellent hedging species with multiple ornamental qualities. From mid spring to late summer, they produce white to pinkish flowers borne from the previous year’s growth. These flowers are packed with nectar and much loved by bees. The flowers give way to fruits, which are often prolific and come in a variety of colours. Cotoneasters thrive in well-drained soils and have a particularly liking for chalk and limestone, coping well with poor, shallow soils. They are some of the most wind-hardy shrubs and are perfect for exposed gardens or coastal areas where they will comfortably cope with salt laden winds. They are also tolerant of atmospheric pollution, making them invaluable hedging plants for urban gardens to block out traffic noise and emissions. All of them are tolerant of pruning and easily maintained as hedges.

Cotoneaster franchetii makes an evergreen to semi-evergreen hedge with small grey-green leaves which are white beneath. Although it may lose some of its leaves in cold winters, this is a natural response and in spring new leaves will readily replace them. This cotoneaster bears slender arching branches which in early summer become clothed in clusters of pinkish-white flowers. Generous bunches of bright orange-red berries are produced from October to November providing a valuable food source for birds. Tolerant of sea winds and excellent for coastal gardens.

This deciduous Cotoneaster offers the benefit of fiery autumn colour turning through shades of yellow, deep pink and red. The small, shiny green leaves create a dense wall of foliage during the growing season and are followed by black fruits.

You can’t go wrong with a Euonymus hedge and there are so many varieties to choose from. The tough, low maintenance, evergreen varieties are infinitely adaptable, but happiest in freely draining soils including chalky ones.

Euonymus japonicus will grow into a large hedge of up to 4metres if allowed and has bright, glossy, plain green leaves. If you like the plain green but don’t need the height, ‘Green Spire’ and ‘Green Rocket’ make compact, medium hedges of around 1m tall. Their dense foliage is a good alternative to box and can be shaped into topiary balls.

Other Japonicus cultivars offer beautifully variegated leaves. Subtle cream and green cultivars include ‘Kathy’ and ‘President Gauthier’. There is also the smaller and unusual variety, ‘Himalaya’ which has creamy-white juvenile leaves giving a snowy effect. Himalaya is particularly dwarf, only growing to around a foot (30cm). If you would like to inject a bit more brightness, choose the golden tones of Euonymus japonicus ‘Aureomarginatus’ or ‘Ovatus Aureus’.

Amongst the deciduous Euonymus, Euonymus europaeus is the one to pick for hedging and deserves to be more widely grown.

This native shrub or small tree becomes a blaze of colour in the autumn when the leaves turn a fiery red and are accompanied by pink fruit which open to reveal bright orange seeds. It makes a beautiful native hedge and is a great wildlife plant, providing food sources for moths and other insects.

For an evergreen, coniferous hedge in chalky gardens, you can’t go better than Thuja plicata or Western Red Cedar. Unlike the notorious Leylandii, Western Red Cedar is fast growing without being uncontrollable, and at a growth rate of 40-60cm per year it will quickly reach your chosen height.

Unlike Leylandii, it also doesn’t have the annoying habit of dying back if you try to cut into old wood, meaning that even neglected or overgrown hedges can be re-shaped. The dark green, scale-like leaves are held in sprays and release a pineapple aroma when crushed. This unfussy conifer will cope with sun or shade and quickly forms a wonderfully dense hedge which absorbs noise and traffic pollution as well as providing privacy. The most popular variety is Thuja plicata ‘Atrovirens’ which has a more slender and elegant form than the plain species. It can be kept at a hedge of about 1.5-6m high. If you are looking for a lower hedge for a smaller garden, then Thuja plicata ‘Can Can’ is a suitable semi-dwarf form.

The Best Hedges for Chalky Soil