Soybean Oil is the Devil 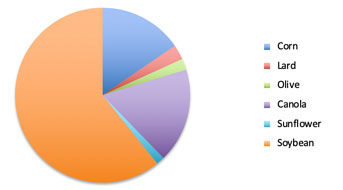 Soybean Oil is the Devil

For your health, that is:

Used for fast food frying, added to packaged foods, and fed to livestock, soybean oil is by far the most widely produced and consumed edible oil in the U.S., according to the U.S. Department of Agriculture. In all likelihood, it is not healthy for humans.

It certainly is not good for mice. The new study, published this month in the journal Endocrinology, compared mice fed three different diets high in fat: soybean oil, soybean oil modified to be low in linoleic acid, and coconut oil.

Soybean oil also makes you a wimp, as I said in a recent interview (which irritated at least one person).

I have no idea what is going on with the water supply or who knows what, but soy is good enough to blame for now.

There are better oils out there.

Stay away from the soy! Make your own mayo, make your own salad dressings, and read all the labels.