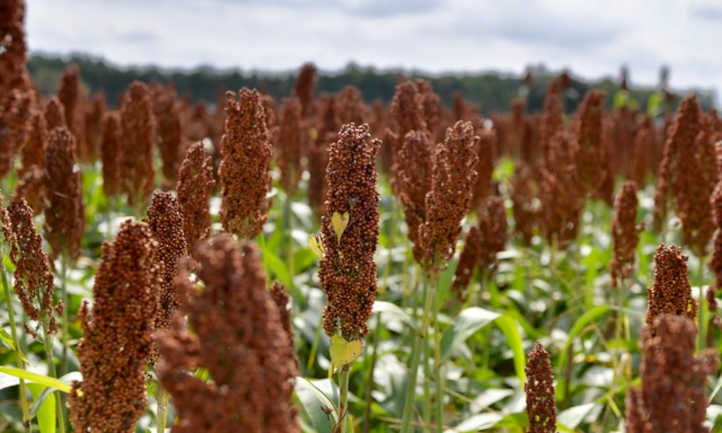 The sorghum plant might be one of the most common and useful cereal crops that many gardeners have never heard of! Believed to be first domesticated in the Niger River Valley of West Africa, this drought-tolerant plant became an important crop for cultures all over Africa, the Middle East, and South Asia.

From its humble origins as an ancient grain, sorghum is now grown commercially for a wide range of uses including livestock feed, sorghum syrup (similar to molasses), weaving material, floral arrangements, and even industrial processes like ethanol production.

Despite its variety of uses and its popularity in other countries, sorghum is not commonly grown in many backyard gardens. With a large number of sorghum varieties available, growing sorghum is a viable option for many home gardeners, especially if they already have experience growing other whole grains.

Sorghum bicolor, commonly known as sorghum, great millet, broom corn, guinea corn, milo, among many others, is one of the world’s top five cereal crops. Originating in West Africa, sorghum spread throughout Africa to the Middle East, and this nutritional crop is now cultivated around the world.

Like other grain crops, sorghum produces large, grassy stalks that end in a seed head. The plant has a similar appearance to corn but unlike corn, the sorghum seeds that we eat form in a cluster at the top of the plant instead of forming an ear.

Planted as a seed, sorghum grows quickly, sending up green fibrous stalks. Once the stalk has reached its mature height of 2-5 feet (depending on the variety grown), tight clusters of yellow, orange, or red flowers form on the ends of the stalks, which are pollinated and turn into the sorghum seed that we eat. Like other grain crops like wheat or barley, sorghum produces tillers, which are offshoots that form from nodes under the soil and increase leads to higher grain yield. Tillering is largely influenced by external factors like plant variety chosen, the growing environment, and management practices.

Culinarily, a sorghum crop can be used in a variety of ways. Seeds are ground into sorghum flour and used to bake flatbreads. Sorghum seeds can also be cooked in a way similar to popcorn to create a healthy and delicious snack. A Tunisian porridge dish called droô is made from sorghum grains, milk, and sugar. In areas of Central America, cooks use sorghum, instead of the usual corn, to make tortillas. Sweet sorghums are a variety that is grown primarily in the United States for syrup production. The resulting syrup, which is similar to molasses, is called sweet sorghum. Areas of southeast Asia and Africa ferment the sorghum grain to produce beer and liquor.

Other than its culinary uses, the sorghum crop is widely used by farmers as the principal feed ingredient in livestock feed. Used for animal feed as either hay or silage, the grain is higher than many other crops in nutrients and protein. After the sorghum seeds have been harvested, the discarded stalks can be turned into a pulp which is formed into wallboard and other construction materials. Also known as broomcorn, broom sorghum is a variety that’s grown to create a traditional style broom. A relatively recent use for sorghum is for ethanol production. Sweet sorghum is harvested for making syrup, which is then fermented and turned into ethanol.

There are many varieties of sorghum that are grown commercially for sorghum production, but the most common for the home gardener are sweet sorghum (also known as cane sorghum), grain sorghum, and broom sorghum.

Sorghum thrives in areas with long, hot summers. The best time to plant sorghum is when the temperatures are consistently warm, with many gardeners waiting until May or early June. It is best grown by being sown directly in the ground. Sow the seeds ¼” deep and 8”–12” apart. Sorghum should be planted in a warm area in full sun and it prefers well-draining soil. As the seedlings germinate, focus on weed control. Young sorghum plants have difficulty competing with weeds.

Although grown primarily in a large area (think other grains like corn, oats, and wheat), a gardener with limited space can certainly grow sorghum in a container. Sorghum plants are self-fertile, unlike corn and many other grains, which are wind-pollinated, you only need one plant to produce seeds.

Sorghum grows quickly and its care is more about setting it up for success in the first place. It grows quickly once established and requires minimal maintenance.

Sun and heat are two of the most important aspects of growing sorghum. Aim for a location in full sun, with 12-14 hours of sunlight at the peak of summer. While sorghum can be grown in USDA zones 2-11, it has higher grain yields when grown in temperatures of at least 80°F, with 90°F being even better. Sorghum can survive light frosts but will die once the main stalk is frozen. Sorghum germinates best with a soil temperature at or above 60°F. When soil temperature starts to fall below 60°F, sorghum will have difficulty germinating consistently.

Sorghum prefers soil that is consistently moist but not soaked. Aim for 3”–4” of water roughly every 10 days. Watering sorghum in the morning helps protect it from the heat of the day. Sorghum will tolerate both drought and overwatering but has a lower grain yield when pushed to either extreme. Watering at the base of the plants works best, using something like a soaker hose or drip irrigation, which avoids the leaves and seed head of the plant getting too wet.

Sorghum prefers a well-draining, slightly acidic soil of 5.5-6.5 pH. Sorghum is relatively tolerant of poor soil, but it needs a high amount of nitrogen, so be sure to amend the soil with compost and a nitrogen-heavy fertilizer. Be wary of weed seeds in the soil and practice good weed control measures, as sorghum doesn’t like to compete for nutrients, especially early in its life cycle.

Being a type of grass, sorghum relies on large amounts of nitrogen to grow quickly. A fertilizer with high nitrogen content like a blood meal or feather meal works well. Even with a healthy topping of compost, aim to fertilize your sorghum with a nitrogen-heavy fertilizer every 6 weeks throughout the growing season. Phosphate and potassium are less important for sorghum growth and the required nutrients should be provided by any healthy soil.

Other than the harvesting period, sorghum does not require any specific pruning or training. After harvesting the grain sorghum produces, the plants will occasionally produce a second crop under the right conditions, but most gardeners prune the stalks back and use them in the compost bin.

Sorghum is propagated only by seed. Refer to the planting section above for information on planting! If left on the stalk, sorghum seeds will readily self-seed.

Harvesting sorghum is straightforward and simple but the techniques differ based on whether you’re growing sweet sorghum (aka cane sorghum), grain sorghum, or broom sorghum.

If you’re growing sweet sorghum to produce sorghum syrup, cut the stalks down at the base about two weeks after the “milk” stage. Like corn (and other grains) the milk stage refers to the time when the seeds will produce a milky substance when pressing a fingernail into them. Next, strip the leaves off the stalks and press the canes, which will produce a light green juice that can be cooked down into sorghum syrup.

If you’re growing grain sorghum, the crop needs to be left until the seeds are fully developed. Once the seeds are hard and glossy, they are ready to be harvested. Cut off the top portions of the stalk with the seed heads still attached and leave them in a warm place to dry for at least a week. Once dry, roll the seed heads over a section of hardware cloth or wide sieve to free the seeds.

For broom sorghum, the dried stalks and seed heads can be cut and used to make traditional brooms, floral arrangements, or other crafts.

Processed, dry grain sorghum can be eaten immediately or stored in a cool, dark location inside a tightly sealed container like a jar. Stored this way, it can last several years. If you choose to ground your harvest into flour, it should be stored similarly to other flours; in a closed container out of direct light or heat.

Sorghum syrup can be stored like honey, in a closed container within a cupboard. Try to avoid any temperature extremes and it will last for many months. If the syrup crystallizes, gently heat the jar in a pot of warm water.

If grown in favorable conditions, sorghum is a very hardy crop that doesn’t face too many issues. There are, however, a series of pests and diseases that can affect a sorghum crop.

The most common growing problems that affect sorghum stem from improper planting conditions. Too little sun and low temperatures will produce a lower crop yield. While sorghum is quite drought-tolerant, too much or too little water will also stunt growth.

Luckily, most pests that affect sorghum are fairly easy to deal with. Two major pests are rodents and birds; they both enjoy snacking on the tasty seed heads. Dealing with these comes down to timing and cover. Once the seed heads start to form, consider covering your crop with a floating row cover or bird netting. Time your harvest so the dry seeds aren’t left out in the garden for too long.

Aphids, caterpillars, and sorghum midge are more difficult to tackle. Aphids can be removed easily with hard sprays of water from a hose or by planting trap crops like nasturtium or marigolds nearby. Caterpillars and sorghum midge can quickly destroy crops and should be aggressively treated. Neem oil sprays work well for many gardeners, but if you have a heavy infestation (especially with sorghum midge) consider pulling out stronger insecticides. Repeat the application of neem oil or insecticidal spray every 3 to 5 days after initial treatment until the issue is relieved. Bacillus thuringiensis spray can also aid in the control of many caterpillar species.

Sorghum leaf blight, bacterial leaf spot, head smut, downy mildew, and anthracnose are all caused by varieties of fungi. They primarily affect the leaves and can result in stunted growth or death. In this case, the best defense is preventative care. Selecting disease-resistant cultivars and planting in well-draining soil with plenty of sun helps keep fungi levels low. If that doesn’t work, a fungicide like organic copper fungicide or neem oil should be applied.

Sorghum ergot is also caused by fungal buildup, but can not be easily treated by the methods mentioned above. Ergot primarily affects the pollinating florets of the plants and is difficult to control. There are currently no available varieties of sorghum that are resistant to ergot and treatment involves heavy applications of strong fungicides, which are usually only available to farmers in large scale quantities.

Maize dwarf mosaic virus (MDMV) and Sugarcane mosaic virus (SMV) are both viruses carried by aphids. Genetic resistance and control of aphid populations is the best way to prevent these diseases. Once afflicted with the virus, it’s best to destroy the plant.

As with most crops, crop rotation can play an important role in avoiding these pest issues. Fungal spores and disease-carrying pests often overwinter in the ground, so rotating crops can be one of the best ways to prevent pest issues in the first place.

A: Yes! The seeds are the most commonly eaten part but syrup production is also a common use for sorghum.

Q: What is sorghum called in India?

Q: Is sorghum easy to grow?

A: Sorghum is relatively easy to grow and is already widely cultivated by farmers around the world!