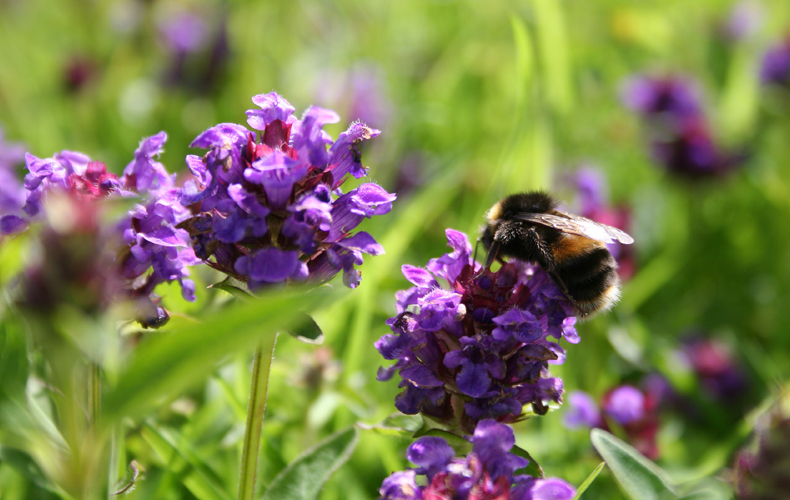 This white tailed bumble bee is enjoying selfheal flowers which have spontaneously popped up in an unmown lawn
Image: Plantlife

Which would you choose? A barren desert wasteland? Or a tapestry of wild flowers teaming with insects, mammals and birds?

Lawns are great for leisure and as a foil to colourful planting, but they are also wildlife wastelands. Just 1% of our countryside is species-rich grassland but Plantlife suggests that ‘with 15 million gardens in Britain, our lawns have the potential to become major sources of nectar’, helping to reverse alarming declines in our insect populations and support a host of other wildlife.

You don’t have to lose the lawn completely, but here are three ways to allow some wildness into your lawn, starting with the easiest.

1. Make a Small Change to your Mowing Regime

Common species such as dandelions and daisies will cope with some mowing. According to Plantlife, “just 8 dandelion flowers might produce enough nectar sugar to meet an adult bumblebee’s baseline energy needs.”
Image: Plantlife

The lawn under your feet has the potential to be a biodiversity hotspot and you only need to do one thing: nothing! You don’t have to stop mowing completely, but try to mix your mowing regime up a bit by following some of the following suggestions:

Data from Plantlife’s surveys has shown that a mix of short and long grass is ideal. The shorter grass allows plants like daisy, white clover and bird’s-foot trefoil to flower, which can boost nectar production tenfold. Longer grass supports a wider range of plant species, allowing taller plants like oxeye daisies, field scabious and red clover to grow up and bloom. The taller grass also provides food, shelter and nesting habitats for insects.

Allowing some of your grass to grow long doesn’t mean giving up on design. In fact, the contrasting textures of long and short grass can be used to great effect in garden design, with mown areas creating paths, defining areas or carving out shapes
Image: JoeGough, Canva

You never know what exciting species might turn up in your lawn! In 2021 people who took part in No Mow May reported over 250 plant species including rarities such as meadow saxifrage, snake’s-head fritillaries, and wild orchids.
Image: Plantlife

Every Flower Counts is a citizen science survey organised by Plantlife. The survey aims to provide a snap-shot of which flowers are most abundant on our lawns and how much nectar they are producing. There’s still time to take part – the next survey is from 9 to 17 July. It doesn’t matter whether you’ve mown your lawn or not – Plantlife are keen to know how mowing affects flowering and nectar production, so your results will provide valuable data.

2. Introduce some wildflower plugs into your lawn

By planting wildflower plugs you can increase the wildflower species in your lawn and enjoy showier beauties such as these perennial ox-eye daisies
Image: Plantlife

Once you’ve relaxed your mowing regime, go one step further and introduce some wildflower plugs into your lawn. Plugs can be purchased, or you can sow your own:

Lawns contain vigorous grasses which compete with wildflower species for moisture, nutrients and light. Tackling this by removing turf and nutrient-rich topsoil is backbreaking work, but a clever and unusual looking plant called yellow rattle can help to do the job for you.

Yellow rattle is an annual wildflower which parasitises grasses, feeding off the nutrients in their roots and weakening them. This allows wildflowers and finer grasses to thrive.

Sowing your own yellow rattle can be tricky, because, for good germination, you need to get hold of fresh seed. However, I’ve had success with yellow rattle plugs which can be ordered now ready for spring planting. Plant these out as described above and avoid mowing until mid-July/August. By this time, the dried seed pods will rattle when shaken, scattering seed over the lawn to establish spreading colonies the following year.

This is the most labour-intensive method of re-wilding your lawn but will establish a wide diversity of species within one season. Whilst it may not be an option for the whole of your lawn, why not try it for just a section?

Where?
Choose an open, sunny area which is free of pernicious weeds such as nettle and thistles and preferably a site with nutrient-poor soil. Rich soil will promote the growth of vigorous weeds and grasses which will outcompete the wildflowers.
When?
The best time is August – September. Alternatively, March-April.
What?
For a perennial meadow which comes up year after year with little maintenance, the seed mix should include mostly perennial (not annual) wildflowers, plus some fine meadow grasses.
Choose a mixture which is suited to your soil type and your locality. It’s a good idea to get out into nearby countryside and familiarise yourself with the wildflowers growing in your area.
How?

“Because many insects need little space to survive, even partial conversion of lawns to minimally disturbed natural vegetation—say 10%—could significantly aid insect conservation”

Wilding up even a small part of your lawn can lead to exciting results, and it doesn’t need to be hard work. I made my own mini-meadow by reducing mowing and planting in wildflower plugs. It has been fascinating to see what has popped up in the lawn – selfheal, hawkbits and scarlet pimpernel have all arrived spontaneously. My mini-meadow is a little wildlife haven: bumblebees heavy with pollen forage on the knapweed, damselflies rest delicately on tall grass blades, froglets hide in the cool damp shelter whilst twittering goldfinches feast off seeds.

Since the 1930s, we have lost nearly 7.5 million acres of flower-rich meadows, but as gardeners, we can make a significant contribution to reversing this loss of habitat. So go on! Unlock the potential of your lawn and let a little wildness in.