Naturalistic planting design – how to get it right in your garden 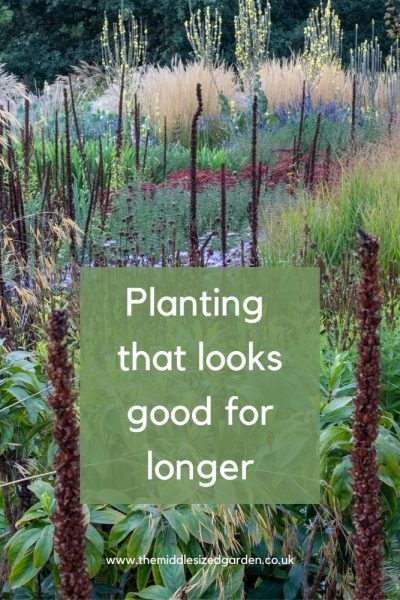 Naturalistic planting design – how to get it right in your garden

Naturalistic planting design is based on choosing plants that grow well in your area, then repeating them to create a natural rhythm.

And borders are based on structure and texture, rather than colour, so the garden will look good for months on end, including during the winter.

Michael McCoy is one of the world’s top experts in naturalistic garden design and his work has been featured in books, magazines and TV internationally. He’s also the host of the ABC TV series Dream Gardens. He leads Travelling Masterclass garden tours and has an informative and delightful blog called The Gardenist. 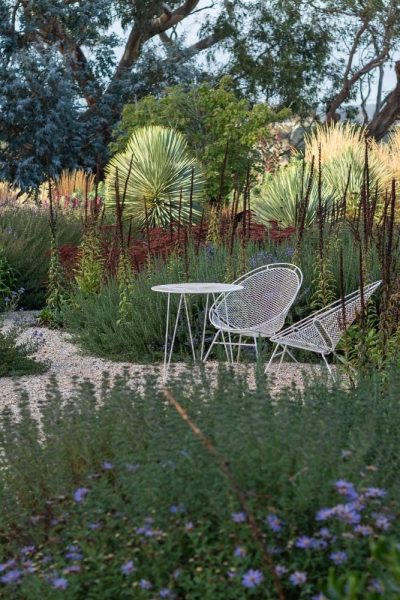 Naturalistic planting in one of Michael McCoy’s clients’ gardens.

So I caught up with him in his own garden and in a garden he created for a client. He has some very interesting tips for making the look work in a small or middlesized garden.

The client’s garden is in a stunning setting and is attached to a newly built modern house. The house has an amazing view. Michael advised them that it would be difficult for any planting to compete with a view.

So the naturalistic borders are just a short walk from the house, surrounded by lawn and countryside. They’re in a contained garden area, around 100ft/30m in diameter, which shows that this look can work in smaller areas as well as huge public gardens.

How naturalistic planting is different

Naturalistic planting relies on the contrast in plant shapes and textures, rather than on colour. It takes away the need to have lots of plants in flower at once.

Most of the plants are perennials or ornamental grasses. It’s a look that’s been made famous by the High Line in New York and the Olympic Park in London.

‘It’s very different from the planting I experienced at Great Dixter thirty years ago,’ says Michael. ‘Christopher Lloyd created borders (such as the Long Border) where everything was dancing at once, at a peak of perfection. Then he extended the season as long as possible on either side, but he never compromised the timing of that peak.’

In contrast, naturalistic planting evolves rather than peaks. Naturalistic garden designer Nigel Dunnett believes you only need to have three types of plants in flower at any one time in your garden. Texture and contrast do the work, which means the interest goes on for longer. 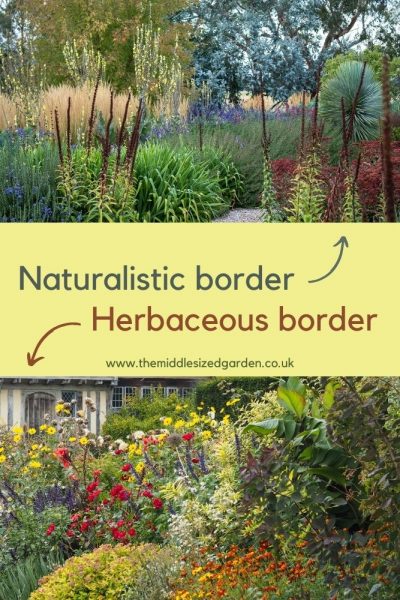 The top photo shows naturalistic planting at one of Michael McCoy’s clients. The different plant shapes and foliage colours have a major impact. There are three varieties of plants in flower. The picture below is of the famously gorgeous Long Border at Great Dixter. There’s much more flower colour – about 6 different flowers can be seen blooming here, although it’s of a smaller area. Both are beautiful – it’s just a different approach.

Michael says that he sees borders with only one type of plant in flower at any one time. They still look good because the flower is repeated. I saw this work in his own garden, where colchicums were the only flowers I saw in one area, yet the area seemed to vibrate with colour.

Many of the flowers are also chosen because they have good seed heads. That make it a very low maintenance look because there’s little or no deadheading.

The plants are planted densely to minimise weeding. And many of them only need a good cut back once a year, then a layer of mulch.  So once planted, there’s less to do.

‘I think in terms of triplets of plants,’ says Michael. He advises you to think about three main plant shapes when planning naturalistic planting.

The first plant shape is vertical or vase-shaped. For example, Verbascum splendidum and Stipa gigantea in this garden have an upright and a vase shape respectively. There are also tall, thin spires of foxgloves (Digitalis ferruginea), both as flowers in early season and as seed heads later on. 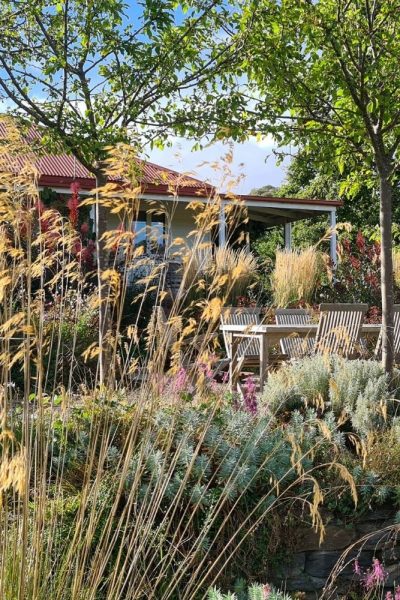 Choose an upright shape, such as this vase shaped Stipa gigantea, in Michael’s own garden.

Then the second shape should create a horizontal element. You can see this here in this garden with the way Aster frikartii ‘Monch’ creates a spread of small blue flowers at one level. It’s so densely planted, it almost looks like a river. 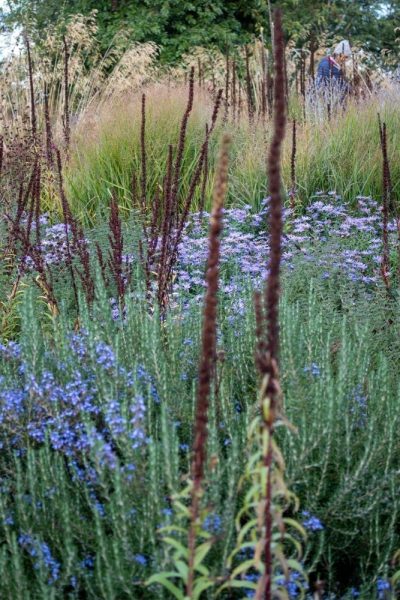 Three elements in a naturalistic planting: Here there is an upright shape – the seed heads of Digitalis ferruginea, a local foxglove. There is also a horizontal planting, with Aster frikartii Monch and you can also see soft mounds of Panicum virgatum as well.

The third plant shape is ’rounded.’ In this garden, there are mounds of Miscanthus transmorrisonensis. 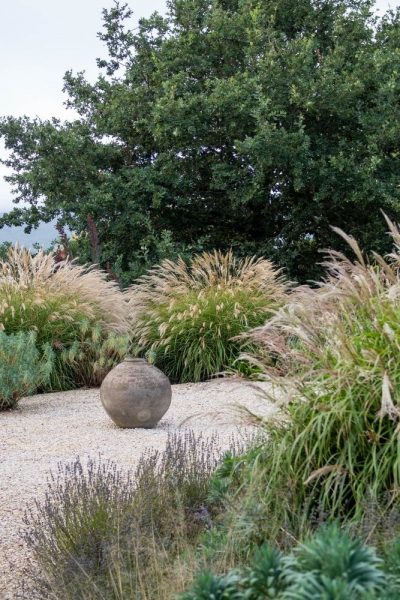 Softly rounded mounds of Miscanthus transmorrisonensis surround a pot. The use of repetition is so simple – but so effective.

Use a very limited palette of plants in a smaller garden

The garden featured here is an approximate oval and is about 100ft/30m in diameter. So it’s not a huge space. Michael has created this effect by using a surprisingly small palette of plants, repeated around the garden.

And if your garden is smaller than this, he’d suggest using even fewer varieties of plants. ‘Think about having one upright shape, one rounded and one horizontal,’ he says. The important thing is to create pattern through repetition. 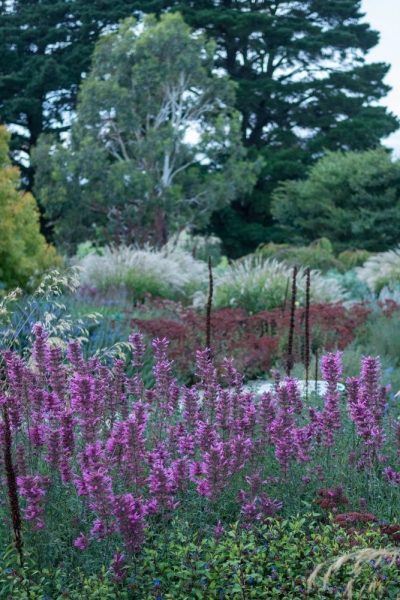 Swathes of planting give a lavish, textured feel- but Michael has used surprisingly few plants, repeating them all over the naturalistic planting borders. They are all easy to grow and many are indigenous to the area. In the foreground is Agastache ‘Nadine’, the deeper red is Hylotelephium ‘Autumn Joy’ and the grasses are Miscanthus transmorrisonensis.

If your planting space is very small, Michael advises you to cut back the number of varieties of plants you use. Pick your one upright plant, your one rounded plant and one horizontal plant and repeat these through the space. ‘You need enough repetition for it to be interesting,’ he says. ‘Although you can’t fix a percentage on that, because it depends on the size of your plant.’

But hard landscaping is less important

This look doesn’t depend on hard landscaping. Go for softly winding paths and seating areas that feel like a clearing in the planting. You could use gravel, mulch or even grass paths. The planting fills the space, so you don’t need lawns. 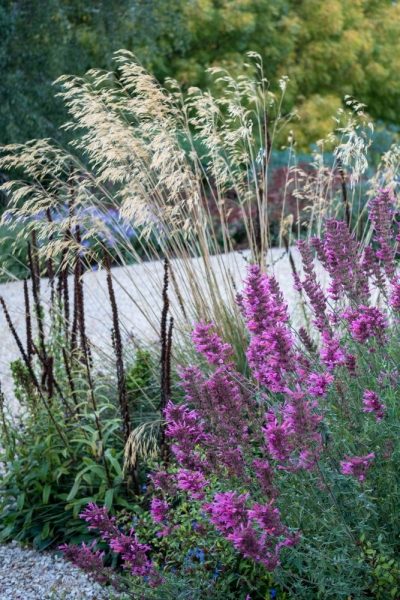 There’s no lawn or hard landscaping in this ‘naturalistic garden’ – just winding paths and slightly larger areas where there may be a chair and tables or a single pot.

Plant densely in a naturalistic planting

Michael advises you to plant as many plants as you can afford in a naturalistic planting scheme.

You’re usually advised to plant groups of threes, fives and sevens in a traditional herbaceous border. In naturalistic garden design, you could double or treble this.

Tips on planting ornamental grasses in your garden

Many people say they don’t like ornamental grasses. I think that may be because they can be hard to combine with traditional planting. So I asked Michael for his tips.

‘For example, Stipa gigantea has flowers/seed heads at around 1.8m. But if you put that alongside another plant 1.8m high, then you’ll lose the effect. What you want to see is the whole arching of the stems.’

Stipa gigantea’s foliage is around 800mm so you need to plant plants of that height around it. 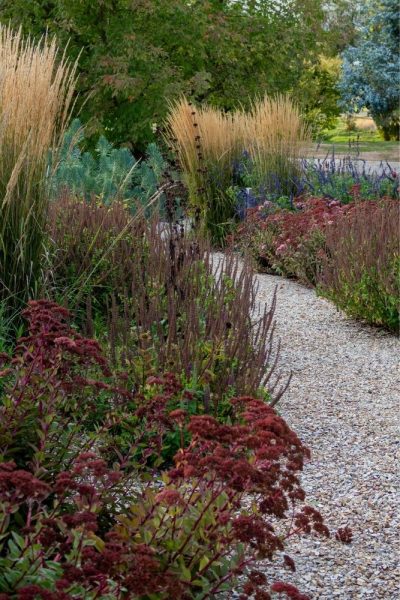 Here you can see the flowers/seedheads of Calamagrostis ‘Karl Foerster’ are higher than the plants around, which are the height of the Calamagrostis foliage.

It’s also important to consider which grasses look better planted as individuals and which ones work best as a clump. Stipa gigantea needs some space around it to show off its vase-shaped stems. But Calamagrostis ‘Karl Foerster’ is very upright, so it looks good in groups.

And in contrast to other plants, Michael says that deciduous grasses are easier than evergreen ones. Deciduous grasses die off in the winter, but they hold their shape. Then in spring, you just cut them completely to the ground and they spring up from new.

However, evergreen grasses need to be combed out, which is more fiddly. They often won’t come back as well if you cut them to the ground.

Michael recommends that you plant around 20-30% of a perennial border with ornamental grasses to get the right balance for a naturalistic planting. That’s because you need some repetition for it to look as if they’re part of the ‘native language of the planting’. But more than 40% would be too much.

Only use plants that look good before, during and after flowering!

Piet Oudolf says that ‘a good plant has to look good when it’s dead’, according to Michael. There’s real value in thinking what a plant looks like outside of its flowering period, and especially what it looks like in winter. 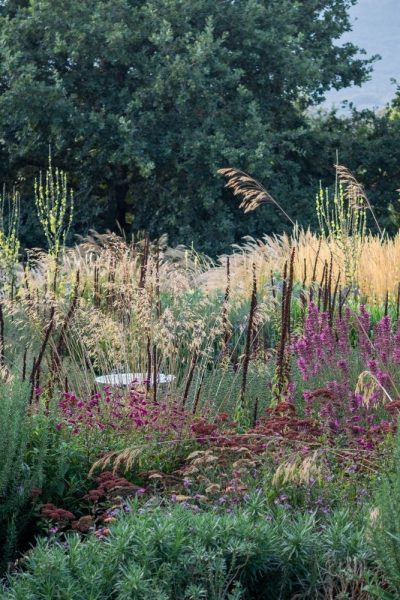 The spires of the local foxglove, Digitalis ferruginea, look good when they are in flower and also when they are dried seedheads as in this picture.

It’s also important to think about how the flowers are presented. Think about whether you can plant them so they create a dense river of flower colour. Or are they lighter and more airy? Think about that contrast in the same way a flower arranger would contrast a light gypsophilia against a more solid lily, advises Michael. 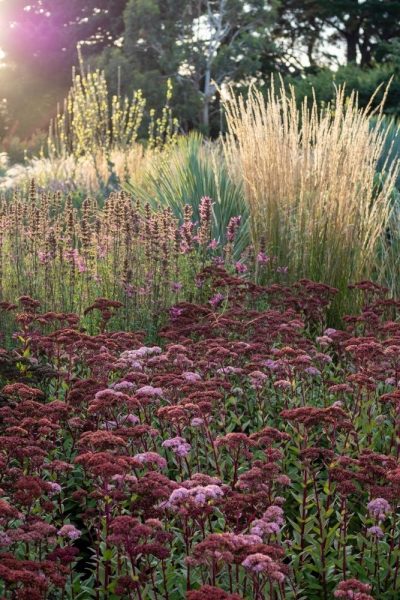 The flowers of this Sedum (now Hylotelephium) Matrona create a rich density of flower colour.

Both traditional herbaceous borders and naturalistic planting rely on perennial plants. So I asked perennials expert Rosy Hardy of Hardy’s Cottage Garden Plants to explain the basics of choosing and growing perennials here.

And Steve Edney and Lou Dowle’s 100 metre perennial border combines elements of both traditional and naturalistic planting. Find out what you need to know to create an outstanding perennial border here. have created it as part of their No Name Nursery.

Find out more about naturalistic planting

This garden designed by Michael McCoy is one of 40 naturalistic gardens around the world featured in Wild, The Naturalistic Garden by Noel Kingsbury, with photography by Claire Takacs. It’s been described as ‘the first comprehensive overview’ of the naturalistic planting design movement. It really gives an idea of the range of styles and situations that suit this sustainable and wildlife-friendly way of planting.

One of my favourite books on the subject is Planting, A New Perspective by Piet Oudolf and Noel Kingsbury. It’s a very detailed and highly knowledgeable, covering grouping and combining plants and long-term plant performance. There are planting plans and a closer look at issues such as the architecture of perennial plants.

Note that links to Amazon are affiliate, see disclosure.

See more of the naturalistic planting on video

There are wider views of the garden and the planting, with Michael’s tips, in this video. 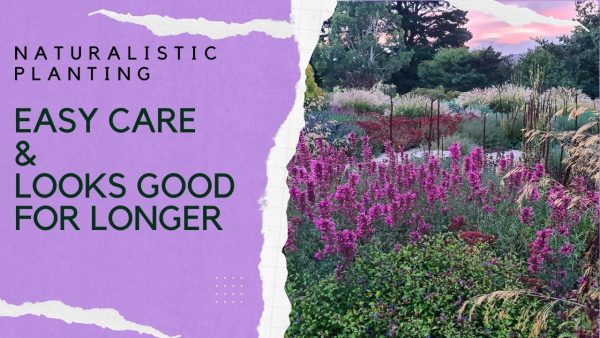 And do join us for a free weekly email with more tips, ideas and inspiration for your garden.