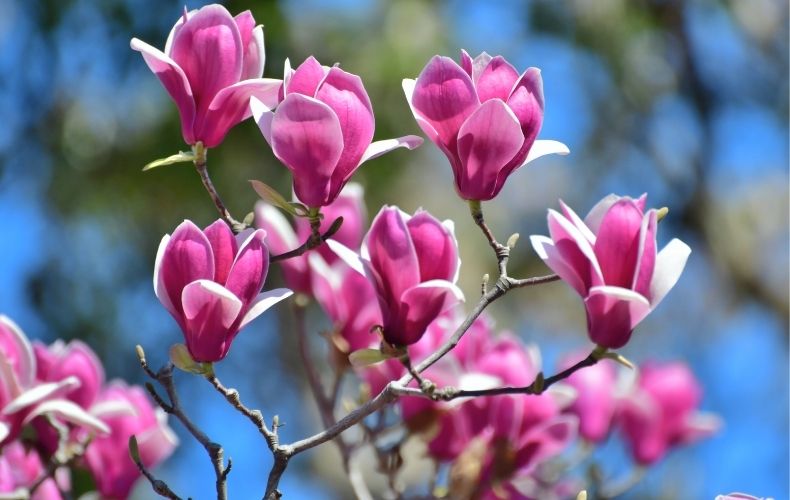 Get out into gardens now and enjoy the spring performance of magnolias in full bloom
Image: magicflute002/Canva

Cossetted within their velveteen coats, the buds of magnolia trees are just beginning to unfurl their voluptuous, vase-like blooms and wow crowds with a spectacular spring performance. If you’ve ever gasped in awe at a magnolia in full bloom but dismissed them as too difficult to grow yourself, then think again. Modern cultivars are increasingly versatile and reliable, with many being suitable for smaller gardens and even container growing.

Dinosaurs tramping amongst dull ferns and horsetails were probably the very first creatures to appreciate the beauty of magnolias!

Magnolias are a very ancient genus and botanists believe that the very first flowers to evolve on earth were similar in appearance to the magnolias we see today. These first flowers evolved before winged insects and were pollinated by beetles which were attracted to the flowers by their fragrance, edible petals and pollen. Millions of years later modern magnolias still have deliciously fragrant flowers, with scents of lemon, honey and vanilla. Not only beetles enjoy their edible flowers but also humans – the buds are valued in Asian cuisines for their unusual perfumed, gingery flavour.

The Ice Age swept away the European magnolias leaving them stranded in the Americas and Asia. In South America, magnolias have been appreciated as garden plants since the Aztec Civilisation, when the creation of pleasure gardens was a popular pastime for the nobility. Now teetering on the edge of extinction, Magnolia dealbata was cultivated by Aztec gardeners who valued the tree not only for its beauty, but also its medicinal uses. Scratch the bark of a magnolia and you will discover that it has a lovely balsamy smell, an indication of the complex compounds which have been used in traditional medicine for thousands of years.

It wasn’t until the 17th century that the first magnolias were introduced into Europe from eastern North America. All of the American species are later flowering, and include Magnolia grandiflora; an impressive evergreen species with huge, cupped flowers.

Magnolia grandiflora was one of the first magnolias to be introduced to Europe
Image: Rixie/Canva

At the beginning of the 20th century magnolias became even more exciting. Two intrepid plant hunters, Ernest Wilson and George Forrest, returned from China with a magnificent cache of Asian magnolias. After these species were brought back to Britain, breeders began creating wonderful hybrids such as Magnolia x soulangeana, which is now one of the most popular magnolias in UK gardens.

Don’t be put off by huge specimen magnolias, there are plenty of varieties for small gardens
Image: Magnolia campbellii, susipangrib/Canva

There are numerous myths surrounding the cultivation of magnolias which deter people from growing them. They have an undeserved reputation for being difficult, only growing on acid soils in very warm locations and taking decades to flower before reaching huge proportions which can’t be tamed by pruning. As a result, they have become associated with large country gardens in southerly locations where towering specimen trees of Magnolia campbellii flaunt their blooms dangerously early in late winter, thoroughly intimidating ordinary gardeners in charge of small plots in cooler climates. Let’s challenge some of these magnolia myths and make a place for these sublime shrubs in even the humblest gardens!

Magnolias aren’t too big for your garden

You don’t need to own a country house to grow a magnolia! There are plenty of options for small gardens and even container growing.

Magnolia stellata is the perfect candidate. Forming multi-stemmed shrubs, they are easily accommodated in small gardens and patio containers. Their open, starry flowers with gently drooping petals come in pink or white. They look gorgeous dappled with spring sunshine.

For small magnolias with the more classic, goblet-shaped blooms, both Magnolia ‘Satisfaction’ and ‘George Henry Kern’ are rewarding choices, providing delicately pink-flushed flowers which contrast with a paler inside.

Magnolia ‘Susan’ also possesses the typical upright flowers, but the form is slender and vase-like with the petals artfully twisted. ‘Susan’ is an RHS award-winner and it’s impossible not to fall in love with the deep purplish pink of her flowers.

But if you are one of those people who falls deeply for darker tones, then the slender, lily-shaped flowers of Magnolia liliflora ‘Nigra’ will have you swooning whilst Magnolia ‘Genie’ flaunts the same romantic colours but in a more voluptuous silhouette.

All these choices are excellent for pots. Growing magnolias in containers allows you to position them close to a window where you can appreciate their spring flowers indoors. Containerised magnolias can also be used as the focus of a stunning spring patio display surrounded by pots of early-flowering bulbs such as crocus and daffodils.

Whilst many magnolias do need acid conditions, there are worthy choices for those of us who garden on neutral or alkaline sites, providing the soil is moist and you prepare your planting hole with care, enriching the planting mix with some organic matter.

Living on the South Downs, I am surrounded by gardens with wonderful specimens of Magnolia x soulangeana which are happily thriving on shallow chalk. An RHS award winner, Magnolia x soulangeana slowly grows into a broad tree with a domed crown and elegantly spreading branches which carry masses of flowers in spring. The large blooms are carried with great poise, like goblets held upright to toast the spring, and are available in pink or white. Magnolia x soulangeana defies the reputation which magnolias have for being difficult, as this is a thoroughly unfussy tree.

Other magnolias suited to neutral to alkaline soils are Magnolia grandiflora and Magnolia wilsonii.

If you want to grow one from seed, then yes, you may be waiting for up to 40 years, but established potted plants on grafted rootstocks will reward you with blooms within 3 to 5 years. Some are even faster than that. Magnolia ‘Fairy Cream’ is renowned for its vigorous growth, producing spring blooms on relatively young plants. It’s also usefully petite and an ideal specimen for a small border or container.

Magnolias don’t only flower in the spring

Magnolia grandiflora is often admired in the gardens of large estates where their huge, glossy, evergreen leaves sparkle on the vast sun-baked walls of stately homes. In late summer and early autumn it is decked with large creamy-white flowers with an intoxicating, citrusy fragrance. Fortunately, those clever plant breeders have come up trumps again – with a cultivar for those of us who don’t have a mansion but are lucky enough to have a south or west facing wall in a sheltered position.

Magnolia grandiflora ‘Alta’ makes a fabulous specimen tree. Its narrowly columnar habit means that it’s much more easily accommodated than the species, only spreading to a comfortable 1.5 to 2.5 metres. The handsome, glossy leaves are also slightly narrower than the species but have the same coppery, felted undersides. However, there are no compromises when it comes to flowers, and in late summer Magnolia ‘Alta’ produces luscious, cup-shaped blooms of pristine white.

The plant hunter, Ernest Wilson, gave his name to the rare Magnolia wilsonii which flowers in May and June. This AGM winner has more bashful blooms than the upward-facing flowers of most magnolias. The flowering heads of Magnolia wilsonii nod down shyly, but peer up into them and a prominent central green cone surrounded by crimson stamens is revealed as well as intense perfume. These pristine flowers are nature at its most simple and stylish.

Better still, both Magnolia grandiflora and Magnolia wilsonii don’t demand acid conditions and will happily grow in gardens with neutral to alkaline soils.

Magnolias aren’t all pink or white

For the past 30 years, breeders have been chasing after the elusive yellow magnolia. Only a few disappointing American species have shades of yellow in their unspectacular blooms and these are all late flowerers. But magic tricks by clever growers have eventually turned up alchemist’s gold – transforming these yellow American plain janes into Asian spring beauties with stunning primrose-yellow blooms. Due to their American parentage, both Magnolia x brooklynensis ‘Yellow Bird’ and Magnolia ‘Daphne’ flower slightly later than other spring magnolias in April/May, so the flowers are at much less risk of frost and cold winds and therefore longer lasting.

Magnolias are a seasonal spectacle which is not to be missed. Grasp the opportunity to get out and visit open gardens in March and early April to enjoy these divas. But be inspired not intimidated by them and plant one in your garden this spring. You won’t regret it!