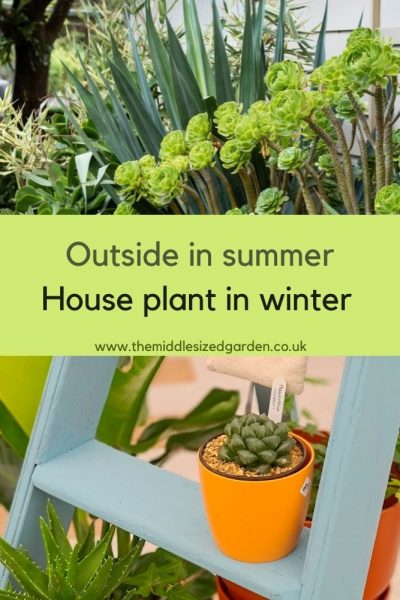 Indoor outdoor plants are plants you can grow in winter as house plants, then move out onto your terrace or garden when the warmer weather comes.

If you don’t have a greenhouse but want to grow plants that won’t survive your winters, then plants you can bring indoors when the weather turns are not just beautiful. They’re also space savers. And in summer, you have an almost ready made display.

‘All plants evolved as outdoor plants,’ explains horticulturalist Stephen Ryan. The ones we can grow inside as indoor plants are generally those which can handle the much lower levels of light inside a house. There is more sunshine in a shady border than there is on a mantelpiece in a room!

So I’ve teamed up with Stephen’s YouTube channel The Horti-Culturalists, which he runs with Matthew Lucas, to give you lists of beautiful indoor outdoor plants and how to look after them inside and out. See their video on peperomia, begonias, monstera, philodendron and more here.

Sunlight isn’t the only factor in keeping indoor plants healthy. For the Middlesized Garden side of the collaboration, I’ve asked Alice and Maddie Bailey from the stunning house plant sellers Forest to explain the house plant side of indoor outdoor plants. 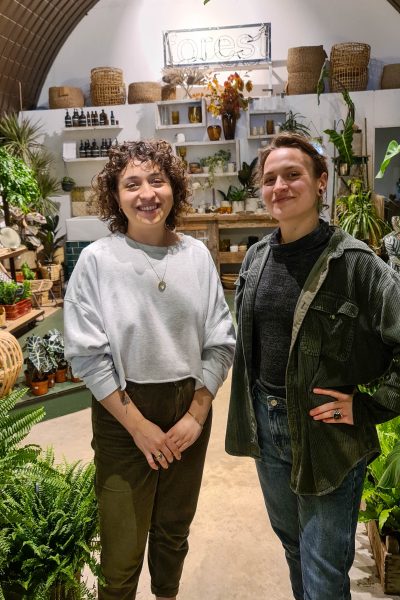 Alice and Maddie Bailey of Forest, the online and London indoor plant store. They’re also the authors of The Green Indoors.

Maddie and Alice are authors of The Green Indoors. This book tells you what the natural environment of your house plant would have been. The more closely you can mimic that environment indoors, the better your plant will grow inside. For example, calatheas grow on damp forest floors in the tropics, so they can tolerate the shade of a room. But they do need that room to be warm! 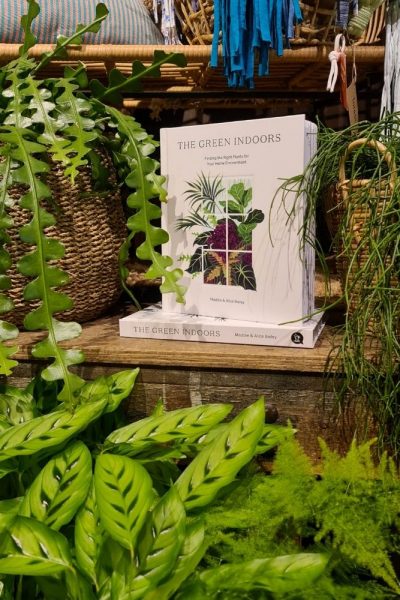 The Green Indoors explains how you can give your house plant exactly the right atmosphere and place for it to thrive.

Can you take any plant indoors and treat it as a house plant?

No. You can grow any plant in a pot, but only a few will be happy indoors. As well as the light levels, Maddie says that ventilation is also a factor. ‘A lot of plants can’t cope with the fact that our homes are quite cooped up, with dry air and radiators.’

I’m often asked if you can grow plants like dahlias or cannas as house plants, but they need too much sun. In winter, you need to bring dahlias, cannas and other tender plants into a frost-free area, such as a shed or garage.

But you can’t take them indoors and treat them as a house plant as they’re going dormant. They won’t flower.

Alocasias need a light, bright spot in the house, says Alice. But they shouldn’t be in direct light (such as on a window sill) as they’re sheltered by the rainforest canopy in their native environment. They also love the humidity of the jungle, so put them in a light bathroom or kitchen, where there’s lots of humidity from cooking or bathing. 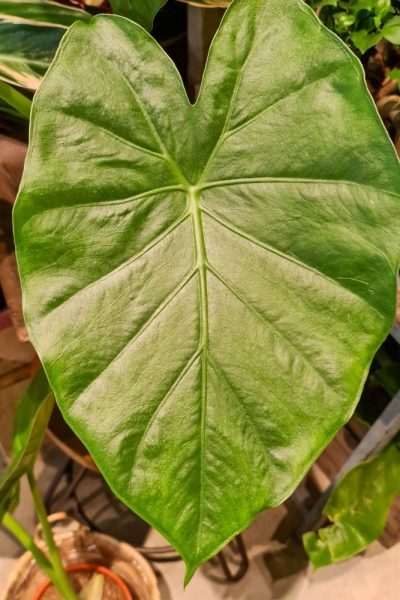 Alocasia (Elephants’ Ear) can cope with temperatures down to around 7C/45F, so you could keep one outside in the UK all summer.

Stephen grows alocasias in his garden, where there are occasional frosts. These nip the leaves, although they grow back in spring. If you have an alocasia in a pot, you should probably bring it indoors before temperatures drop to around 7C/44F.

Although alocasias need quite high light levels inside, Stephen grows it in a partially shaded spot outside, because they don’t like strong sunlight.

The aspidistra is ‘really cast iron’, says Maddie. ‘They’re very low maintenance. They can grow in a very shaded spot and don’t mind a draught. In fact, they’ll tolerate almost any unfavourable conditions.’  The aspidistra fell out of fashion in the mid 20th century, but is now newly appreciated for its elegance and because it’s so easy to care for. 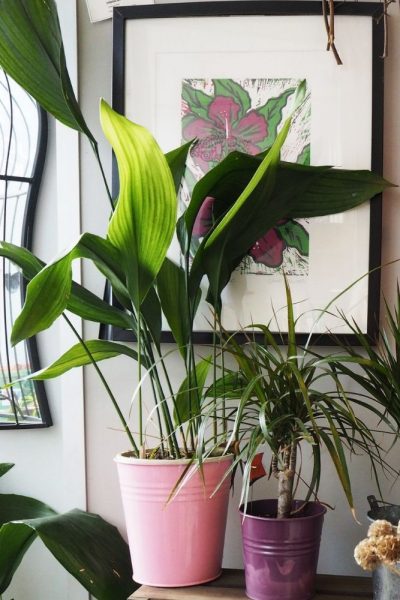 Aspidistra (in the pale pink pot). One of the easiest house plants to grow and very elegant.

If you put your aspidistra outside on the terrace, it can stay out until the temperatures drop below 6C.

‘Shade and dryness are the two things that aspidistras need if they’re planted outside,’ says Stephen.

Philip Oostenbrink, author of The Jungle Garden, has a National Collection of Aspidistras in the UK. Read about his jungle garden philosophy here.

Aeoniums are a desert plant, says Maddie, so they prefer warm, dry air. ‘As long as they’ve got lots of sunlight and minimal amounts of watering, they’re perfectly happy indoors.’ 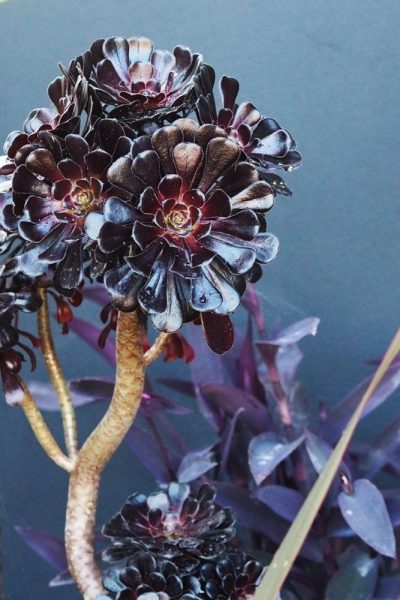 Aeoniums come in a range of colours and sizes. This burgundy one grows outside all year round in a sheltered coastal garden near me, but it’s an area that rarely gets frosts.

Stephen says that aeoniums grow well outside in a ‘cool Mediterranean climate.’ They’re a really easy, unfussy plant but they need sun. Some of the burgundy leafed ones will be more green if they’re planted in the shade.

Stephen has occasional frosts, which the aeoniums survive, but generally it’s best to bring them indoors before temperatures reach 5C/41F.

Begonia Rex and others

There are thousands of begonia varieties, but not many will transfer happily from indoors to outside. Alice recommends Begonia Rex as a good variety which will grow outdoors on a terrace in a temperate summer and still look good indoors in the winter.

If you do have a begonia that’s happy to come indoors as a house plant, you need to bring it in before temperatures drop to 12C/55F. 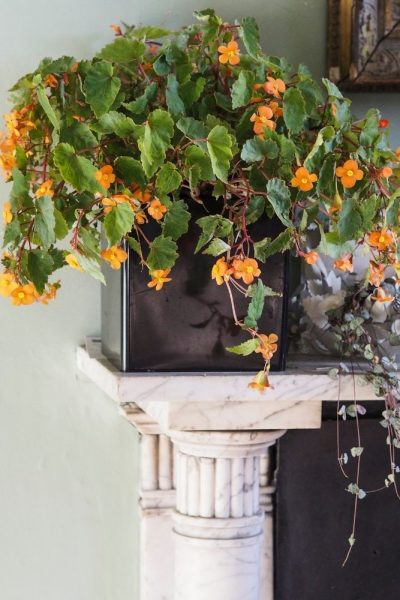 This Begonia Sutherlandii lived on my mantelpiece for a month or two, although tuberous begonias like this aren’t really suitable as house plants. It looked lovely in the garden the following summer. However, I didn’t bring it in early enough and it was killed by a frost the following autumn. There’s more about begonias as indoor outdoor plants over the The Horti-Culturalists video.

Once again, the cactus encompasses is a huge genus of plants. ‘The key to looking after a cactus is to remember that it’s a desert plant,’ says Alice. ‘So whether they’re indoors or outdoors, they need lots of light, but they store a lot of water, so don’t water them too much. A bright south-facing window sill is ideal. And let the soil completely dry out before you water them again. Or even leave it a bit longer.

There are a few cacti that can survive very cold weather, but most can’t. So you’ll need to check your variety before deciding whether to take it outside in the summer.

‘Fatsia can be kept inside as a house plant,’ says Maddie. ‘But they need to be kept away from any heat source, such as a fire or radiators.’ They don’t want to be in ‘bright, bright sunlight’, she advises and ‘they are quite shade tolerant as well.’ 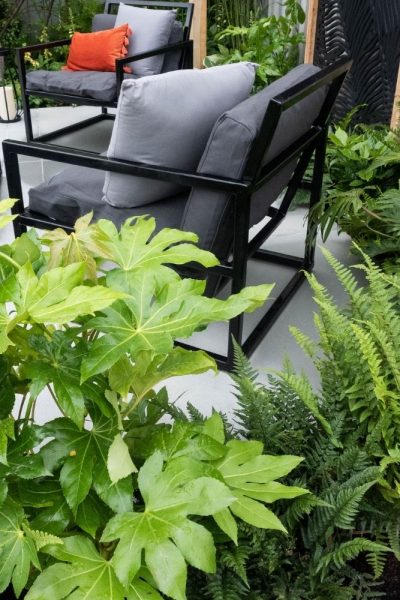 Stephen says that Fatsia japonica is a very good indoor outdoor plant. It survives normal UK winters and is happy in most situations indoors too. If you live somewhere very cold, bring your fatsia indoors before temperatures drop below minus 10C/14F.

‘It depends on the type of hoya, ‘ says Maddie. ‘But a lot of them have very waxy leaves, which means they’re tolerant to unfavourable conditions. Their leaves are less likely to crisp up than some other house plants if placed too close to a heat source, like a radiator or fire. And they can take quite bright light and keep the watering to a minimum.’

I remember Monstera deliciosa from my student days in the 1970s. Those plants must have been tough to survive the neglect of a student flat, but like aspidistras, they fell out of fashion until recently.

‘Monstera deliciosa has had a resurgence recently,’ says Alice. ‘They’re just such a wonderful house plant. Really, really easy. The brighter the light, the bigger the leaves will get, but they can also tolerate quite deep shade.’ Monsteras also like minimal watering – water them once about half the soil is dry, advises Alice. 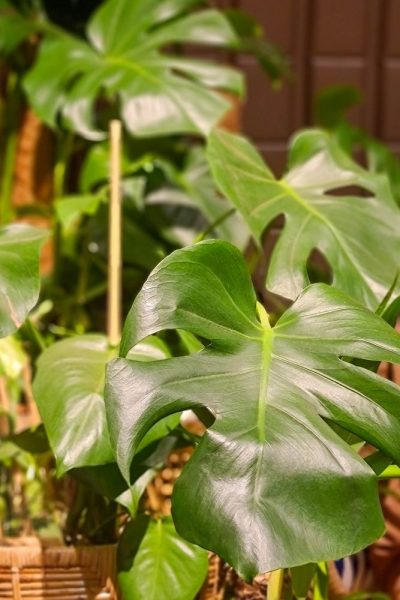 Monstera deliciosa is an easy-going indoor outdoor plant, but you would need to bring it inside when temperatures go down to 15C/60F. However Stephen’s winters are colder than that and he has Monstera growing in his garden – in a sheltered spot.

‘There are a few different varieties of philodendron,’ says Alice. ‘Although they’re known to be a shade-loving plant, I’ve known them to enjoy quite a bright spot too. They need a little more water than the thicker, fleshier-leaved plants. So water them once the top inch of soil has dried out. But they’re fairly tough. As long as they don’t go below 15C, they tend to be fine. 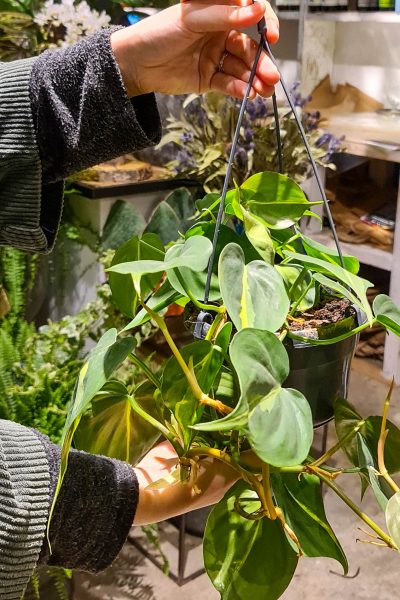 There are several varieties of philodendron. This is philodendron scandens, which is more tender than the big philodendrons in Stephen’s garden. Scandens won’t be happy if the temperature drops below 10C/50F.

There are thousands of different kinds of fern.

But although you will see them for sale as indoor plants and in outdoor nurseries, these are not exactly the same plants.

Generally you will need to buy your ferns either as indoor (tropical ) ferns or as outdoor plants. ‘The key to growing ferns inside is that they need a high level of humidity,’ says Alice. ‘They really suffer from dry air and will crisp very quickly if they’re too close to central heating.

If you’d like inspiration on growing ferns and other house plants indoors, here is an unusual post on styling house plants.

And can I treat palms as indoor outdoor plants?

But Alice says that, as with ferns, you need to buy your palm either as an indoor or an outdoor variety. The parlour palm, for example, won’t like the sudden drops in temperature you can get outside even in a warm temperate summer.

Tree ferns grow well in many cool temperate climates, such as the UK and USDA zones 9. They offer much of the tropical feel that palms do. Find out more about growing tree ferns in a cool climate here.

The Horti-Culturalists is a new channel this year. It’s quickly picking up a following for its informative and fun advice on unusual, rare or exotic plants and how to look after them. It’s run by Stephen Ryan and Matthew Lucas. Stephen grows rare plants in his nursery in Mount Macedon near Melboure, and was formerly a presenter on Gardening Australia (considered to be like the UK’s BBC Gardeners World).

Although many of the plants featured look exotic or tropical, the Horti-Culturalists broadcast from just outside Melbourne, Australia, where the climate is ‘cool Mediterranean’ with some quite cold winters and warm or hot summers. That’s pretty close to the UK or a USDA zone 9. 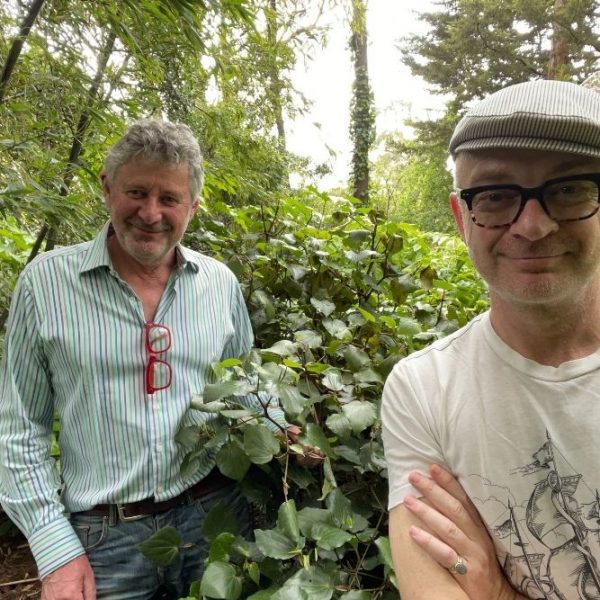 Stephen Ryan and Matthew Lucas of The Horti-Culturalists

And do join us for a free weekly email with more tips, ideas and inspiration for your garden.