How To Grow Vanilla Beans: The Vanilla Orchid 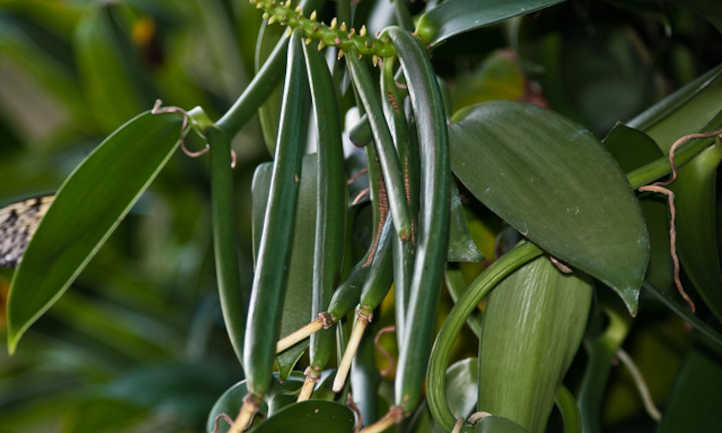 How To Grow Vanilla Beans: The Vanilla Orchid

One of the most beloved flavors in the world is vanilla. Vanilla extract is essential for baking, and it’s a lovely flavor for most confections. This leaves a lot of gardeners wondering how to grow vanilla at home. Vanilla bean plants are lovely climbing orchids that host vanilla beans with patience.

But growing vanilla bean plants isn’t as simple as planting seeds and watching them take off. A vanilla orchid has specific needs, based on the native habitat of vanilla orchids altogether. You may already have some idea of what growing orchids is like, but don’t let that discourage you!

It’s possible to grow a vanilla bean plant in a controlled environment. With so many different types, you can have vanilla flavoring of many kinds. Your own vanilla seed pods will taste that much better when you’ve done the planning and work of caring for a vanilla bean orchid. Let’s cover caring for vanilla plants, and the different varieties out there. You’ll be on your way to growing your own vanilla pods in no time.

This piece covers the two most popular cultivars of vanilla plants: Vanilla planifolia and Vanilla tahitensis. These are commonly referred to as Vanilla, vanilla orchid, flat-leaf vanilla, or West Indian vanilla. Vanilla tahitensis originates from southern North America where Aztec peoples hybridized two varieties into one. Vanilla planifolia is native to Guatemala, Mexico, and Belize. Both were transferred to Europe via Spanish conquistadors in the years 1300-1500.

These are vines that use trees for support. They grow in a tropical climate under rainforest lower canopies. The vines zig-zag and have elliptic leaves. After a few years of vanilla vine growth, a greenish, yellow, or white flower forms. The flower lasts only one day. In this small window, self-fertile flowers pollinate. If no pollination occurs, the flowers drop.

As the climbing vine matures a few years and pollination is successful, the fruit begins to form. They first resemble small 6 to 9-inch bananas that take about 6 months to mature. Aged pods are harvested and cured for extraction. Usually, the entire pod is macerated and distilled in alcohol for flavoring. Some scrape the inside of the pod and use real vanilla to flavor all kinds of culinary confections.

Most of the plants used for growing vanilla extract come from Madagascar, Tahiti, and Mexico. It can only be cultivated in the wild at 10-20 degrees north and south of the equator. In captivity, it is necessary to hand pollinate.

Here are a few of the varieties commonly cultivated by curious gardeners who are up for the challenge.

Unless you live in a region where tropical conditions exist year-round, you’ll want to have a controlled environment for your vanilla plant. If you live in Southern Florida, the base of a tree in an area where there is bright filtered shade in the afternoon might work. In all other regions, plant vanilla plants in small pots with an orchid potting mix.

Make sure your orchid has a pole to climb or some kind of support system for upward mobility. The container and potting medium need adequate drainage, as orchids of this kind do not like to be waterlogged. Use a sanitized cutting implement, and remove ⅓ of the bottom roots. Then, plant the rest of the plant and add your stake, pole, or whatever you will use to train your vanilla plants.

A vanilla plant can be tricky, so it’s important to know what is required in raising vanilla beans. Stick to the guide, and you’ll be harvesting vanilla beans in under a year!

A vanilla plant needs indirect sunlight in the morning and evening, and bright filtered shade in the afternoon. Too much direct bright light burns the plant and causes damage to the roots. Experts agree that the south side of a greenhouse shaded by a large tree is a great option. Because the USDA hardiness zones are limited (10 and 11 only) make sure you have a carefully monitored and managed space for vanilla beans to grow.

Vanilla plants prefer a warm environment and don’t do well in temperatures outside the 75 to 85-degree range. Outside this range, leaves will yellow and drop, and the vines won’t produce beans. It’s possible to grow vanilla beans in a grow tent where a greenhouse isn’t accessible or possible. This may be a better option as it’s easier to control the climate in a grow tent.

This is probably the thing most people get wrong with members of the orchid family. They want the soil evenly moist, and they prefer high humidity and good air circulation. Let the top 2 to 3 inches dry out between regular watering. When the lovely orchids begin to bloom, allow the entire plant to dry out for a few weeks between watering. Vanilla beans need at least 85 percent humidity. You can achieve this via grow tent controls, or by misting your orchid with a spray bottle. A humidity tray below your orchid might help in greenhouses that don’t achieve the required ambient humidity. Even a humidifier can be a boon here. Vanilla beans need controlled, consistent humidity all year round.

Just as temperatures outside their range can kill them, so can a lack of humidity and overwatering. Likewise, use distilled water to provide irrigation rather than tap water. Water in the morning hours.

Vanilla beans need a mix of half orchid bark and half sphagnum peat moss. You could also use an entire pot of bark if you’d rather skip the moss or if it’s not available in your area. Use a mix and pot that is well-draining. Do not try to use a poorer quality potting mix, as this will kill your plant. Keep the pH between 6.6 and 7.5. Give your vine the right environment to grow in and you’ll harvest vanilla down the line.

Vanilla beans appreciate a heavily-diluted high-nitrogen fertilizer weekly (30-10-10 NPK) when it is actively growing. Only add fertilizer when the soil is moist, as adding at the same time the bark is dry will damage the roots. When your orchid is dormant, lightly fertilize with heavily diluted orchid fertilizer (20-20-20 NPK). Remember to only fertilize your vanilla when the soil is moist, in between waterings, and do so in the spring and summer months, especially.

Unless you’re ready to propagate your vanilla plant, you shouldn’t need to prune. Train your vine with a pole covered in sphagnum moss, or up fences. Gently hang the vine on a nail attached to your training area if you don’t have a pole covered in moss.

Propagation for this plant is via cuttings. Because the oils from the plant can burn skin, do this with gloves and long sleeves.

Cut pieces that are 6 to 8 inches long, and contain two to three nodes. Make sure there is ample stem at the base to push it down into the soil. Leave at least one inch above the top node. Put each cutting in the same type of potting medium and smaller space you have your original plant in. Add enough water to moisten the planting media and let them rest in an environment optimal for orchids. As a couple of inches of growth occurs at the top of the plant, take out the cuttings to look for roots. If there is ample root growth (3-5 inches of healthy white growth), congrats! You’ve successfully propagated vanilla orchids.

As mentioned at the beginning of this piece, your vines must be hand-pollinated on the day they flower to produce beans. Use a chopstick or cotton swab to remove pollen from each flower in the morning hours. Then use the stick to add pollen to the female parts of the flower, which are hidden away under a flap. You’ll know if you were successful in just one day. The flower will wilt and stay on the vine. If it falls off, pollination did not occur. Within one week, green pods begin to form.

Here, we’ll cover the process of hand-pollination, harvesting, and storing your beans. We will also discuss how to sweat the beans and cure them for later use.

The pods will begin to turn yellow and elongate during their development, eventually turning a light brown color. In 6 to 9 months the pods turn dark brown. When they’ve reached dark brown, it’s time to harvest the beans.

Either let the beans mature on the plant, or remove them, blanch them, and cure them. Use a sharp sanitized implement to extract the pods, then blanch them in boiling water for a few minutes. Wrap them and place them in a cool dry location at night. Sun-dry them during the day. Repeat this for about a month, and then store your beans.

Cured dried beans (i.e. Madagascar vanilla beans) will keep in an airtight container indefinitely. You can also scrape out the insides of the pods to make vanilla paste. Store it in an airtight container at room temperature for up to three years. Do not freeze or refrigerate vanilla as this shortens its shelf life drastically. Infuse spent pods into alcohol or blend them into sugar for later use. Vanilla extract is easy to make too. Let the beans sit in vodka for at least 8 months, and voila! Vanilla extract. Homemade vanilla extract can’t be beat!

There are a few things to watch out for when you’re growing this plant. Keep this in mind, and you’re set!

Most problems with this plant stem from over and under-watering, and a lack of proper humidity. Maintaining the humid but not soggy environment vanilla likes can be tricky!

The only two pests to look out for are spider mites and mealybugs. Both suck the sap from your plant. For mealybugs, use a cotton swab dipped in rubbing alcohol to force the white, fluffy bugs to release. Neem oil or horticultural oil can be applied for mites, but also are preventative against mealybugs.

The only disease you have to worry about is rot. Overwatering causes fungal stem rot which may kill your plant. If you notice brown flimsy stems and overly saturated planting media, remove the entire plant, trim off the rotted parts, and transplant the cutting into new, dry media. Then add a little bit of moisture. Keep the air circulating and the media moist for rooting.

Q: Can you grow vanilla at home?

A: Yes, in a controlled environment.

Q: How long does it take to grow vanilla?

Q: Is vanilla easy to grow?

A: Not exactly. But it’s very rewarding when you can help vanilla plants thrive, and even better when you can produce them.