How To Grow Leek Microgreens Fast And Easy 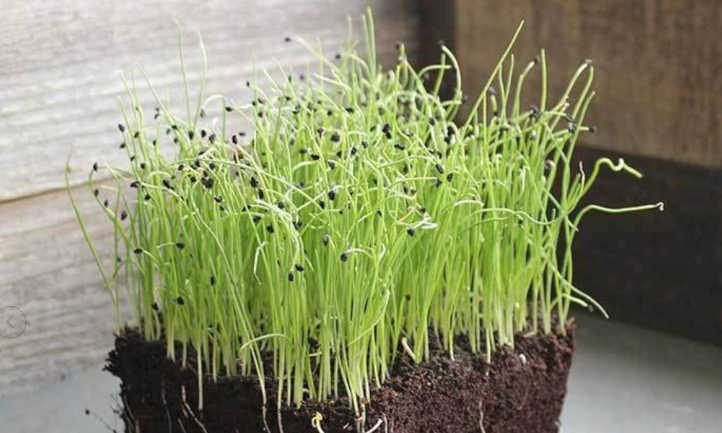 Leeks can grow so large that leek-growing competitions are all the buzz in Europe. But, what if we were to turn leek growing upside down and aim for the opposite: leek microgreens! Instead of a 3-foot tall monstrosity that takes months to grow, you can cultivate inches-long leek microgreens in just 10 days. Plus, you’ll get up to 3 harvests from each crop.

If you’re not familiar with leeks (Allium ampeloprasum), they’re part of the onion family and in the same genus as shallots, green onions, and chives. It’s no surprise that leek microgreens taste like onions, but a bit sweeter. Though their size is scaled down, they still have a strong flavor. Also like onions, leek microgreens have a stringy texture. Unlike onions though, they won’t make you cry!

So why not give leek microgreens a shot? They’re sure to make a fun addition to your indoor garden. Maybe you’ll even get hooked and venture on to grow other types of microgreens.

Leeks, like all alliums, produce bulbs. Those onion-like bulbs come from seeds though, which we’ll use to grow microgreens. Any variety of leek will do and the seeds don’t need to be marketed specifically for microgreens.

You’ll likely need an ounce of leek microgreen seeds per 10×20 inch tray. Remember that leek microgreens have a strong onion flavor, so a little goes a long way while cooking. Keep that in mind when deciding if you want to grow more than one tray.

It’s tempting to skip over the grow lights, but they’re actually an essential part of growing any kind of microgreens plants. In order to grow properly, the plants need light just a few feet directly above them. Substituting the grow light with sunlight will result in etiolated, scraggly microgreens. Similarly, sun damage can occur if the sunlight is too hot or prism-like through glass, and a grow light prevents that problem.

Though some seeds complete germination faster being soaked in cool water, leek seed doesn’t need it. The tiny black seeds are natural pros at germination.

We’ll start with preparing the growing tray. Grab the tray with drainage holes and set the other one aside for later. Fill your growing tray with a growing medium to just below the brim. Smooth out the soil surface as evenly as possible and slightly compact it down.

Give the microgreens seeds a good misting of water, then get your second tray. Instead of coving the seeds with soil, we’re going to place the hole-less tray directly on top of the seeds (they should be touching). To keep the tray down, place a small weight on top. As they grow, the leek microgreens will collectively push up the weight (they can handle up to 5 pounds).

By placing the cover tray, you’ve officially started the blackout period for your leek microgreen seeds. For the next 3-4 days, the seeds will absorb the soil moisture, complete germination, and sprout. We’ll leave the cover on for another 2-3 days, encouraging the sprouts to grow strongly against the weight.

Leek seeds germinate best when the soil is around 75°F. It’s not required, but you can use a heating mat to meet this need. After the seeds have completed germination, immediately remove the heating mat.

By now, your leek microgreens must be thirsty. Your goal is to water the growing medium without getting the leafy growth wet. Since the greens are so close together, even a little excess water can encourage bacteria growth. To keep things dry, you’ll need to water from the bottom.

This is where you can reuse the cover tray. Simply fill it with a few inches of water and place the growing tray inside it. The soil will lap up the water through the drainage holes without getting the leaves wet. After 10-20 minutes, remove the tray so that the soil isn’t sitting in water. Repeat this process whenever the soil surface starts to dry out.

Your leek microgreens will grow steadily from here, soon reaching 3-4 inches tall. At that time, we’ll move on to harvesting the greens.

Leeks are monocots, so each seed produces a long, thin, and solitary cotyledon (they look like miniature chives). The cotyledon usually hangs onto the black seed hull, giving the crop a polka-dotted look. The seed hulls are actually edible and said to have a garlic aftertaste.

Prior to harvesting, don’t water your leek microgreens for 12 hours. The decrease in moisture will help them stay fresh longer. Next, use your shears to clip the microgreens in bunches. You can harvest all at once or space it out over a few days. Keep in mind though that the cotyledon ends may dry out and turn brown at the tips. If this happens, harvest before they dry more. If you’re not ready for the whole batch, try using a humidity dome to prevent further moisture loss.

Microgreens are usually a one-and-done business, but not with leek microgreens! Because they grow from the base of the plant, not the top, leek microgreens will regrow after harvesting. You can squeeze 2-3 full harvests out of a single planting as long as you leave at least half an inch of the stem.

The default way to use microgreens is in salads. However, you can use them in any dish you would put onion in, such as eggs, hamburgers, spring rolls, or soups. They’ll stay fresh longest if you only wash them right before use.

Unused leek microgreens need to be kept as dry as possible. Wrap them in paper towels and seal them in a bag. Stash them in the fridge and they should last about a week. To get a bit more time, change out the paper towels every few days.

A: They have a mild onion flavor.

Q: What are micro leeks?

A: They’re leeks that are harvested as very young plants. This stage of growth provides an excellent onion flavor and more nutrients and nutritional benefits, like heart health, than mature leeks. Among many other nutrients, leek and onion microgreens are a good source of Vitamin A, magnesium, potassium, and iron.

Q: What are the tastiest microgreens?

A: That depends on what you’re cooking! Onion microgreens are delicious in savory dishes. My favorites, though, are microgreens with a spicy flavor, like nasturtiums or radishes (they taste great in sandwiches!).

Q: Can onions be microgreens?

A: Absolutely! Technically, all vegetables can be microgreens. Onion microgreens are very similar to leek microgreens in their delicious flavor (though they have less vitamins).

How To Grow Leek Microgreens Fast And Easy