How to grow chrysanthemums for magical late season colour 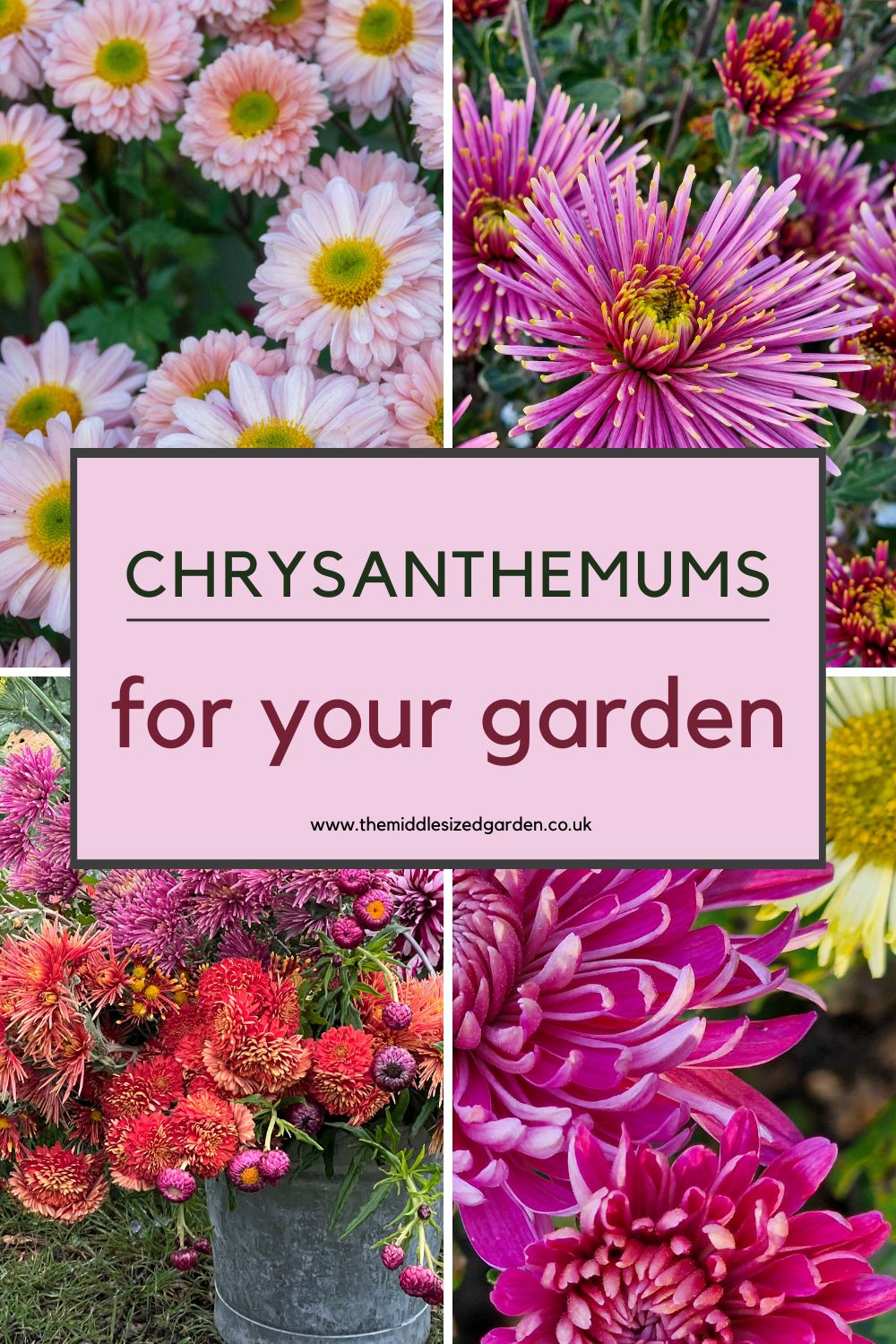 How to grow chrysanthemums for magical late season colour

And they’ll add brilliant late-season colour. When the rest of your garden is collapsing gently into the beginnings of winter, chrysanthemums will carry on blooming.

They come in a wide range of colours and styles, from demure daisy types to vibrant swirls of outrageousness.

A bucket of Dan Cooper’s homegrown hardy chrysanthemums. The flowers are long-lasting, both in the garden and as a cut flower, but Dan thinks that people think that it’s difficult to grow chrysanthemums – but it’s not!

So I asked Dan Cooper of the online gardening shop Dan Cooper Garden for his tips on growing chrysanthemums.

But he loves colourful, dramatic flowers and his Frustrated Gardener blog has become famous for its glorious accounts of tulips, dahlias and exotic planting.)

If you prefer to watch a video, see the interview with Dan Cooper here on YouTube.

Will chrysanthemums come back?

This is Chrysanthemum ‘Allouise Salmon’, grown by Country Lane Flowers in their own garden. It’s not fully hardy so they grow it again from cuttings every year, but it’s still practical for the non-professional gardener to grow in their garden.

But there are lots of hardy chrysanthemums which are like any other perennial in the garden. Although different varieties vary, many of these chrysanthemums can survive winter temperatures of minus 10C/14F  or even much colder.

And if your winters are too harsh, you can lift and store them like dahlias and cannas.

Dan suggests you look for Korean, Rubellum or Hardy Spray chrysanthemum varieties. If whether it’s Korean or Rubellum etc isn’t specified, you can check the label for hardiness or find it in the information from the seller.

This glorious ‘Tula Purple’ chrysanthemum is like a firework. Dan leaves this in over winter and it comes back in spring. His winters are fairly mild and it’s rare to go below minus 6C/21F.

How to care for chrysanthemums

Your chrysanthemum cutting will be about 4″/10cm  when it arrives. Pot it up into a 9cm pot immediately. This gives it a chance to develop a good rootball before you plant it outside in the ground. Keep it in a light, cool, frost-free place.

In 2-3 weeks, it should have more than doubled in size. At this stage, Dan advises you to ‘pinch it out’, also known as ‘pinching back’.

How to pinch out chrysanthemums

‘Pinching out’ means cutting the top of the plant off, just above a leaf node. You’ll reduce the height by one third to a half, leaving perhaps only 4 or 5 leaves below the cut.

The plant will then send out both side shoots and root shoots. It will grow more bushy and sturdy. You’ll also ultimately get more flowers, although they may be slightly smaller. People who grow chrysanthemums as show flowers want huge blooms, so they don’t pinch them out.

‘Pinching out’ is an important step when you grow chrysanthemums. You’ll get a bushier plant and more flowers. The part you snip off can be planted as a new cutting.

How to plant chrysanthemums

You can plant chrysanthemums once the rootball has grown big enough to fill the pot. You’ll see little roots coming out of the bottom of the pot. Or you can slide the pot off to check.

Before planting, ‘harden the chrysanthemums off’. This means putting them outside for two hours on the first day, then leaving them outside for twice as long the following day. Increase the time again on the third day, and so on for around a week. This makes a big difference to how the plants flourish.

Dan suggests you add some compost, manure or blood-fish-and-bone to the planting hole, although he says ‘chrysanthemums don’t need anything special.’

If you have a dry, hot summer, they’ll need some watering, but Dan says they are generally resilient and drought-tolerant once established. ‘And because they flower late, they’re not trying to flower in a summer heat wave or drought, so they’ll be less affected.’

This is Chrysanthemum ‘EH Wilson’. When I visited Dan’s plot in spring, there were a couple of small plants around a foot high. When I went back in autumn, they had turned into a huge cloud of flowers. Dan leaves this in over winter, as it can survive temperatures down to minus 15C/4F.

The only other job you need to do when you grow chrysanthemums is to stake or support them. Dan recommends you do this in early or midsummer. He usually uses a single stake, then ties the plant with string. He says you can also use the metal hoop supports or any other support system you would use for perennials.

Dan uses a single stake and ties the plant in with string, but you can use any support system you prefer. But the earlier you put supports in, the better!

How to look after chrysanthemums in winter

Some chrysanthemums can survive really quite harsh winters in the ground. Dan says they really don’t like getting too wet, because they can rot. So if you rarely go below minus 10C/14F, you’ll probably be fine with leaving your chrysanthemums in the ground, unless you have heavy rainfall. Generally, it’s rare for UK winters to go below minus 6C/21F unless you live in the North and on much higher ground.

Different chrysanthemum varieties survive very different winter temperatures. When I was checking the hardiness of various chrysanthemums for this post, I came across chrysanthemums that apparently can go down to minus 26C/minus 15F and others that wouldn’t survive more than one night of hard frost. So you’ll have to check each variety separately and accept a certain amount of trial and error.

Dan cuts his chrysanthemums back to around 6″/15cm. He then adds a layer of garden compost or well rotted manure around the roots to help protect them. (It also feeds the soil for next year).

‘But I don’t cover the plant with compost,’ he says. ‘I find that leads to rot.’

How to lift and store chrysanthemums for winter

If your winters are regularly very harsh, then you can lift and store chrysanthemums as you would dahlias. Dan cuts them back to around 3″/8cm and digs them up. He trims the roots a little and plants them in a pot. He then keeps the pots in a cool but light place. ‘That’s the only difference between over-wintering dahlias and over-wintering chrysanthemums,’ he says. ‘Dahlias are kept in the dark over winter, while you keep chrysanthemums in the light.’

Chrysanthemum ‘Burnt Orange’ looks like a firework and is good for pollinators because it has an open centre. Happy in sun or partial shade, and survives winters down to minus 10C/14F.

Do chrysanthemums grow well in pots?

Yes, chrysanthemums grow well in pots. Dan says that professional growers often grow them entirely in pots, because they can be moved inside more easily as winter approaches.

At Country Lane Flowers, Sue Oriel grows her Chrysanthemum ‘Seaton’s Galaxy’ in pots for exactly this reason. Seaton’s Galaxy is potentially hardy down to about minus 5C/21F, but Sue prefers to move them into her greenhouse before any hint of frosts.

Country Lane Flowers grow all their flowers in their own gardens, so although they sell flowers for bouquets and events, the way they grow them is much closer to the home gardener than to many professional flower growers.

Seaton’s Galaxy is a firework of a chrysanthemum. Here it’s grown in a pot by Country Lane Flowers, but you could grow it in your garden, although you would need to either over-winter it in a greenhouse or start new from cuttings every year.

What plants grow well with chrysanthemums?

Dan says that it looks good to grow chrysanthemums with grasses. There’s a good contrast of shape and form, and ornamental grasses are at the best in autumn too.

Dan gave me some cuttings of Chrysanthemum ‘Burnt Orange’. They’re almost the only plant still in flower in my garden in November. I’ve partnered it with Pheasant’s Tail grass (Anemanthele lessoniana) and love the way this part of the border glows from a distance.

Other good plants include dahlias and salvias, both brilliant for late season flowering. To find out how to grow salvias, see this interview with the UK’s leading salvia expert. And for everything you need to know about dahlias, see our interview with Steven Edney.

Dan set up Dan Cooper Garden after the success of his Frustrated Gardener blog. He’d spent many years working in retail, most recently as head of Christmas for a famous UK store chain. So he wanted to combine gardening advice and good gardening tools, accessories and clothing – and of course, with his ‘Christmas hat’ on – gifts. He also has a delightful collection of gardening themed Christmas decorations.

We also interviewed Dan on how to group pots to create a ‘border’. Dan creates a ‘pot border’ with tulips and daffodils in spring and dahlias and exotic leafed plants in summer and autumn. His apron is from Dan Cooper Garden.

Pin to remember how to grow chrysanthemums

And do join us – see here for a free weekly email with more gardening tips, ideas and inspiration for your garden.