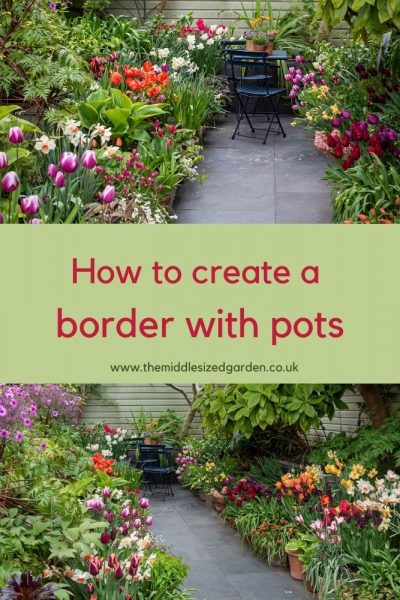 When you group pots to create a complete border with them, you can achieve the colour and impact of a herbaceous border in a smaller space and often over a longer time.

If something isn’t working, you can move it round or take it out and put something else in. And you can experiment with different colour combinations and looks.

Dan Cooper uses this technique to turn his 20ft x 30ft (7m x 9m) courtyard into a garden that has been featured on BBC Gardeners World and in top garden magazines. 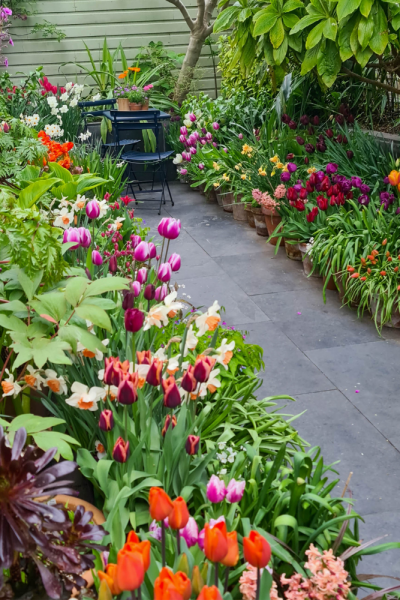 Dan Cooper’s garden. There are 100 pots, with roughly 50 on either side of the central path. As daffodils and tulips go over, he’ll replace them with early summer flowering plants, such as aquilegia. Then there’ll be a complete changeover to ‘the jungle garden’ around the end of May, which will last until the autumn.

And Dan’s own blog, The Frustrated Gardener, has become so successful that he has left his job working for a major retailer to start Dan Cooper Garden, selling his favourite garden tools, pots and accessories.

So I asked Dan to explain how to group pots into a border, and also to give us some practical container gardening tips. 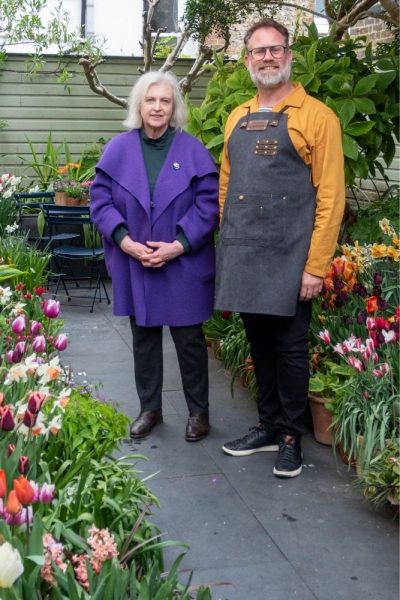 Dan Cooper and I discussing how to make the most of garden pots. His gardener’s apron comes from Dan Cooper Garden.

At the time I visited, the pot border was a riot of tulips and daffodils, but later in the year, he changes it to a richly exotic ‘jungle garden’ look.

How to group pots – display tips

Dan treats the pot garden as a ‘theatre’. ‘Place the taller pots and plants at the back and the smaller ones at the front,’ he says. 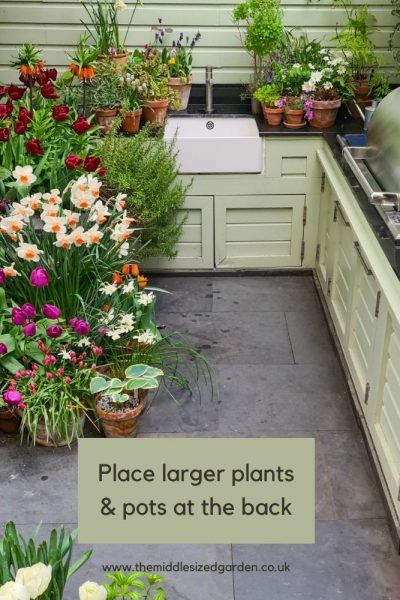 Group pots with larger plants at the back and smaller ones at the front. This is Dan’s outdoor kitchen, and he shared his tips on installing an outdoor kitchen in this post.

And when it comes to which pot or plant looks best next to which, he advises you to experiment. ‘That’s the wonderful thing about a container garden. If you get something wrong in a border, or you don’t like what you’ve planted together, there’s not much you can do about it.

But when you group pots to create a border, you can move things around until you’re happy with the combinations.

‘Try not to put the same colours next to one another or the same kind of plants side by side.’

But repeat plants and colours. ‘We try quite hard to bounce the colours down the garden,’ he says. ‘So if we’ve got an orange flower on one side, we’ll repeat it a bit further up on the other. So your eye is drawn towards the end.’

Make sure you have some green in between the bright colours. ‘This is a densely planted colour scheme,’ he says, ‘It’s much more colourful than you would get in a garden, so you need some calming elements.’ 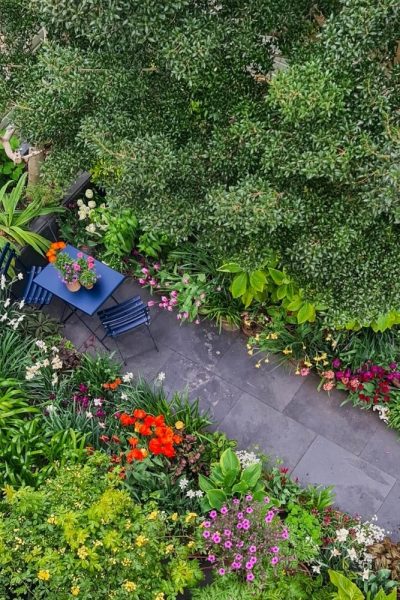 The garden from above. Although it looks very colourful closer up, this picture shows that there is actually lots of green foliage in it too. Dan says that you need enough green or the colours will be too jarring. The big tree at the top is Phillyrea latifolia.

Plant one kind of plant per pot

Dan doesn’t combine different varieties of plants in his pots. He says it’s easier to position plants when there’s just one kind of a plant in a pot.

‘Plant a single variety of, say, a bulb, and you can cram them in,’ says Dan. ‘You can move them around easily within the grouping.

And you get each plant absolutely at its prime.

‘And if you are growing bulbs that you want to use again for a later season, you’ll know which ones they are.’ (Dan puts labels in his pots, so he knows which variety of plant he’s got.)

This is a very different look from the compositions we’ve featured in the post on top plants for a brilliant winter container display, but different approaches work well for different situations.

But maximise the colour by planting lots in each pot

Dan fills his pots with plants – there’s no bare compost showing. ‘We’re quite extravagant with the number of plants we put in a pot.’

‘It ensures you achieve an abundance of colour in a small space,’ he says.

Limit the varieties of plants

There are around 100 pots in the garden, but Dan limits the varieties of plants. He tries to have at least two, and often four, pots of the same variety of plant.

He also says that too many different colours and varieties could be too much. It would be jarring. 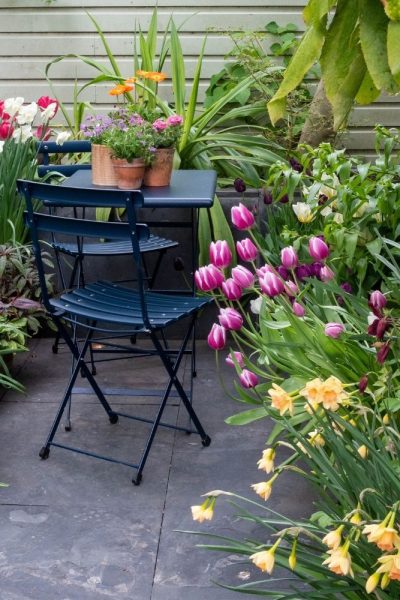 The pink tulips are ‘Chansonette’ and there are several pots of them, one on the other side of the garden and at the other end of the border, so the eye will ‘bounce’ up the border to see the repetition. The table and chairs are from Dan Cooper Garden.

Do you plant directly into the ornamental pots?

Although there is a second small garden on the other side of the building, it’s  also very limited in space, so there’s very little space to store unused pots. Most of the 100 pots are replanted at least twice a year, and are on show in the garden.

He also plants about 10% extra into plastic pots, so he has extras to fill gaps.

Use a slow release fertiliser when planting up pots

Dan uses slow release fertiliser granules, which he adds when he plants up the pots. ‘The nutrition in the compost will only last a few weeks,’ he says. This is something I frequently forget to do, which means I have to feed my pots weekly with a liquid seaweed feed. So it really does save time to use the slow release granules.

How to water large groups of pots

Dan doesn’t have an automatic irrigation system, so he waters the pots manually. 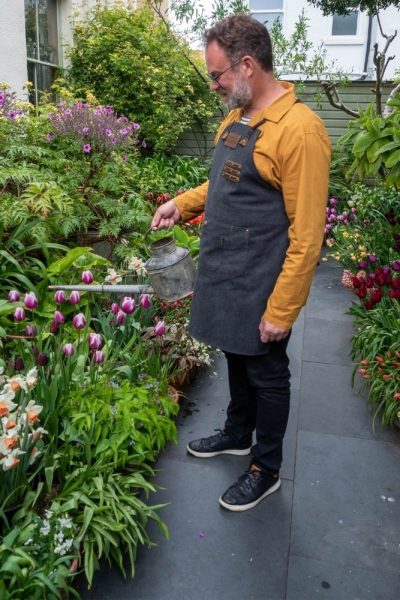 Dan uses a watering can with an extra-long spout to reach pots at the back of the ‘border’.

To reach pots at the back, you need a long spout on your watering can or a similar attachment for your hose.  They’re called a Spray Lance or Watering Wand.

Aim to soak the compost when watering rather than sprinkling water generally over the foliage.

If you group pots closely together, it helps prevent them drying out because it reduces transpiration. Dan points out that the foliage from each pot protects its neighbours from evaporation.

Start watering spring pots in early spring if the weather’s dry – twice a week, then every other day in summer. 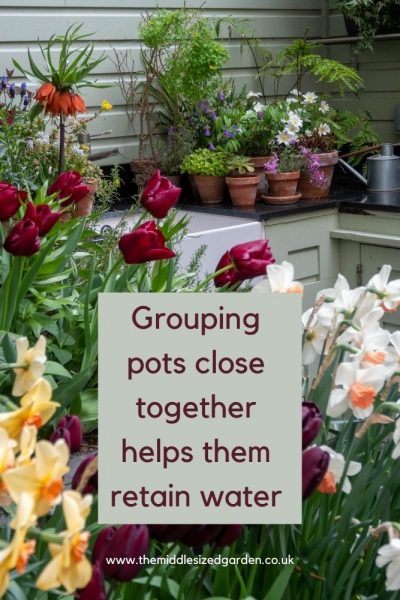 Small pots dry out more quickly than large ones do, but if you group pots together, they’ll retain water better, whether they’re small or large. You can see a glimpse of Dan’s outdoor kitchen here.

How to change groups of pots over from spring to summer

The changeover from the spring to summer display is part evolution and part revolution.

As hyacinths and daffodils go over, Dan takes those pots out and adds in pots of later flowering bulbs, or plants like aquilegia or nemesia.

That goes on until around early summer, when they complete the process with a changeover to the ‘jungle garden’. This has gingers, begonias and plants with large, luscious leaves. 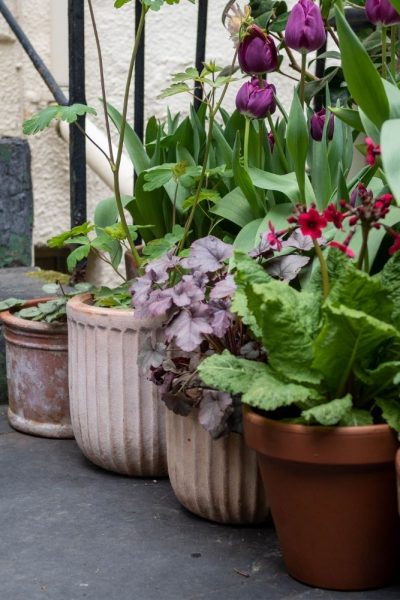 Dan is already bringing some early summer flowers – here is an aquilegia and a heuchera with the spring plants.

Do you need pot feet or crocks?

Dan doesn’t use pot feet. ‘We’re in a dry part of the UK, and we want to retain water in our pots most of the time.’

(If you’re in a very rainy area, you may benefit from pot feet, but it’s often hard for rain to penetrate the dense foliage of a fully planted pot. So it’s probably more important to avoid putting your plant pots in saucers in that kind of a climate.)

There’s been quite a lot of research by bodies such as ‘Which’ and the RHS which found no improvement in pots planted with crocks over those without. However, you’re often still told to put crocks at the bottom of your pots. I asked Dan whether he used them.

‘I’m on the fence when it comes to crocks. I think they probably aren’t necessary, except to stop compost dropping out the bottom of pots. But we use moss if we can instead.’

When you group pots, how do you get to the back of the pots in the display?

Dan says that it’s important to work safely when dealing with pots. They’re heavy and reaching over to the back of a display can cause back problems.

If he needs access to a pot at the back, he moves the pots in front of it, then moves them back again. It doesn’t take long and can save many problems.

For more about gardening without injuring yourself, see this post on How to Prevent Knee or Back Pain from Gardening.

Claus Dalby is another well known garden expert who like to group pots to create a border. See dahlias, by Claus Dalby here.

And you don’t always have to group pots. You can use them as focal points or to fill a gap in your herbaceous border. See 5 ways to display garden planters in your garden. If you don’t want the bother of changing pots seasonally, then evergreen pots look very stylish and are very low maintenance.

And although they are not all evergreen, there are more low maintenance pot ideas here.

Home Remedy For Aphids: Natural Remedies To Get Rid Of Aphids

It Must Be Fermentation Week…

Home Remedy For Aphids: Natural Remedies To Get Rid Of Aphids

It Must Be Fermentation Week…