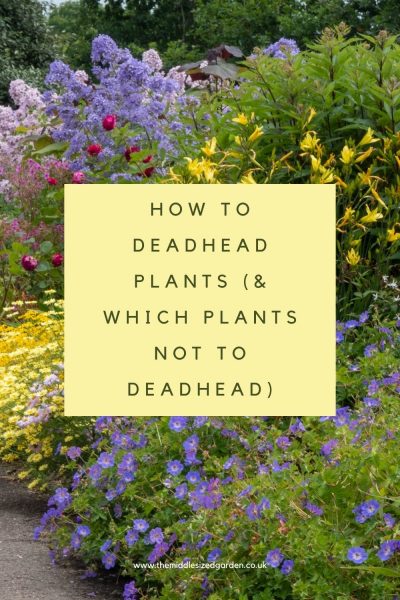 To deadhead plants, you simply cut off dead or dying flowers.

Deadheading is one of the easiest, yet most effective, gardening techniques. It’s also the best way of ensuring that your garden is full of blooms for as long as possible.

But there are a few things you need to know.

This stunning border at Borde Hill Gardens in Sussex is full of plants that will flower for longer if they are deadheaded frequently. That includes campanula, anthemis, roses and hardy geraniums.

Why do you deadhead plants?

When flowers die, the plant uses its energy to turn the dead flower into a seed head.

If you remove that dead flower, then the plant will concentrate its energy on producing the next flower. If it’s a repeat flowering plant, such as cosmos, most roses and dahlias, then you will get more flowers in a few weeks time.

Some plants, such as tulips, irises and peonies, don’t flower again the same year. But cutting off the dead flower means the plant will focus its energies on making the new flowers for next year. So you should get a better display next year. 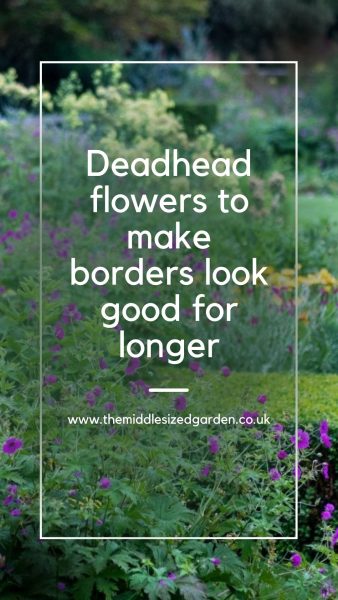 When you deadhead plants, they put energy into creating more flowers.

Do all flowers need to be deadheaded?

Firstly, you don’t need to deadhead every plant in your garden.

If you want the hips, berries or seed heads for winter interest, don’t deadhead plants.  I would never take off hydrangea flowers, for example, because in winter, their flowers usually dry on the plant. This creates beautiful sculptural shapes. And the old flower heads also protect the buds beneath from frost (a bit!). So leave hydrangea flowers until early spring, then remove them to make way for the new flowers. 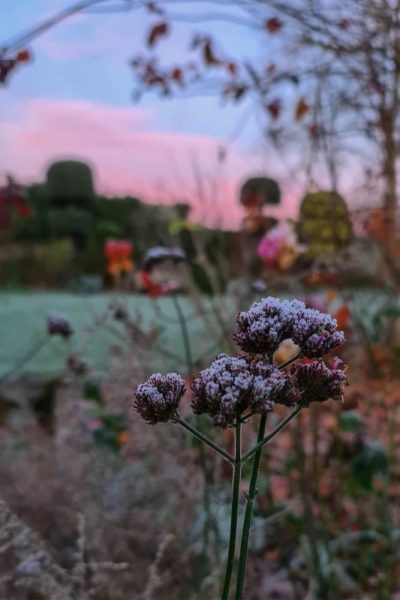 Verbena bonariensis seed heads look good in frost. And the birds eat the seeds in winter. So don’t deadhead plants you want as seedheads for winter interest. 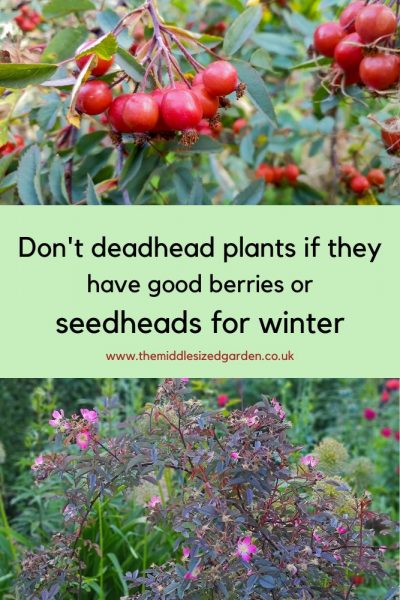 This is Rosa glauca. It’s not a repeat flowering rose and has good hips for winter. Check whether a rose has good hips when buying it.

And don’t deadhead any plants that you want to self-seed. I leave my allium heads in the border, for example. First they make lovely sculptural shapes. Then they collapse and self seed and I get more alliums. There are 25 top self seeding plants here.

Which plants do you need to deadhead?

The main purpose of deadheading plants is to give you more flowers later in the year. So you need to deadhead any repeat flowering plants. That includes many roses, dahlias, cosmos, penstemons, nepeta, astrantia and anthemis. 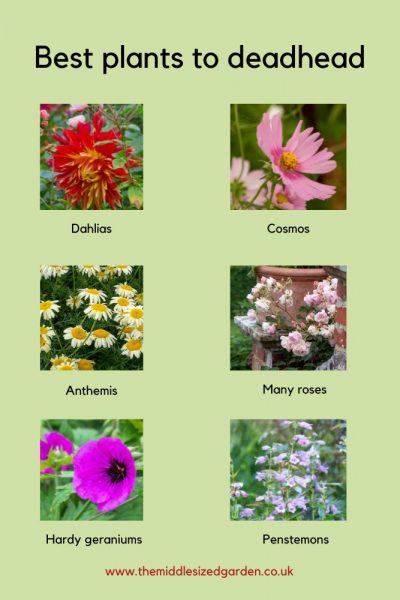 Sometimes it’s just the terminology that is different. You’ll probably be advised to ‘cut back’ salvias and hardy geraniums rather than ‘deadhead’ them. In mid-summer, some salvias get taller with just a couple of flowers at their tips. Chop them back by about a third to a half at this point, and they should flower again fully in about six weeks time.

When a clump of hardy geraniums has flowered, you can clip it back hard with shears. You can take it almost to the ground. It should come back with more flowers later in the year.

Sometimes you clip a plant back after it’s flowered to keep its shape under control. This is really pruning rather than deadheading, but it is still taking off the old flowers so that the plant can focus on new growth. So you don’t ‘deadhead’ lavender, but you should cut it back after it has flowered. I always cut my lavender back really hard. (See absolutely the best way to prune English lavender.)

You don’t absolutely have to deadhead bulbs, such as tulips and daffodils. You should get a few more flowers next year if you do, but it’s not always practical.

How do you properly deadhead plants?

You’re often advised to pinch off the dead flower with your finger and thumb. This works well if you have sharp fingernails, but I find that sometimes the stem of the plant tears off too, so it isn’t a clean snap.

Follow the advice of Frances Moskovits in How to Make A Herbaceous Border Look Amazing and use snippers (or even scissors). You’ll be able to snip the flower head off quickly and cleanly.

It’s also easier to reach into a crowded border with a pair of snippers or scissors. You can deadhead plants that you can’t reach with your hand.

Frances keeps a pair of snippers in the shed, and another in the house by the back door. She uses Darlac Compact Snips, so I bought a pair too. I find them excellent. (note that links to Amazon are affiliate, see disclosure.)

If you’re deadheading plants such as dahlias and cosmos, snip them down to the next leaf junction. That’s how to deadhead them properly. But, once again, if it’s a crowded border, you may only be able to reach in to snip off the flower head. That is much better than not deadheading at all.

See below how to properly deadhead roses. But otherwise don’t worry about doing it exactly right. Just remove those dead and dying flowers. That’s all there is to it.

Here is a short video on how to dead head flowers from my Middlesized Garden YouTube channel.

You can also see the garden in more detail, with more tips in the Summer Garden Tips and Tour video: 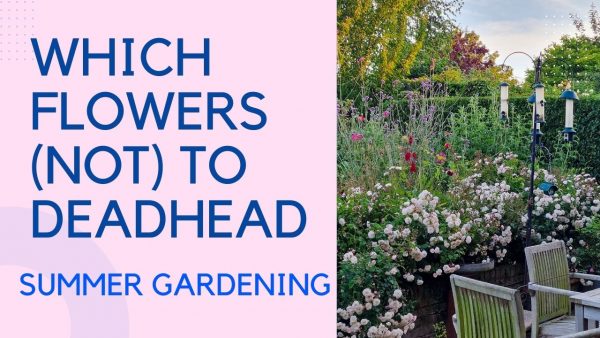 When should you deadhead plants?

You should ideally deadhead flowers as soon as they die.

Frances Moskovits estimates that she deadheads up to four times a day, which is far more than most of us would do.

But if you take a pair of snippers with you when you pop out into the garden, then you can probably deadhead most days.

We recently opened our garden for Faversham Open Gardens & Garden Market Day. One visitor said he was reassured to see that we don’t deadhead very often. In fact, I had snipped any dead or dying flowers off quite thoroughly just forty-eight hours earlier. The following day we were out all day, and I was too busy to go round with the snippers just before we opened. The day between had been hot, so a few flowers went over quickly. The lesson is to dead head just before any special event in your garden!

How to deadhead roses

I asked Neil Miller, head gardener of Hever Castle gardens, how to deadhead roses. Hever Castle has an award-winning rose garden, so he told me what you need to know about growing roses.

He said that you deadhead roses according to what type they are.

If you have a single stem with one rose on it, remove the faded flower down to the nearest leaf junction. In the past, we were always told to cut just above the first leaf junction with five leaf segments, but Neil says that doesn’t really matter. 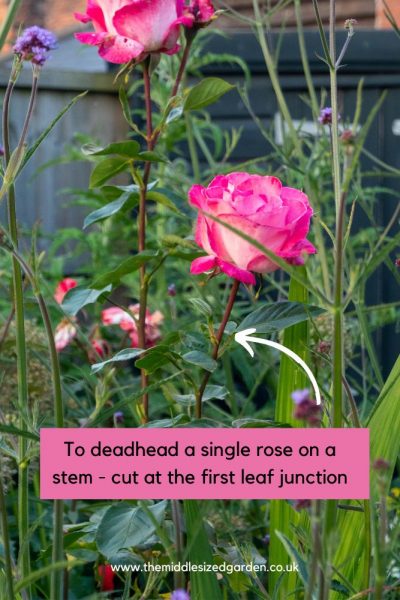 When a single rose on a stem dies, snip it off at the first leaf junction.

If you have a rose with a cluster of flowers at the top of the stem, it is called a ‘floribunda’. Snip any flower off as it dies to reveal the remaining buds. When each cluster has flowered and died, cut back the whole stem by about half. 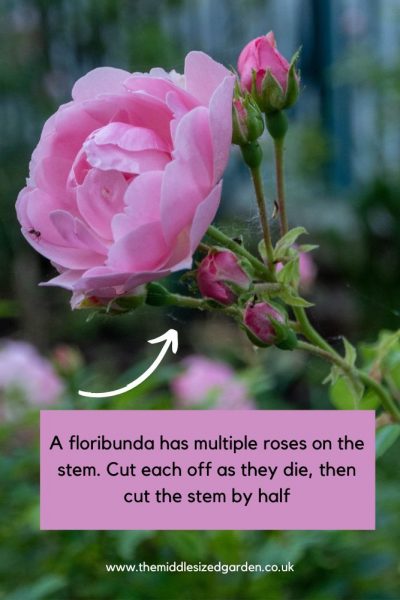 A floribunda rose has a cluster of roses at the top of the stem. Snip each flower off individually, then cut the stem by half. But if you have too many roses to do that, use shears (see below).

How to deadhead a row of roses

If you have a row of roses, then it can take too long to deadhead plants individually. There have been numerous tests showing that you can clip rose bushes back with shears and they will still repeat flower. However, the shape of the bush may need some attention at some point.

I have a row of Little Pet roses in my garden. I did an experiment where I cut half the row with shears. I deadheaded the groups of flowers more or less individually with secateurs on the second half of the row. That half flowered earlier than the row I cut with shears. However, both flowered again and for the same amount of time. 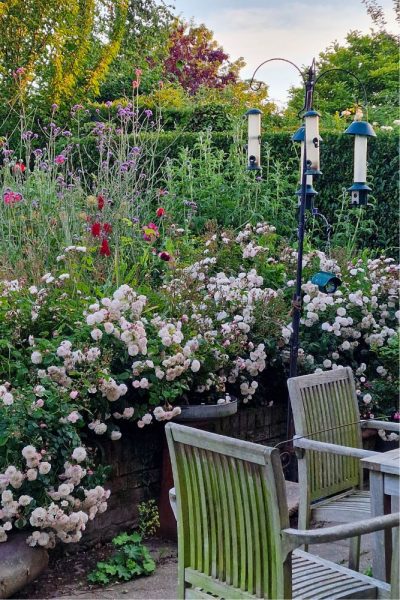 It would take far too long to deadhead this row of floribunda roses (‘Little Pet’) flower by flower. I used shears on one end and snipped them back with secateurs at the other. Both flowered again well, but the side cut with shears came back a little later.

Do you need to deadhead plants in pots and hanging baskets?

Yes. Your pots and hanging baskets will only keep flowering if you snip off any dead flowers regularly. However trailing Surfinia Petunias and trailing lobelia will just keep growing longer, so you don’t have to deadhead them.

Pin to remember how to deadhead plants

And do join us for a free weekly email with more gardening tips, ideas and inspiration.