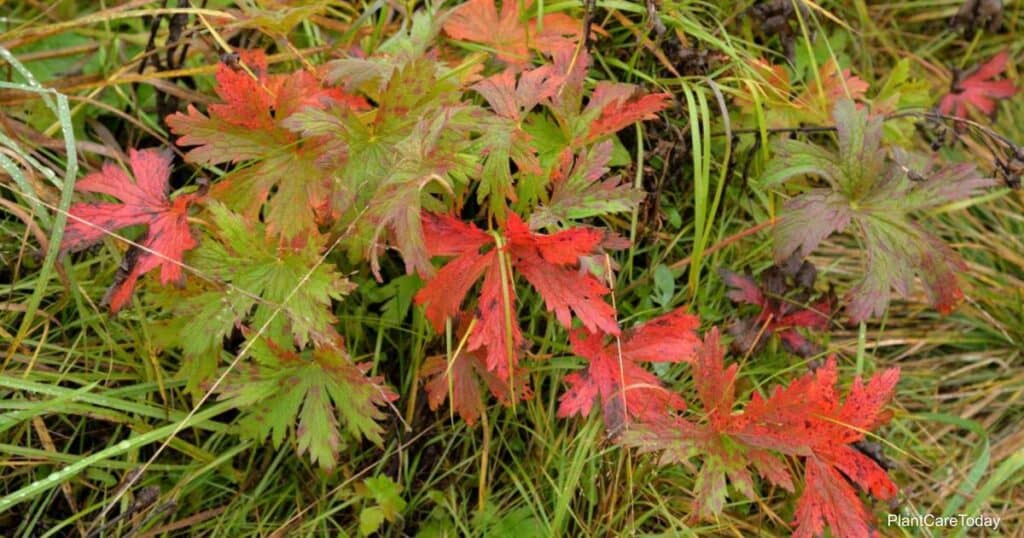 Chances are, the geranium plants in your garden are actually pelargoniums, a group of plants originally in the same genus as geraniums.

But that’s not to say their care is all that different, outside of pelargoniums preferring warmer temperatures (leading true geraniums to be commonly referred to as “hardy geraniums”.

One place where their similarities really show is in the way the various types of geranium all show stress.

While yellow leaves can be a sign of problems, so can red leaves, no matter how attractive they may seem.

This is because the natural pigment of leaf tissue isn’t actually green, but the chlorophyll present hides those natural colors, which may be yellow, orange, red, or even purple depending on the species of plant.

Why Are My Geranium Leaves Turning Red?

Red leaves are primarily a result of stress and can be caused by several different factors.

The following issues all cause red leaves and are listed starting with the easiest to diagnose.

One of the easiest ways to stress a pelargonium is to expose it to sudden drops in temperature.

Even hardy geraniums don’t like a sudden or prolonged exposure to cold temperatures.

This issue will most often happen during two seasons.

In early spring, the flushing can happen as weather slowly warms up and will generally disappear on its own, although waiting until April to plant can greatly reduce the risk of red leaves.

In autumn, the changing weather means it may be getting too cold for your plant.

Some growers will leave their geranium as is, throwing some mulch over the roots and enjoying the changing leaves.

However, those living in more northern zones will use this as a sign that it’s time to move the plant indoors to overwinter.

If overwintering in this manner, choose this time to prune back the plant, making sure to remove any red leaves before bringing it inside so it won’t be wasting resources.

They should teach every kid this simple fact about plants: If there’s a plant and there’s a problem, it’s probably poor watering habits.

When your geranium is turning red in summer, this is most likely the cause, although it can happen in other seasons as well.

Diagnosing and treating a geranium for water issues is as simple as sticking your finger in the dirt.

If the soil feels soggy or wet, the plant is getting too much water.

Consider mixing some perlite into the soil to help with drainage and wait to water the plant until the soil is sufficiently dry.

Adding a substrate of gravel below the planting layer or in the bottom of a pot can also help ensure good drainage.

But more often than not, the red leaves are due to severely dry soil.

You should be watering the plant when the soil feels dry 1” inch deep, and while geraniums can be drought hardy, they still need a drink now and then.

Make sure to use tepid water so you don’t cause a reaction to temperature and avoid getting the leaves wet when you water.

Imagine waking up one morning in a strange place with unusual sounds and smells and no explanation.

This is similar to what your geranium may be going through if you’ve transplanted it outdoors too quickly and it will show it’s stressed by flushing red.

Transplant shock tends to happen when a plant is planted outdoors without getting a transition period.

Prevention of this problem is a simple matter of patience.

Before planting it in the garden, take your plant outside for an afternoon, then for a little longer the next day.

In about a week, the plant will be acclimated to the less stable weather of the great outdoors and can be transplanted to its permanent home without getting stressed.

While some deficiencies can cause yellow leaves, the primary culprit of red leaves is phosphorus.

The “P” in NPK, this nutrient is crucial for good blooms.

Too much can lead to potassium mineral-deficient soil, but too little will cause your geranium to pull resources from its leaves to maintain the blooms.

As a result, you’ll begin to see the veins of leaves turning red or brown.

A balanced fertilizer or one with half as much nitrogen is usually best, especially for container specimens.

However, performing a soil test can let you know when you need more or less of a certain nutrient, so it’s always best to do one prior to planting so you can have the best fertilizer ratios for your plant.

Nitrogen can also cause red leaves in certain species and cultivars, although yellow is more common.

Nitrogen is responsible for the growth of leaves and stems, and it also helps regulate the soil pH.

Natural rainwater, organic compost, and coffee grounds can all help increase the soil nitrogen levels, although the latter actually feeds beneficial microorganisms that need nitrogen, not the plant itself (but these same microorganisms can take nitrogen from the soil if they don’t have a better source such as grounds).

And speaking of pH, this is a factor that can really affect your geraniums.

They like an acidic soil, but too much acidity is toxic.

All geraniums need to pH to be at least 5.8, with hardy geraniums (the actual geranium genus) liking a pH no higher than 6.3 and regal geraniums liking their pH to be no lower than 6.0.

If the pH goes above 6.5 (usually caused by low levels of nitrogen or organic matter in the soil), add in some compost.

If the pH has dipped to toxic levels, you will need to figure out the source.

Often flushing the soil will solve the problem, but you may need to transplant your geranium to fresh soil if the problem persists.

As red leaves from toxicity usually show after a month of malnutrition, it’s important to address the problem quickly to avoid permanent damage.

Finally, there’s a disease caused by Puccinia pelargonii-zonalis, that can redden leaves on zonal geraniums.

It creates white blisters on the undersides of leaves and yellow spots that turn red to brown on top of the leaves.

Combat it with a fungicide and/or neem soil soaks.

Unlike yellow leaves, red leaves can still photosynthesize to a small extent.

Prune them away as needed, but don’t get too aggressive, as the sudden loss of resources will actually shock the plant into turning even redder.