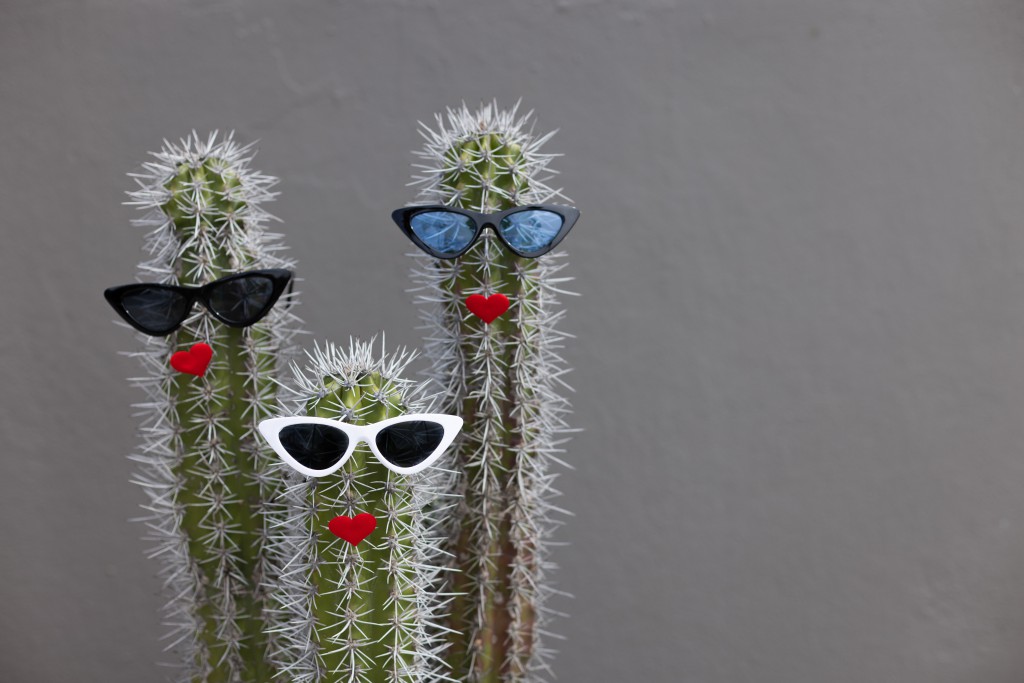 From meat-eating plant monsters like the Venus Fly Trap to collectible cacti, there’s a houseplant out there to spark the interest of every child plus a host of creative ways to display them which will engage their imaginations. Houseplants can be a way for children to express their individuality and enjoy a sense of accomplishment in owning, learning about and caring for, their own unique plant collections.

Of course, kids don’t have to have all the fun! The plants below also make great gifts for curious grown-ups who’ll appreciate something a bit more unusual on their kitchen windowsill!

Kids love a bit of gore, and the snapping jaws of a Venus Fly Trap closing on its hapless prey never fails to entertain. Described by Charles Darwin as ‘one of the most wonderful (plants) in the world’ the curious carnivorous behaviour of the Venus Fly Trap is still not entirely understood by science. This is definitely a plant to convince kids that botany isn’t boring.

The Venus Fly Trap may not be equipped with a brain, but there is intelligence ruling its appetite. This plant has evolved to thrive in a niche environment : acid bogs where there are barely any nutrients for plants to survive. Evolution has come up with an ingenious solution – dinner in the form of passing flies – no mean achievement for a piece of static vegetation. However, digestion is an exhausting business for the Venus Fly Trap, and they don’t want to waste a meal on nutrition-less particles of dust or raindrops. So, having lured its prey with the scent of super-sticky sundew, the flytrap doesn’t fully close its jaws until it can be sure that it has a juicy fly for dinner.

They do this by effectively counting and memorising electrical impulses. The inside surfaces of their trap-like leaves are lined with hinged trigger hairs known as ‘trichomes.’ When something lands in the trap, these trichomes are stimulated, communicating with and triggering adjacent trichomes. But the trap only snaps shut when the hairs are triggered again within a few seconds of the first strike, ensuring that a wriggling fly is on the menu. Just to be sure, the flytrap counts again, clocking up additional stimulations of the trigger hairs before starting to digest its hapless victim.

Flytraps can live for up to 20 or 30 years, so conscientious children who provide proper care can potentially enjoy this plant monster right through to adulthood!

Where to grow: Bright sunlight on a south facing window sill

Care: During the growing season stand the pot in about 1cm of rainwater. Don’t use tap water and don’t water from the top. During winter dormancy move your flytrap to a cooler place such as an unheated greenhouse. Keep the soil just damp and leave the plant to naturally die back into the rhizome. Trim off dead growth.

Feeding: Resist the temptation to constantly poke your flytrap as this will zap its energy. On sunny days you can stand it outside to catch flies by itself. Indoors, you can hand-feed this plant monster with dead or live insects. But don’t overdo it – once every week or two is sufficient. After the trap has closed tickle the trigger hairs with a cocktail stick or brush to fully seal the trap and stimulate the digestive process. Never feed your flytrap with fertilisers!

Next in the line-up for gruesome flesh-eating flora with kiddie-appeal are Pitcher Plants. An elaborate sequence of mission-impossible hurdles lies in wait for the victims of this monstrous botanical curiosity. A combination of scent and lurid colouring attract the attention of passing creepy crawlies. Seduced by the Pitcher Plant’s slippery, rosy lips, insects are lured onto its slimy rim by sweetly scented nectaries, only to lose their footing and slide down the inside of the pitcher where waxy deposits clog up their feet. At this point, downward-pointing hairs make retreat impossible and their fate is sealed. The insects tumble into an acidic soup of digestive juices at the bottom of the pitcher, their decomposition assisted by enterprising microscopic organisms which have adapted to live in this pool of deadly enzymes.

Whilst Sarracenia confine their appetites to terrestrial insects, some of the largest species of Nepenthes have much bigger appetites, occasionally dining out on rats, lizards and even small birds!

Care: Regular watering is essential but only use rainwater. During the growing season keep your Pitcher Plant wet all the time. Stand the plant in water up to third or half of the pot. Don’t let it dry out!

It is essential to allow your plants to rest during winter dormancy. In October/November growth should start to die off as temperatures and light levels drop. When growth stops move your plant to a cold, well ventilated location such as an unheated greenhouse, shed or cold frame. Reduce watering so the rhizome doesn’t rot but keep it just moist rather than wet. Remove dead growth. When new growth reappears in spring, move your pitcher back indoors into warmer conditions.

With their spikey foliage which resembles Octopus tentacles, Tillandsia are bound to arouse curiosity amongst children. Better still, Tillandsia don’t need soil. This opens up all sorts of creative possibilities for display which children can exploit. Hang them from the ceiling, wire them into shells, rocks and drift wood, place them in jars or terrariums…doubtless your kids will come up with all sorts of imaginative ideas. Air plants are cheap to buy and there are a number of different species to collect with subtle variations in the colour and shape of their spikey rosettes.

Tillandsia are epiphytes and so they have specialised but simple requirements. In their wild habitat they grow off the branches and trunks of host plants rather than in the ground. Their roots enjoy high aerial humidity, which is why they are perfect for terrariums and bathrooms. They have rather unique care needs to other houseplants, as they need bathing rather than conventional watering, but provided you follow the simple rules outlined below they are easy to care for.

Position: Somewhere with bright indirect light – a south-facing window with shade from the direct sun

Care: During the growing season, soak your Tillandsia in rainwater for 2-3hrs. After bathing, shake the plant off and angle it downwards so the water doesn’t collect in the crown. Mist occasionally. In the winter, bathe your Tillandsia once a month.

Feeding: Feed occasionally in the growing season by adding orchid fertiliser to its bath.

Cacti and succulents are perfect for children because they don’t take up much space on a bedroom windowsill, they are undemanding and will cope with neglect, plus they offer an endless range of funky shapes and colours which appeal to the ‘collecting’ instincts of children.

These are plants with plenty of personality, and children can quickly and cheaply amass a collection of their favourite characters, using their own homemade or DIY pots to display them. Any container will do as long as it has drainage holes: old teacups, tea pots, tins – basically whatever they can lay their hands on. Just be sure to puncture holes in the bottom with a nail and hammer or use a suitable drill bit.

They also lend themselves to creating mini gardens. Use a shallow, bowl-type dish and fill it up to 2/3 with broken crock and then top up the remaining 1/3 with cactus-compost. Plant up with cacti or succulents, dress with gravel and leave your kids to let their imagination run riot with models, figurines, shells, mini ponds and mountain ranges composed of rocks and pebbles.

Succulents are also brilliant candidates for easy propagation. Most will produce  ‘pups’ or offsets which are easy for kids to detach and pot up, growing them on into new plants to boost their collection or to give away to friends and family as gifts.

Care: Always grow in a very gritty medium such as proprietary cactus compost.

Both cacti and succulents are drought tolerant. During the warmest part of their growing season, they should be watered around once a week, allowing the top few inches of the soil to thoroughly dry out between waterings. Neither cacti or succulents should be left in standing water.

During winter dormancy, watering should be reduced and plants should not be fertilised.

Feeding: Feed occasionally with cactus and succulent fertiliser during the growing season.

Once cultivated as symbols of status and wealth by the aristocracy, children will enjoy proudly showing off their own home-grown pineapple on their bedroom windowsill. At maturity, Pineapples produce a flowering spike which bears over 100 spirally arranged flowers. The flowers swell into berries which eventually fuse together into one large pineapple fruit. This whole process normally takes 2-3 years but fortunately our Thompson & Morgan plants won’t tax a child’s patience that long as they already come with a mini developing pineapple!

Position: A bright South-facing windowsill, conservatory or heated greenhouse with a winter temperature of at least 16°C. In the summer you can move your pineapple into a south-facing position outside.

Care: Bear in mind that overwatering will cause your pineapple to rot so, in the growing season, allow the top few centimetres of the compost to dry out between waterings. During winter dormancy reduce watering and keep the compost barely moist.

Feeding: From spring to autumn feed every week with liquid houseplant fertiliser.

We hope you and your children have lots of fun growing houseplants together. For more inspiration, head over to our houseplants section.