Dying plants in your garden? Top tips on how to save them from the summer weather. 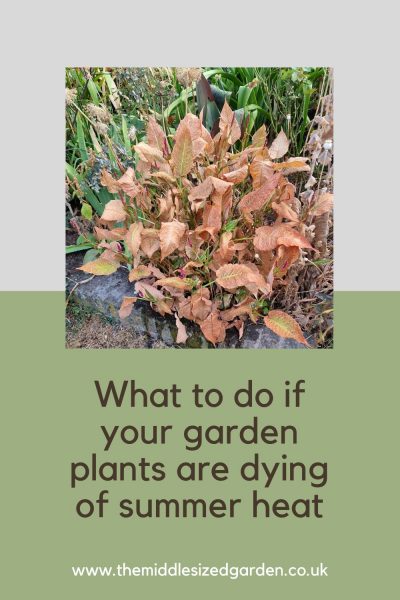 Dying plants in your garden? Top tips on how to save them from the summer weather.

Is your garden full of dying plants because of this summer’s extreme heat or drought?

My persicaria looks like a bowl of crisps, the Virginia creeper’s leaves are limp, the veronicastrum is flagging and many leaves have brown tips.

So what can we do? I decided to ask an expert.

I visited the beautiful Grade 2* Listed Borde Hall Gardens in Sussex to talk to their head of horticulture, Harry Baldwin. Borde Hill Gardens has several collections of rare plants, including over 80 ‘champion trees’ and beautiful borders, the latest of which is designed by Chris Beardshaw. 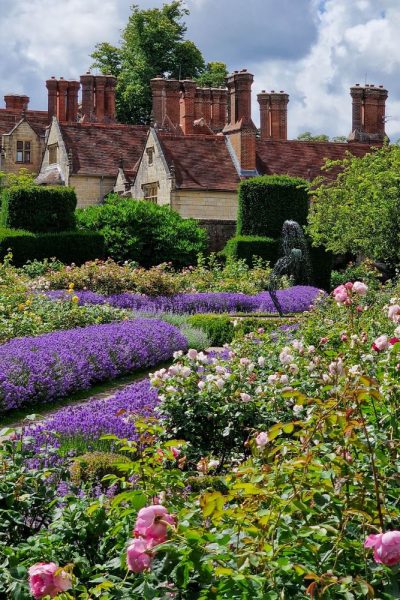 Borde Hill’s beautiful rose garden. The garden is open to the public from February to November, so it has to look good all year round.

Re-think the garden to stop next year’s plants dying

Firstly, Harry suggests you look at what is in your border and why it’s suffering. ‘Right plant, right place’ is gardening’s best known saying, but in these weather extremes the right place for your plant may be changing.

Sunny parts of the border dry out faster than areas with some shade. So don’t just look at whether plants prefer sun or shade. Look at how drought resistant they are, too.

Protecting your plants from summer heatwaves or droughts starts in the autumn and winter. Harry says that if you cover your borders with a deep layer of mulch (garden compost, mushroom compost or well rotted garden manure), then it will survive the extreme weather better. 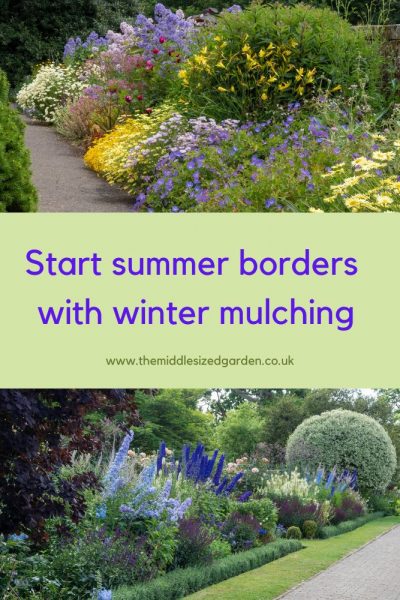 These borders at Borde Hill are protected by applying mulch in autumn, winter or spring.

‘But don’t use too much fertiliser or water too much in the spring,’ he advises. If plants have too much nutrition or water, then they can get leggy and this means there is more plant needing more water. Being a little mean to them in spring will build resilient plants, which will mean they survive a tough summer better.

Don’t try to re-plant struggling plants in the summer

If you see a plant dying because it’s clearly in the wrong place, it may be tempting to dig it up and re-plant it somewhere more appropriate. However, Harry suggests you hold back as summer is not a good time to re-plant plants. They may struggle to survive, even in an appropriate spot.

Harry suggests that you water the struggling plant regularly, then re-plant it in the autumn.

Or, if you want to keep it in the same spot, try to give it more shade by planting, for example, a deciduous tree near it.

If a plant continues to struggle in a position, even if you’re watering it, then Harry suggests putting it in a pot for the rest of the summer, then re-planting in the autumn.

Value the shade in your garden

A shady area is often considered a ‘problem’ in gardening. But in a hot dry summer, shade is a bonus.

At the moment, all the plants on the shady side of my garden look fine. The sunny border is full of dying plants and brown foliage.

Harry says you could increase shade by planting a tree. A deciduous tree will allow filtered light to come through, and it also loses its leaves in winter, so sun-loving spring bulbs can be planted nearby. (See this post for more about where to plant spring bulbs).

For example, there’s a group of Hydrangea paniculata ‘Vanilla Fraise’ at Borde Hill. They haven’t watered it at all this summer, but it was looking fresh and bright when I visited. Hydrangeas are usually the first plants to need watering, but there is a large group of trees nearby protecting these hydrangeas.

‘Hydrangeas originated as plants that grow under a low forest canopy, which doesn’t have much sunlight. So it’s good to think about how your plants grow in the wild,’ says Harry.

Do you need to water trees in hot weather?

Harry says that he doesn’t water mature trees in very hot weather, because their roots are probably far enough down to access water. 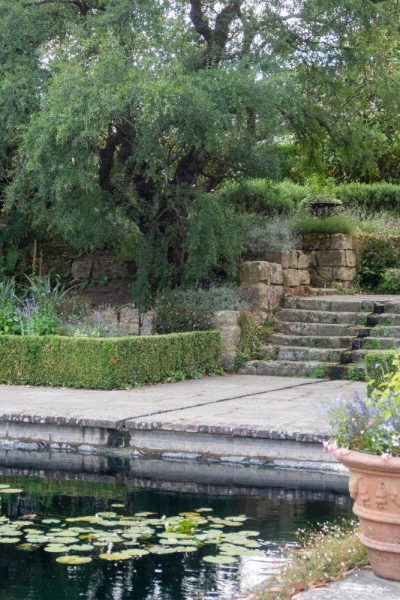 There are around 80 ‘champion trees’ at Borde Hill, measured by the Royal Forestry Society for the Tree Register. They are the largest, oldest or rarest of their species in the UK. Harry doesn’t water these mature trees, however, as their roots are deep in the ground. This is a Champion Tree – a discaria from Chile.

But you need to water newly planted trees thoroughly at least once a week in their first three or four growing seasons, whatever the weather. Their roots won’t be established enough to access the water.

However, in this extreme summer, he has also watered some trees that were planted 7-10 years ago. This wouldn’t normally be necessary, but in an extreme heat wave or drought, you need to keep a check on trees that would normally be fine without watering.

Harry recommends a ‘tree circle’ to help with moisture retention, both for established trees and newly planted ones. A tree circle is where you remove all grass, weeds or other plants in a circle around the tree, to the diameter of the tree’s crown. Cover the area with a bark mulch or similar. This stops weeds and grass competing with the tree for nutrition and also helps keep moisture in. ‘If you plant two trees in the same garden, one with a tree circle and one without,’ he says. ‘I guarantee that the one with the tree circle will grow better.’

There’s more advice on how to plant a tree here – from award-winning plantsman Jamie Butterworth.

Should you cut back dead or dying parts of a plant?

Trees can suddenly lose branches in summer, so if there’s any risk of a branch dropping on a path or causing an injury, then it’s sensible to cut it back if it looks as if it’s dying.

When my persicaria went completely brown, I wondered if I should cut off the brown leaves. I didn’t. I simply watered the plant and it is now turning green again.

Should you water shrubs in a drought or heat wave?

Mature shrubs will probably survive, but if your shrubs look as if you’re suffering, Harry says that it’s particularly important to water the evergreens before they die completely.

Harry says that some deciduous trees and shrubs are able to lose leaves and go into a summer dormancy. They are usually able to recover once the heat or drought is over. You can give them some water, but otherwise leave them to recover.

However, if an evergreen shrub looks completely dead, there’s less chance that it can recover.

How to minimise watering in a drought or heat wave

If you mulch in winter, your borders will hold water better in summer.

If you have a very sunny spot, plant it with drought tolerant plants, not just plants which prefer full sun.

Water early in the morning or late in the evening. Don’t water the whole border or the lawn. 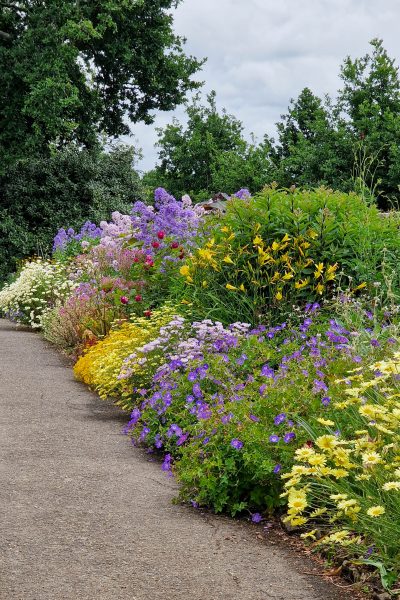 This border at Borde Hill was designed by Chris Beardshaw. During the heat wave, Harry’s team only watered some of the plants – there is a Catalpa purpurea that hasn’t needed watering at all, for example.

Direct the watering at the roots of the plants that need it. Don’t spray water around.

You can get something called a Gator bags, which you zip onto a tree. It will drip water slowly down to the roots over a period of days. I’ve decided to try this so I have bought two Treegator bags for my youngest trees. Note that Amazon links are affiliate, see disclosure.

Water rhododendrons, camellias and azaleas in very dry summers because they’re forming their buds for next year.

Don’t fertilise in a heat wave

It may be tempting to add fertiliser in a heat wave to give a plant a bit of something extra, but this can put it under more stress.

Harry advises fertilising in spring and autumn, not during the summer.

Pots only get the nutrients we give them, so they have to be fertilised during the growing season, and follow instructions for specific veg, too.

Harry says that plants with rhizomes and tubers are good at resisting drought, because they store so much of what they need in their rhizome.

These include irises, crocosmia, cannas and alstroemerias. (Once again, if you grow them in pots, you will need to water them regularly.)

I told Harry that my roses seemed to be doing well in this difficult heat. ‘Once roses have got their roots down, they can be very drought tolerant,’ he said. ‘And watering roses can create other problems, such as black spot or fungal diseases.’

Mediterranean plants, such as lavender, are also usually considered drought tolerant. ‘But this year our Lavender ‘Loddon Blue’  started to wilt during the heat wave, so we had to irrigate it,’ says Harry. 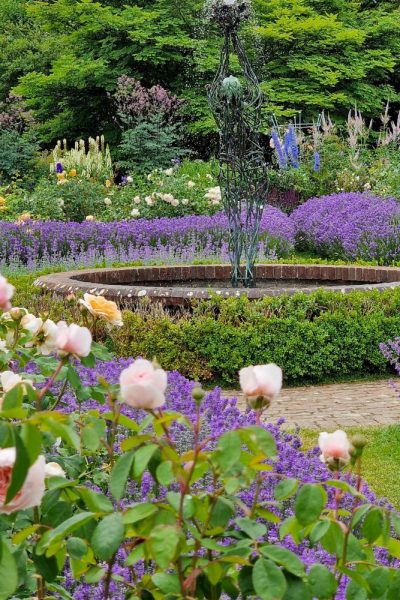 Lavender and roses in the Borde Hill rose garden. Roses and lavender are usually very drought tolerant plants, but this year the lavender did start to wilt. So keep a check on all plants not just the ones you know will need watering

So even if a plant is considered ‘drought tolerant’, it may need a little extra help.

Right plant, right place has a particularly rich history at Borde Hill. Col Stephenson Clarke bought the property in 1893, because it had a wide range of growing conditions (north and south facing slopes, different areas with different soils etc). He planned to grow an exceptional collection and variety of plants, and he sponsored several of great plant hunters of the day.

There is still a huge stack of letters and photographs, documenting these Victorian plant hunters and where they found the plants they brought back.  Harry says that knowing how a plant likes to grow in the wild is the best way to give it what it needs when it’s growing in your garden.  And at Borde Hill, he can sometimes actually read the letter about where the plant was originally found and then go to where the plant itself is planted in the garden. 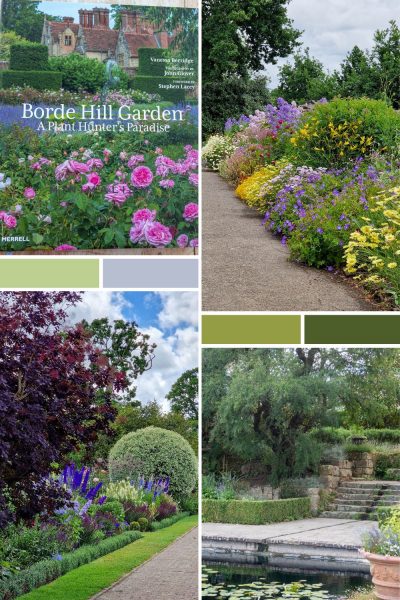 Borde Hill Garden’s rare plant collections date back to the days of the early plant hunters, several of whom were sponsored by Col Stephenson Clarke, who bought the property in Victorian times. They wrote him letters about the plants they found, and many of those plants are still in the garden today.

There’s a full history of the garden and some of Col Stephenson Clarke’s correspondence in Borde Hill Garden – A Plant Hunter’s Paradise by Vanessa Berridge.

Pin to remember how to save dying plants

And do join us for a free weekly email with gardening tips, ideas and inspiration.