Do Marigolds Attract Bees: Will Marigolds Keep Bees Away 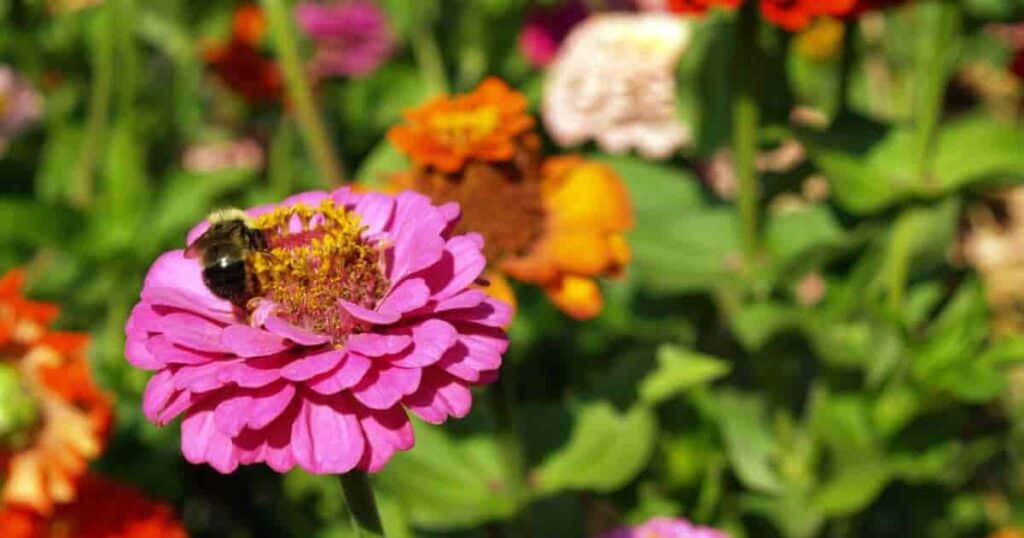 Do Marigolds Attract Bees: Will Marigolds Keep Bees Away

Marigolds (Calendula officinalis, the genus Tagetes, and a few unrelated species) are among the most popular “easy plants” out there.

These are often the first flowering plants children grow and can be found in window boxes and borders throughout their growing zone.

But did you know colorful marigold flowers are beneficial plants that can affect the bee population in your garden?

Do Marigolds Attract Bees, Or Will Marigolds Keep Bees Away?

Marigolds do attract pollinating bees and also have the ability to repel a lot of pests.

But how do these beneficial plants do it?

What Are Beneficial Plants?

Beneficial plants are any plant that provides benefits to a garden without the need to resort to artificial methods.

The three most famous categories of plants are:

Attractors are plants that attract beneficial insects or pollinators.

Repellors give off an odor that makes a lot of pest insects and even larger pests (up to and including deer) want to avoid the plant and those nearby.

Boosters are some of the least talked about.

These plants release chemicals into the soil that actually boost the growth of certain other plants, resulting in fuller growth and better blooms in the target plant.

How Are Marigolds A Beneficial Plant?

Marigolds have a lot of benefits for other plants.

They may smell fine to us, but for insects, they give off a very pungent stench.

This can result in chasing away a wide range of insect pests, such as aphids, mealybugs, and spider mites.

In addition, they repel some less-common pests, such as cabbage worms and hornworms, as the marigold’s scent helps mask the smell of the plants these critters are attracted to.

Marigolds even release chemicals into the ground, which are known to kill harmful species of nematode, such as the root-knot nematode.

On the flip side of the coin, marigolds attract pollinators such as honeybees and many other beneficial insects, including ladybugs and parasitic wasps.

How Do Marigolds Attract Honeybees?

One of the most common mistakes people make is believing that insects are attracted to the same things we are.

If this were the case, plants such as mint or rosemary would be swarming with pests attracted by their pleasant smell.

But that’s simply not the case.

In fact, bees use the ultraviolet light spectrum, meaning everything is a shade of grey, and anything with the visible color red is practically invisible to bees.

The good news is that bees can smell nectar, and how ultraviolet light is reflected off objects helps bees identify desirable plants.

Thus, even a red marigold will attract honeybees or butterflies if plenty of nectar is produced.

What Are The Best Marigolds For Attracting Bees?

Not all marigolds are created equal, and some species will undoubtedly be more attractive to pollinators than others.

In fact, one of the most potent marigolds isn’t even a true marigold.

The so-called corn marigold (Glebionis segetum) is a plant that produces flowers that look a bit like a marigold crossed with a daisy and are a former weed.

According to a study of the nectar and pollen rewards given by popular urban flowers, corn marigolds produced the highest amount of nectar and had a long bloom life but were number 6 in pollen production.

Meanwhile, the common marigold (Calendula officinalis) ranked number 4 for nectar and number 3 in pollen with a slightly shorter bloom life.

However, while these two marigolds were the only ones among the 13 flowers tested, other marigolds are still pretty impressive bee magnets.

You might have to plant a few extra to match the power of the two species mentioned above, but chances are, you won’t notice a significant difference.

But one thing to keep in mind is that planting only one or two marigolds won’t have much impact on your garden, and there are two planting tactics you should use.

Also, species with open flowers will attract more bees than those with dense flowers, making it harder for the bees to harvest them.

Planting For The Best Results

Marigolds are at their best in numbers, not only visually, but also in their effectiveness as a companion plant.

The most popular method is to use them as borders, creating a solid barrier of goodness around your vulnerable plants.

You may also choose to plant them with other beneficial border plants to create a bit of variety.

But there’s also a second common tactic that may work even better: interspersing.

Marigolds have a very shallow root system, allowing you to plant them very close to plants with deeper roots.

This method is great (as long as you still provide some border protection) because it encourages bees to venture deeper into your garden bed, increasing how many non-marigold plants they’ll visit in return.

Interspersing also provides some more visual appeal by giving tiny bursts of color throughout the garden.

As a little fun fact, complimentary gardening makes good use of root depths, to the point that a skilled complimentary gardener can grow a loaf of bread and other edibles) on a single acre of land without needing weeding, pesticides, or other labor – literally a set-it-and-forget-it garden!

What About Bees That Don’t Produce Honey?

We’ve talked in some detail about how marigolds attract pollinating bee species such as honeybees and bumblebees, but what about potentially unwanted bee species or wasps?

The answer here is less impressive.

Wasps and predatory bees aren’t interested in nectar and instead feed on proteins.

Marigolds are known to repel pests, meaning there’s not a lot of food for these predators.

So while ladybugs and predatory wasps are known to hang out near marigolds, most non-pollinating bees and wasps will simply ignore the marigolds and go about their business.

This may mean you see fewer of them flying around, but they’re not exactly being repelled either.