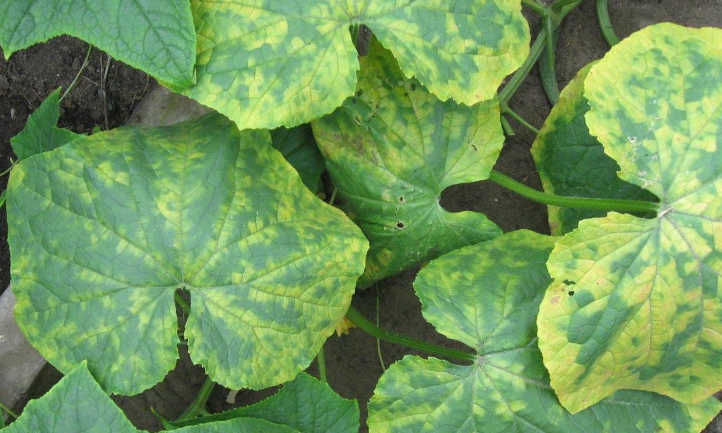 But that doesn’t mean you can’t prevent a CMV infection. You have the power to avoid bringing CMV strains into your garden. CMV infects healthy plants, but there are plants with virus resistance. And there are modes of controlling the variables commonly attributed to CMV.

What are the host species for CMV? What do symptoms look like – especially, the worst symptoms? Read on, and we’ll cover all we can on a CMV infection, and how to proceed when you notice one. We’ll also discuss the prevention of CMV altogether.

What Is Cucumber Mosaic Virus?

Cucumber mosaic virus (CMV) is one of the worst virus diseases that can strike a garden. Potentially infected plants should immediately be removed, set aside, and diagnosed by agents at an agricultural extension office. That’s because recently there has been extensive viral research on CMV isolates and products containing anti-viral properties that promote gene silencing. In this process, anti-viral compounds halt the removal of a plant cell’s protein coat and prevent replication.

Virus strains penetrate the plant cell. The virus’s coat protein is removed and its viral genome RNA is released into the plant’s cytoplasm. The virus then expresses two types of protein which produce replication proteins. Viral replication occurs in “factories” made of membrane vesicles. Another RNA genome is developed within and transcribed to provide even more RNA genomes. A sub-genomic RNA develops that produces more coat protein, and more virus transmission and formation occurs via virus movement protein in the plant cell.

Aphid populations (at least 75 different species) are the main culprit for spreading virus particles. As they feed on infected host plants, they pick up the virus within 1 minute and spread it as it remains in their stylus. Cucumber beetles are also a vector of cucumber mosaic viruses. After about 2 minutes, the ability of viral transmission declines significantly. Within two hours it’s almost impossible to spread CMV picked up by an insect who fed on an infected plant.

The most susceptible plants are young host plants. Because ants tend to harvest honeydew from aphids, they too are one of the main insect vectors of CMV. Controlling these insects in your garden can help you build CMV resistance from the get-go.

Another vector of CMV spread comes from mechanical means, via infected plant sap picked up in the wind or by infected pruning tools. The latter of these is why it’s so important to sanitize garden tools between uses. Because CMV isn’t a stable virus, it doesn’t spread as easily through mechanical means.

The infected seed also transmits CMV strains to plants. Growers plant the seed and learn they have an infected plant after they’ve done the work to start them. Finally, certain infected weeds can transmit the virus to other plants, especially those that vine around a garden bed via tendrils. Pigweed and wild amaranths are hosts for the virus, for instance. Keeping weeds out of the garden helps you prevent the spread, too.

It’s especially important to look out for CMV in environmental conditions where it can proliferate. The virus prefers temperatures between 70 and 85 degrees, which typically fall in spring and summer. That’s because these temperatures coincide with the peak of aphid reproductive cycles. If you want to understand CMV resistance, think about plant stress. Those times that are more stressful for plants are more stressful for CMV. High heat, especially causes a decrease in CMV incidence. Environmental conditions in temperate and tropical climates promote virus replication. Another condition that influences replication occurs when nights are much longer than days. This is when CMV symptoms are more evident.

Understanding the CMV disease cycle is the basis of identifying systemic infection. While symptoms vary depending on the plant species, a general understanding of the systemic symptoms is necessary. Within minutes cucumber mosaic disease makes its way to plant species via the methods listed in the last section. While young plants are most susceptible, it’s not until a few days after infection sets in that symptoms show. Sometimes symptoms take 2 weeks to manifest. Early-stage mosaic symptoms on a seedling involve yellowed and wilting cotyledons. Leaves become mottled and look wrinkled. Plant growth is slowed dramatically.

There are many symptoms that infected plants take on when they are experiencing CM virus infection. In mature plants, disease symptoms vary. Leaves take on a yellowish-green to deep green mottling or mosaic pattern. Vines become bunched in appearance as stem growth between leaves is stunted. Vines are yellow in their centers and fruit production slows. All the plant parts that grow after an infection become dwarfed, while plant parts that have not been susceptible to infection to that point grow normally.

On fruit, look out for the characteristic chlorotic mosaic pattern. Cucumbers become excessively warty and soft. They’re often too bitter to enjoy. More severe symptoms occur on different vegetable crops in different ways. Other cucurbits like musk melon and watermelon take on severe damage in the form of warts as well. Melon warts tend to be lighter in color than cucumber warts. Occasionally, watermelon develops necrotic local lesions that render the fruit inedible. Squash also develops warts that are light in color. How the exact symptoms appear depends greatly on the CMV strain in question.

On pepper plants, a CMV infection looks like stunted growth, mottling on leaves, and dropping foliage. Sometimes necrotic lines affect the leaves too. The bell pepper itself will sometimes look pale with sunken lesions. Some varieties of pepper exhibit ring spots. CMV-infected tomato plants become yellow and stunted in the early stages. Sometimes this is confused for tomato aspermy virus, another one of those many viruses that infect tomatoes. The most distinct symptom in a tomato plant is the shoestringing of tomato leaf blades. Similarly, potato mosaic virus is often confused for CMV. The most distinct symptom on potato plants is curled leaf ends, and a bushy overall appearance.

CMV affects legumes as well and is often confused with bean common mosaic virus or peanut stunt virus. To tell them apart, look for an agricultural extension office that can assist you in diagnosis. Characteristically, CMV infected beans have mottled leaves and a zipperlike roughness along leaf veins. Bean pod production is greatly decreased, and flowers are aborted before they can pollinate.

In general, broadleaf plants display typical mottling, leaf-curling, and defoliation associated with CMV. Some develop rings, some have spots, and some develop necrotic lesions shaped like oak leaves. Mottling appears in the longitudinal veins of grass blades. In later stages, grasses will acquire round, yellow-ringed lesions with a dark center.

Because CMV affects over 1200 species of plants, we’ve put together a list of some of the most prominent hosts. That way, you can protect plants that are nearby from infections.

This list is extensive, but not complete. Do some cucumber mosaic virus research to determine if a plant species you’re growing has CMV resistance or not.

Once a species is infected with CMV, you must remove the entire plant and either quarantine it in a sealed plastic bag while you await diagnosis, or throw it away. Do not compost affected plants as they could spread the virus to other materials in the pile. There are no chemicals that treat or cure the disease, and with such a wide host range, the best way to control CMV is prevention through cultural methods, seed treatments, and planting virus-resistant varieties.

Through integrated pest management (IPM) practices, you can prevent CMV from getting a foothold in your garden. Control aphids and aphid vectors like ants, and you’re well on your way. Neem oil is a great organic option for aphid infestations in cooler to temperate weather. Spray a diluted commercial formula on your plants as a preventative or to treat aphids. Insecticidal soap is another useful organic method of controlling pesky aphid infestations.

Avoid spraying during the flowering phase and in high heat. Heat either burns the plant covered in neem or simply evaporates the treatment altogether. Lacewings, ladybugs, and birds love to eat aphids. Release them in your garden or encourage them with certain plants and food. You can also remove aphids by hand, or wipe them off plants with a rag dipped in soapy water. Or, use companion planting to attract beneficial insects.

There are cultural practices that assist in preventing CMV. The basis of this involves visiting your garden regularly to ensure no disease is present. Remove weeds as they crop up in your garden beds. Eliminate debris that falls onto the soil.

Because CMV is so prevalent, a lot of research has been done to engineer plants with partial resistance to full resistance. Planting resistant cultivars is a great way to prevent the disease. When it comes to tomatoes, you may be hard-pressed to find a variety that is CMV resistant. However, some varieties have been developed for resistance to other viral diseases, like tobacco mosaic virus. These cultivars sometimes have disease resistance to CMV as well.

Overfertilization of plants can attract aphid species. So can dry soils. Keep plants well-watered and you’ll prevent the viral protein coat opening associated with CMV. Because seeds can carry and transfer the disease to a garden, always purchase from reputable sources. If you’ve purchased seeds from a smaller company that doesn’t have the resources a large distributor would treat the seeds to prevent any potential infections. The same goes for seeds you got from a seed swap or a friend. Simply soak the seeds in a solution of water and 10% bleach solution for 15 minutes in a mason jar. If bleach isn’t your style, use 20% apple cider vinegar. Then rinse the seeds thoroughly with cool water to ready them for planting.

A hot water seed treatment is also an effective way to prevent CMV. Wrap your seeds in a cheesecloth or a coffee filter. Soak the wrap in water heated to 120 degrees Fahrenheit for 20 to 30 minutes. Then immerse the wrap in cold water for 5 minutes. One great way to avoid infection is to never plant seeds from an infected plant.

Q: How do I get rid of cucumber mosaic virus?

A: Unfortunately, there is no cure. The best control is preventing aphids on your crops, which spread CMV.

Q: Can you eat cucumbers with mosaic virus?

A: You can, but you probably don’t want to consume them. At this point, they’re intensely bitter and sometimes mushy.

A: Yes, they can. All nightshades can contract CMV.