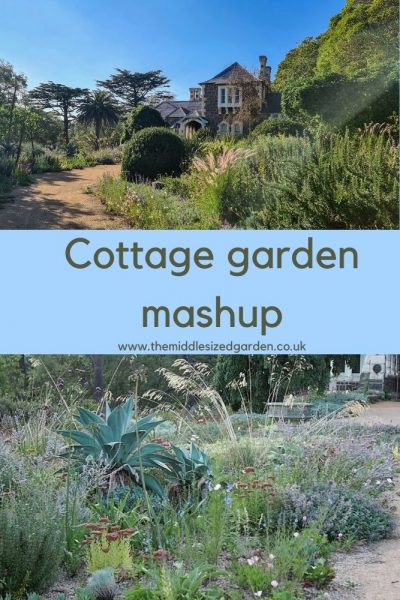 A cottage garden mashup means taking the elements of English cottage garden style and mixing it with your own local plants to create a garden that’s unique to you.

I first heard the term from Bill Bampton of the Diggers Club, who used it to describe their Heronswood garden

He is the head gardener at Heronswood, a garden originally created by Diggers Club founders Clive and Penny Blazey on the Southern Australian Mornington Peninsula. They were inspired by the English cottage garden look and also aimed to preserve heritage flowers, plants and vegetables. 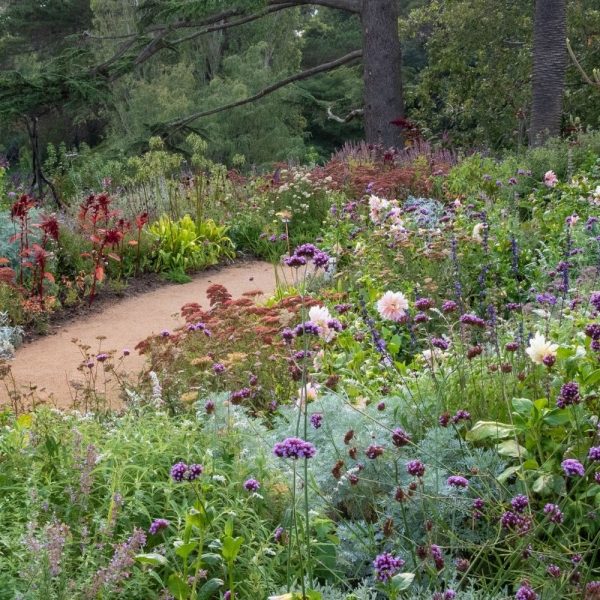 Beautiful cottage garden borders at Heronswood – you can make the cottage garden look work even if your climate or site isn’t apparently suitable. And these are plants which need minimal watering and pampering too.

But the site of Heronswood is quite harsh for some plants. It’s on a slope, with stunning views over the bay, sandy soil and salty winds. ‘Plants like foxgloves struggle to survive,’ says Bill.

The solution is what Bill calls ‘a cottage garden mashup.’ 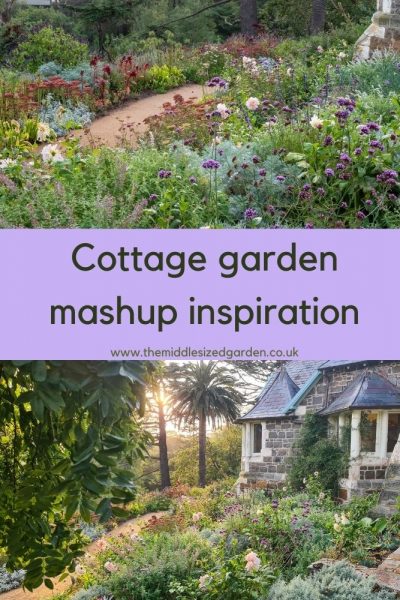 Mashup is defined in the Oxford Dictionary as a ‘fusion of disparate elements.’ It’s become fashionable in music and film, where two different musical tracks can be blended together to create a new work. The same principle works in gardening. 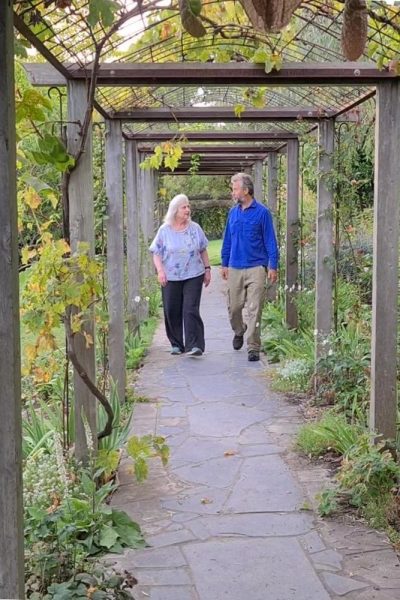 Bill Bampton showing me round Heronswood, the home of the Diggers Club in Australia.

Start with your site

‘Right plant, right place’ is, of course, the most important gardening rule there is. Plants that are happy growing in your garden will look better, last longer and need less care.

But the Heronswood site wasn’t necessarily ideal for the cottage garden look. The slope meant that the soil was even dryer than it usually is for Australia. And the sandy soil doesn’t hold nutrients as well as other soils. Plus there are the winds to content with. 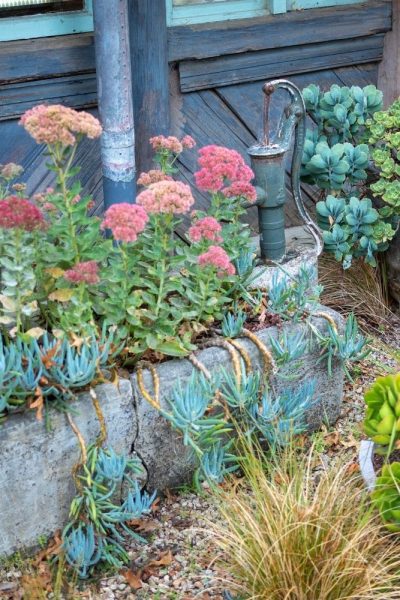 An old trough and pump, in front of a weatherboard clad cottage – this has a cottage garden feel, but uses mainly local plants. Although Sedum (now Hylotelephium) ‘Autumn Joy’ is a top cottage garden plant in the UK too.

So many typical cottage garden plants may not thrive. ‘You have to give up your some of your dreams,’ advises Bill. ‘But, if you think about it, you can have what your site wants and what you want.’

Think about what shape or function the plant has

The answer, Bill says, is not to be too fixated on which plants you use. ‘Think about what plant might have the shape of a foxglove. What would be like a foxglove? What has a form like a hollyhock?’

For example, many Mediterranean plants grow on rocky hillsides, so can cope with wind and poor soil. These include many plants used in cottage gardens today, such as rosemary, salvias and lavender. 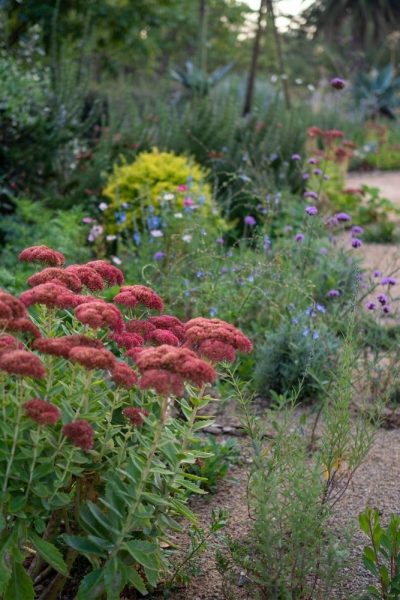 In Heronswood’s ‘driveway garden’, they use traditional cottage garden plants, but they need to be tough and drought-resistant. Sedum (now Hylotelephium) ‘Autumn Joy with Salvia and Evening Primrose.

If you too have a sloping garden, you may find how to plant on a slope helpful.

Bill suggests you let go of your ideas of what a cottage garden plant should be.

For example, succulents grow well at Heronswood, because the winters are mild (av temp 10C/50F) and there are very few frosts. ‘Succulents have structure and evergreen foliage. So they can equate to your topiary or your shrubs,’ he says. ‘Forget about their usual associations.’ 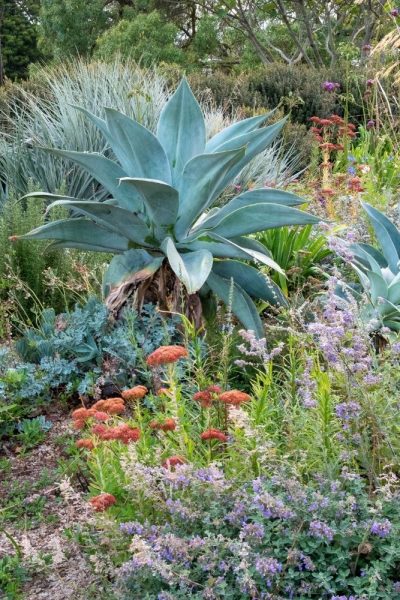 Think about what the plant does for the border – agaves offer structure and evergreen foliage when combined with cottage garden favourites, such as nepeta. Some are also very cold hardy (down to minus 28C/minus 20F), although they need a dry climate or well drained soil.

At Heronswood, they’ve created some unusual combinations, such as cosmos with agave succulents.

And Sedum (now Hylotelephium) ‘Autumn Joy’, Evening Primrose and Salvia ‘Mystic Spires’ are all very appropriate cottage garden plants. But at Heronswood, they’re combined with the distinctive star shapes of Agave ‘Blue Nova’ and the spiky Puya instead of box or other clipped topiary. Definitely a cottage garden mashup! 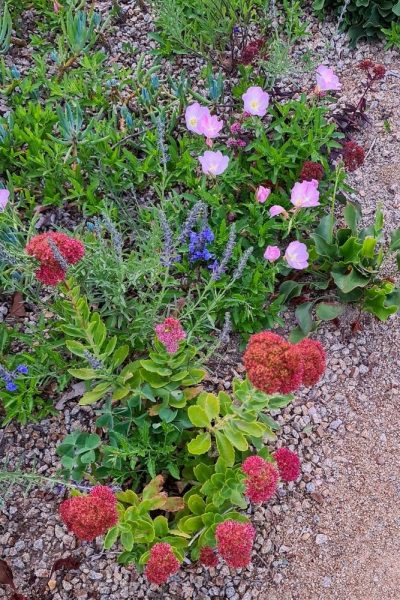 Think about plant care (and the climate!)

One of the principles of cottage garden style is that plants should be easy to look after. Heronswood is in an area of low rainfall, and Bill says that they have done a lot of research on plants that need minimal irrigation while keeping the cottage garden feel. 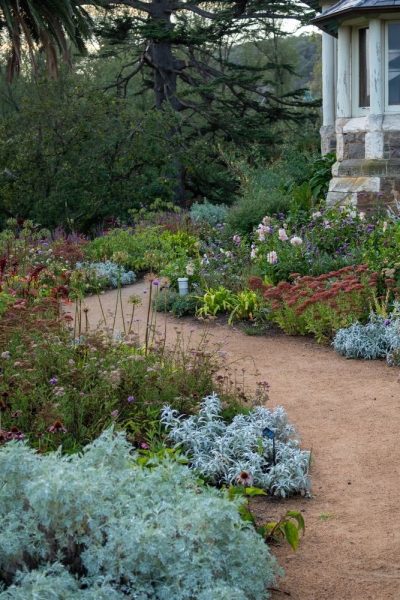 The cottage garden borders at Heronswood. Many of the garden favourites originally came from Mediterranean hillsides so can cope with drought, wind and poor soil.

They even sell plants in the Diggers Club nursery, with labels saying they need ‘one drip’ of irrigation or two.

‘Cottage garden mashup’ plants that need very little water include the succulents and sea lavender, as well the more traditional cottage garden plants, such as nepeta, artemisia and perovskia, all of which are drought tolerant.

Your own cottage garden mashup will be unique

If you combine plants that grow locally with cottage garden principles, you’ll end up with a garden that’s unique to you and your style, says Bill. ‘In the modern world, gardens are becoming homogenised as we become more globalised.’

What makes your garden unique is the soil, the climate and the culture. So accommodating that within a cottage garden style will make yours different. 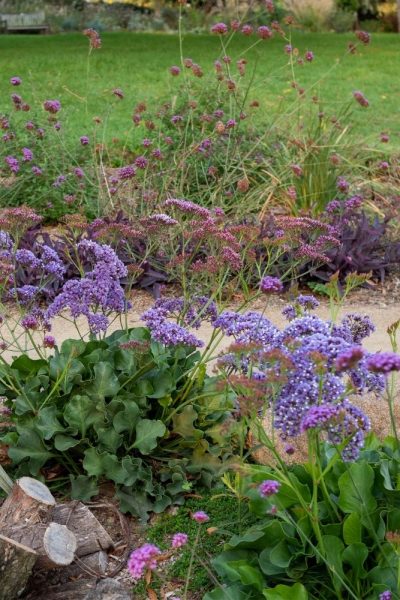 Perez’s Sea lavender or Limonium perezii is a tough, evergreen perennial, but has cottage garden prettiness. It tolerates wind,drought, heat and salty air, but won’t survive frost, so would need to be replanted every year in most UK gardens.

If you’re looking for plants that will do well in your conditions, think about how they grow in the wild, says Bill. ‘It’s the Beth Chatto approach.’ (If you live in a dry area, see our post on how to create a dry garden with the head gardener of the Beth Chatto Gardens.)

Bill’s approach to composing a cottage garden feel is ‘grounds, mounds and astounds.’ That means ground cover plants, mounds of colour or structure and then adding in eye-catching ‘wow factor’ plants.

These can be unexpected or even unintended. A vibrant ruby self-seeded amaranth popped up in their largely pastels cottage garden border.  And a colourful petunia self-seeded itself elsewhere. 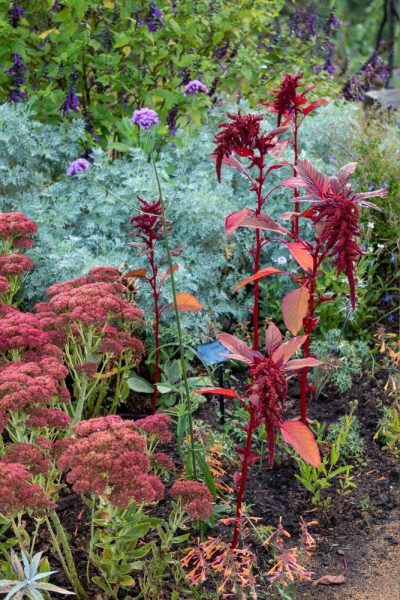 Bill and his team embrace these self-seeders because they’re a key ingredient in a cottage garden mashup, adding colour and seasonality.

Why cottage gardens and The Diggers Club

The Diggers Club was started forty years ago because Clive and Penny Blazey felt that gardeners were losing the old fashioned cottage garden plants and heritage vegetables. ‘All the old garden favourites were being thrown out in favour of the newest model.’

Garden centres were dominated by a smaller selection of plants that had been bred recently but weren’t necessarily better, so choice was being lost. It’s a common problem around the world, but because Australia has a smaller population density than, for example, Britain, there’s less opportunity for small independent nurseries to fill gaps in demand.

The Diggers Club started as a small seed company in Melbourne, aiming to safeguard heirloom seeds. They then moved out to Heronswood, and now run several other gardens around Australia. ‘The garden here very much reflects the experimental nature of how The Diggers Club developed,’ says Bill. The Blazeys started out with cottage gardens, but were then inspired by the British sitcom The Good Life so the mission deepened to food growing, too. 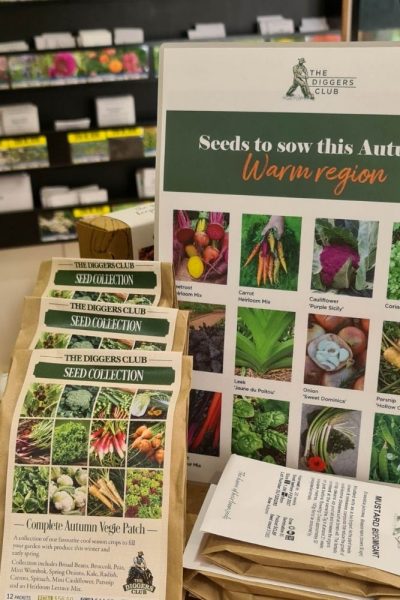 Heirloom seeds for sale in the Diggers Club shop.

The move to Heronswood – and the subsequent gardens – also gave The Diggers Club the chance to grow and sell plants in a garden context. So many plants these days are sold because they look good in pots, says Bill. Having a garden attached to the nursery means that people can see how the plants would look growing in their garden.

A home-made look with hard landscaping

Heronswood has relatively little hard landscaping. It has a deliberately home made feel. Instead of commissioning professional landscapers, Bill and his team make their own banks, paths and benches. They’re made from materials that are left over or lying around. ‘We try to do things people can do in their own home,’ he says. 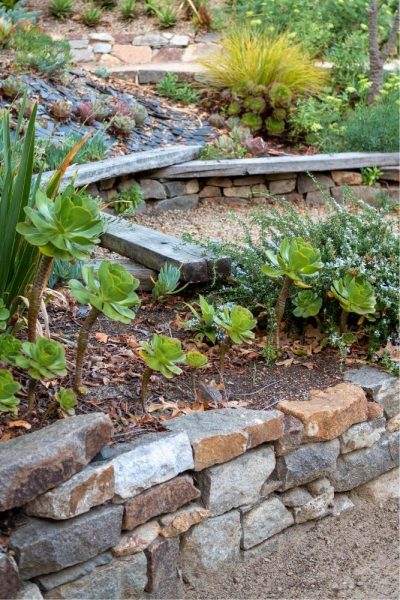 This bench and retaining wall was made from local stone and re-used wooden planks.

‘Horticulture is getting very professionalised. It’s taken the DIY message away from gardening. So we use metal pickets that you can buy in any agricultural store, and home-made willow supports.’ 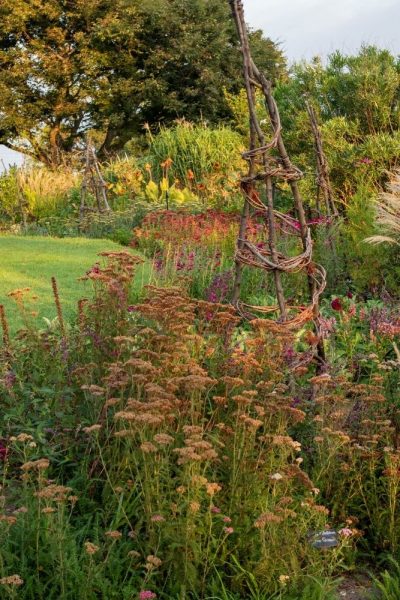 For a cottage garden mashup, use hand made or homemade items made from local materials, such as this willow teepee. There is an emphasis on making things at Heronswood rather than getting in expert help.

There are some really beautiful borders and plantings at Heronswood. You can see much more of them in the Cottage Garden Mashup video here. 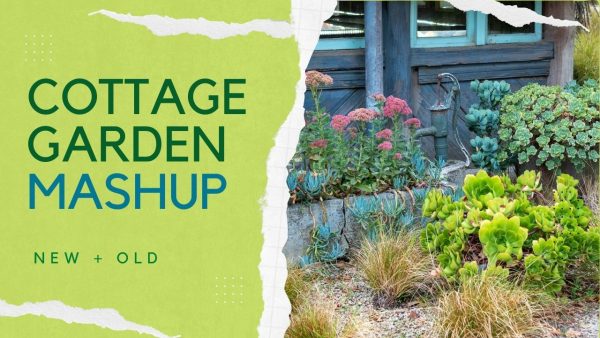 There are some good books on cottage garden style, such as The Modern Cottage Garden, The Fresh Approach to A Classic Style by Greg Loades. There’s lots of visual inspiration and tips in Cottage Gardens by Claire Massett. Note that links to Amazon are affiliate, see disclosure.

In the UK Garden Organic runs a heritage seed club for preserving varieties of seeds that have been dropped from commercial sale. And Plant Heritage is a charity that conserves cultivated garden plants.

In the United States, Seed Savers aims to preserve and supply America’s heritage food crops. For heirloom seeds and plants in Australia, see The Diggers Club.

And do join us for a free weekly email with tips, ideas and inspiration for your garden.