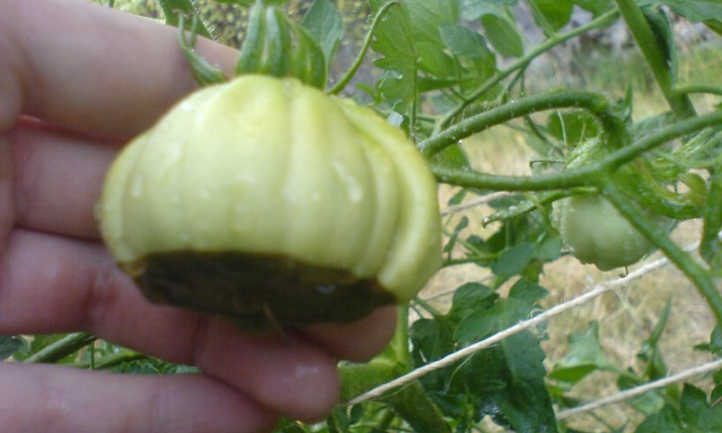 I had the pleasure of helping some friends set up their first no-dig garden this summer. Around half of their growing space was allocated to tomatoes, a favorite summer treat. My friends would send me frequent update photos of the progress as they were eagerly awaiting to taste their first tomato. One day in mid-summer, I received a frantic text that something’s wrong. The first green tomatoes were all developing dark brown spots on the bottom! From the photos that my friends shared, I immediately saw the problem:  blossom end rot.

Blossom end rot (BER) is such a discouraging sign for novice and seasoned gardeners alike. Unlike many other issues found in the garden, this affliction is not caused by pests or disease and can be reversible. Blossom end rot affects many plants and most commonly impacts tomatoes, peppers, eggplants, and melons.

Many gardeners believe that BER is an issue caused by a calcium deficiency in plants. However, there are various factors that contribute to why a plant may not be effectively uptaking calcium. My friend’s garden story had a happy ending as we were able to identify and remedy the issue immediately so they only had a few casualties early in the growing season. In this post, we will go over the causes of blossom end rot, how to address the issue at the onset, and ultimately, how to prevent BER from occurring in the first place.

What Is Blossom End Rot?

Blossom end rot is a physiological disorder that occurs in some fruiting plants when the plants are under a specific set of stressors. It affects the immature and developing fruits of many commonly-grown vegetables. BER is characterized by cell death at the blossom end or bottom of the fruit. This may lead to the partial blackening and drying of the fruit and a visible brown lesion. It’s devastating for both home gardeners and commercial growers since this disease renders the affected fruit inedible.

For fruits of solanaceous plants (tomatoes, eggplants, etc.), blossom end rot first appears as water-soaked spots at the bottom of the developing fruit. Blossom end rot can start two weeks after the fruit set and commonly affects the first fruits formed on the plant. On pepper plants, the spot may also start on the side of the fruit. Eventually, the spot enlarges and the fruit will become more susceptible to additional insect, fungal and bacterial damages. Blossom end rot shows a similar progression in cucurbits such as cucumbers, squash, and watermelon.

Blossom end rot symptoms manifest in the telltale signs of blackened, shrunken, and leathery appearance at the bottom of fruits. It could even spread to half the fruit. Typically, multiple fruits of the same plant will all show symptoms because it’s a condition that affects the entire plant. For cucurbits such as melons and squash, blossom end rot may look similar to a natural termination of an unpollinated female blossom. BER may be confused with sun-scald but sun-scald typically manifests as a pale leathery patch on tomatoes and peppers where the fruits are most exposed to the sun.

Most scientific studies have identified calcium deficiencies in plants as the main cause of BER. Calcium is an essential nutrient in plants and plays a key role in regulating plasma membrane function and cell wall structure. However, studies have shown that blossom end rot can occur even under controlled growing conditions with sufficient calcium in the soil. This leads researchers to believe that the cause of blossom end rot is not just from insufficient calcium in the growing environment, but also an issue of calcium transport and transpiration by the plant. Adding more calcium to the soil is by no means the best course of action!

Irregular watering is one of the most common causes of blossom end rot. Most vegetables are not great at coping with drought stress. Since calcium is a water-soluble nutrient, the transport of calcium throughout the plant relies on the plant being able to uptake water at regular intervals through consistent soil moisture.

An imbalance in soil pH can render the calcium not soluble and thus not available to the plants.

Applying too much fertilizer, especially too much nitrogen, can also inhibit the uptake of calcium by the plant; this may even include an excess of calcium itself! Too much nitrogen promotes rapid leaf and vine development which may lead to a calcium deficiency in the developing fruits.

Having high salt levels in the soils either from salt run-off, being situated in a coastal region, or having salt forms of fertilizer, can also inhibit calcium intake. Last but not least, plant transport starts with the plant’s roots.

Root damage can result in poor nutrient intake and lead to an overall deficiency in the plant.

BER is reversible if caught early in the growing season. Not all is lost! Tomato plants, for example, can be heavy producers that yield many fruits throughout the growing season and it’s nearly inevitable that you will lose some to various factors.

After you spot the signs of blossom end rot on your fruits, you should immediately pick the affected fruits off to prevent the plant from wasting energy on ripening these fruits. Then, look at your watering schedule and adjust to make sure that you maintain consistent soil moisture. Mulch around your plants to help conserve moisture. Gardeners may find having drip irrigation helpful to stay on top of watering. If you conclude that watering is not an issue, move on to perform a soil test to check for the other possible causes of BER. For the most part, you will find that there is sufficient calcium, but the soil test may uncover other issues such as soil acidity, over-fertilization, or soil salinity.

If you know BER is an issue in your garden, it might be worthwhile to get your soil tested periodically to assess the soil pH and nutrients. Generally, top dressing with a layer of compost can sufficiently replenish your soil nutrients so you don’t need to add unnecessary chemicals like Epsom salt, calcium chloride, or calcium nitrate to your soil. Adding crumbled egg shells to your soil is another one of these folk remedies that has little scientific basis as the calcium in the shells is not immediately available to plants. Similarly, a crushed-up antacid tablet won’t fix the issue, despite all the claims that it will; it suffers the same issue as crumbled eggshell does.

Since roots are essential to plant health, make sure that the plants have a healthy and developed root system. For tomato plants, for example, you can encourage more root growth by burying seedlings deeply at the beginning of your growing season. If there is root damage due to fungal disease or pest pressure, practice crop rotation or plant a resistant cultivar to remediate the issue

Aside from managing root health, soil health, and moisture stress, another way to avoid blossom end rot is to pick fruit or vegetable cultivars that are more tolerant to calcium deficiencies. For example, plum and pear-shaped tomatoes are more susceptible than round or cherry tomatoes. Tolerant tomato cultivars such as the Celebrity, Jet Star, and Early Girl are readily available at garden centers. For peppers, you can try out shorter and rounder varieties over longer slender types.

A: Yes, BER can be reversed on a plant and its future fruits but it cannot be reversed for the fruits that already have BER. These affected fruits should be picked so the plant can focus its energy on producing new, healthy fruits.

A: Overwatering can lead to BER if excess water causes the plant’s roots to rot. Damaged roots are not able to update water and other soluble nutrients as effectively, which can result in BER among many other issues and even plant death.

A: Adding Epsom salt to the soil or as a spray will not help with blossom end rot and may even exacerbate the issue. Epsom salt is made up of magnesium sulfate (magnesium, sulfur, and oxygen) and does not contain any calcium. Therefore, Epsom salt can not address calcium deficiency in the plant.