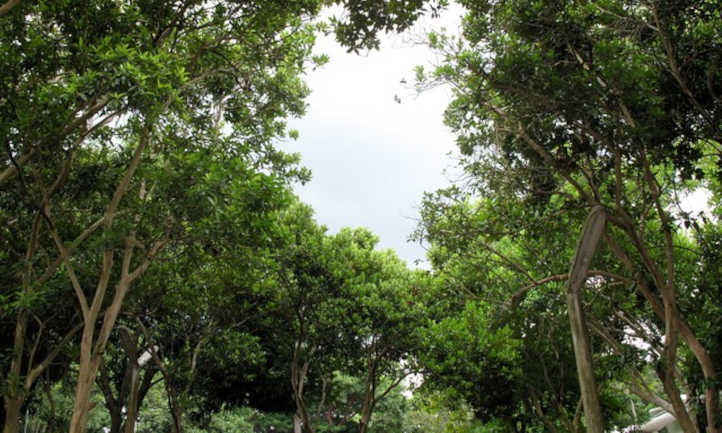 The allspice tree is a lovely tree on its own and provides dried berries that make everyone’s favorite fall flavor: allspice. The tree is the only spice crop grown exclusively in the western hemisphere, and provided you have the right conditions you can grow it at home too!

Allspice originates in Central America, South America, and the Caribbean. In these tropical areas, growers cultivate regional allspice trees that have distinct flavors. Each region has specific culinary uses for dried berries, and the result is an aromatic cuisine that is unforgettable.

So what do allspice trees need to thrive? And how can home growers outside its tropical range help their trees produce berries and harvest them? Keep reading, and we’ll cover all these things, and more… like where the name allspice comes from.

All About The Allspice Tree

The allspice tree (Pimenta dioica) is commonly referred to as  Jamaican pepper, myrtle pepper, pimenta, pimento,  pimenta gorda, Jamaican allspice, Mexican allspice, and Guatemalan allspice. It was first cultivated by Maya and Aztec people in Central America, circa 2600 BC and 1250 AD, respectively. The name allspice came about because the flavor of the dried berries is similar to cloves, cinnamon, and nutmeg. There is only one species of allspice in the world.

Pimenta dioica is a tropical, ornamental, evergreen shrub in the myrtle family that grows up to 59 feet tall. The tree’s bark is white-grey and peels in sheets like that of birch trees. The root system is deep and spreads wide. Allspice leaves are dark green, oblong, and leathery, and they are high in aromatic content. In mid-summer, the trees grow small white flowers on pyramidal stems that produce pea-sized green berries.

Allspice trees are either male or female, and growers should encourage cross-pollination to produce berries. These clustered berries are removed when they’re still green for access to the delicious allspice flavor. They are then sun-dried on concrete until they are dark red and ground into allspice. It takes roughly 3 to 5 months for berries to form after the trees are pollinated.

Allspice trees are native to Central America and the West Indies, specifically Jamaica, Mexico, Belize, Guatemala, Honduras, Brazil, and Leeward Isle. Allspice was historically used to preserve meats in the Caribbean, specifically Jamaica.  It’s cultivated as a key ingredient in jerk seasoning, barbecues, curries, and stews. The spice is also popular in German and British cooking. It’s combined with nutmeg to make pumpkin pie spice in the US.

The allspice tree leaves are used with smoked meats to provide a woodier, less intense flavor and aroma. The leaves lose flavor within a couple of days. Therefore they must be harvested and used right away. Cooking with allspice and a combination of other dried spices can fill your kitchen with a pungent aroma that you’ll seek out often.

To encourage cross-pollination, acquire two allspice saplings – one male, one female – from a nursery. In tropical areas in early fall after the first rain, find a spot in your garden that has loose, well-draining soil. Ensure there area gets full sunlight for at least 40% of the day, but shade the trees in the late afternoon. Space them at least 30 feet apart, or grow allspice in containers. Grow allspice in a clay container to keep the root system healthy. Plant new trees out of cold and wind.

If you live in tropical areas, grow trees in the ground. Dig a hole 2 times wider than each tree’s root ball, and just slightly deeper than the nursery pot. Remove them from the nursery pot, and place their root system in the hole. Then add water, filling the hole slightly. Finally, add well-moistened soil and mound it up around the base of the trees. Spread mulch as the base of your pimenta plant.

Once each tree is planted, you’re on your way to using allspice plants for various culinary uses. Let’s discuss the basic care techniques for this plant in the myrtle family, so you can enjoy it in your garden and your kitchen.

Allspice needs full sunlight to partial shade, with at least 6 hours of full morning light per day. Established trees will do just fine in shadier spots, but young trees need full daytime sun. Hard afternoon light can singe the foliage, so be sure to shade the tree in the afternoon. Allspice is hardy in zones 10 and 11, where temperature ranges do not dip below 40 degrees Fahrenheit often. Established trees will survive snap freezes down to 26 degrees. In areas outside its hardiness range, grow the trees in containers and bring them in or put them in a climate-controlled greenhouse when temperatures are consistently below 40 degrees. Too much exposure to cold damages the tree and eventually kills it.

Allspice is native to areas that have naturally well-moistened earth. Keep the growing medium moist but not waterlogged. Give young trees water daily either with drip irrigation or soaker hoses. A tree in a container will likely need more water than one growing in the earth. Ensure the top two inches of the growing medium is moist before adding more water. If you do not have access to drip irrigation or soaker hoses, a low slow stream from a hose or watering can will do. When it rains, there is no need to water each tree in your garden.

Allspice prefers well-draining average media of almost any type. In its native range the plants grow in many different types of land. If you live somewhere with compacted soil, amend it before you plant your tree with average garden media and agricultural sand. Use the same standard for containers in the garden. The optimal pH to grow allspice is 6.1 to 7.8.

In spring and summer, after 3 years of growth, prune allspice trees either to maintain shape or keep it small if you’re growing indoors. The tree can be pruned from the base up to give it a bushier appearance. Remove any low-lying branches to give the canopy a more conical look. Remove branches that are damaged or cross one another to give allspice the room it needs to grow. Allspice will not lose its leaves in winter, and fruit will drop from the tree naturally. To prevent the sprouting of berries from sprouting, collect them as quickly as possible.

We briefly discussed how to plant allspice berries to produce new plants in an earlier section. You can also grow new plants from cuttings and via air layering. Use pruning shears to remove about 6 inches of the current year’s growth, and remove the bottom 3 sets of leaves, allowing the top two to three to remain. Dip them in rooting powder and place them in starter media in starter pots. In 2 months they’ll produce new growth and can be transplanted.

To air layer allspice, cut partially through a branch with new growth in spring, and wrap it in moist moss. When new roots poke out of the moss, prune below the root and transplant the cutting in your garden.

Once you care for your allspice plants and help them produce fruit, it’s time for harvest. Then you can use the pimento seeds with other spices, like cloves, nutmeg, cinnamon, chili powder, and curry. You can even use the leaves in conjunction with fruit.

Harvest the fruits when they’re large enough, but when they’re unripe and still green – much like juniper. Look for green fruits that are ⅛ of an inch to ¼ inch large. Handpick the unripe fruit (like you would juniper berries) and place them in a basket or bag. Set the unripe berries on a dry surface in the sun to dry. When they are dark red, they’re ready to be stored with your other spices. Separate some of the berries to be used as seeds to sprout new allspice saplings. Rub them against a sieve to release the seeds within. Leaves should be harvested and used immediately. They can be taken from the tree as soon as they are the desired size. Fruit will grow on some plants at 3 years, while others produce berries at 5 to 6 years of age.

Store the dried berries whole in an airtight container for 3 to 4 years. Ground allspice is used to preserve meats or is combined with clove, cinnamon, nutmeg, and other delectable spices. But ground allspice loses potency quickly. Grind them only just before cooking with them. Leaves of pimenta will not store and should be used in cooking in combination with other spices, like clove. Also like clove, store the pimenta berries in a dark, cool area.

Pimenta may sometimes show a sign or two of difficulty. Practicing integrated pest management in combination with careful observation will help keep the maintenance light. That way you can use harvested pimenta in cooking for many years to come.

If you grow allspice in compacted earth, the root system will not have adequate room to absorb nutrients and will drop flowers, preventing access to sun-dried berries and seeds. Transplant a young tree in a rehab container if the earth is too compacted.

When you don’t water your pimenta enough, it can stress the tree and make it more susceptible to pests and disease. This too limits your ability to do some cooking with the dried berries.

If your pimenta is subjected to cold and has resulting black-tipped branches and leaves, this is a sign cold damage has set in. Prune the cold-damaged parts and move the allspice into a climate-controlled area.

Spread fertilizers every 5 weeks at least or allspice will show symptoms of nutrient deficiency.

Although allspice doesn’t have many significant pests, mealybugs, whiteflies, and aphids sometimes feed on the sap of leaves and plant matter. Mealybugs look like tiny cotton balls. Aphids have pear-shaped bodies, and whiteflies are tiny gnat-sized moths. Treat aphids and whiteflies with a strong stream of water from a hose. Ladybugs and lacewings will eat them too. All three of these pests can be treated with neem oil spray. Do not use the spray in the flowering phase, as this deters beneficial pollinators.

Rust is a fungal disease that shows itself the bottom leaves of allspice. The first sign of the disease is white lesions. They take on a green tinge and then blacken leaves, causing defoliation. Prevent rust by providing proper drainage, and spread mulch around the base of your pimenta. There is no treatment for already-infected foliage, so remove any foliage with signs of rust. Spray the remainder of the tree with a copper-based fungicide to prevent further spread.

Powdery mildew is a fungal disease that congregates on the leaves of plants in cool, wet weather. Remove affected leaves as they appear. If the leaves fall, this is a sign the disease has progressed significantly. Prevent powdery mildew with copper fungicide sprays or neem oil.

Bacterial crown gall causes large masses to form at the base of pimenta and on the roots too. A gall at the trunk is the first sign. Progressions of the disease can cause wilting and total death. There is no effective treatment for crown gall, so prevention is key to success. Many species of established tree can live with crown gall for quite some time, but you will need to destroy any infected material from that bacterial disease. Do not compost those materials.

A: They are! Harvest and use them as needed.

Q: Can I eat allspice berries?

A: Yes, but dry and grind them first.