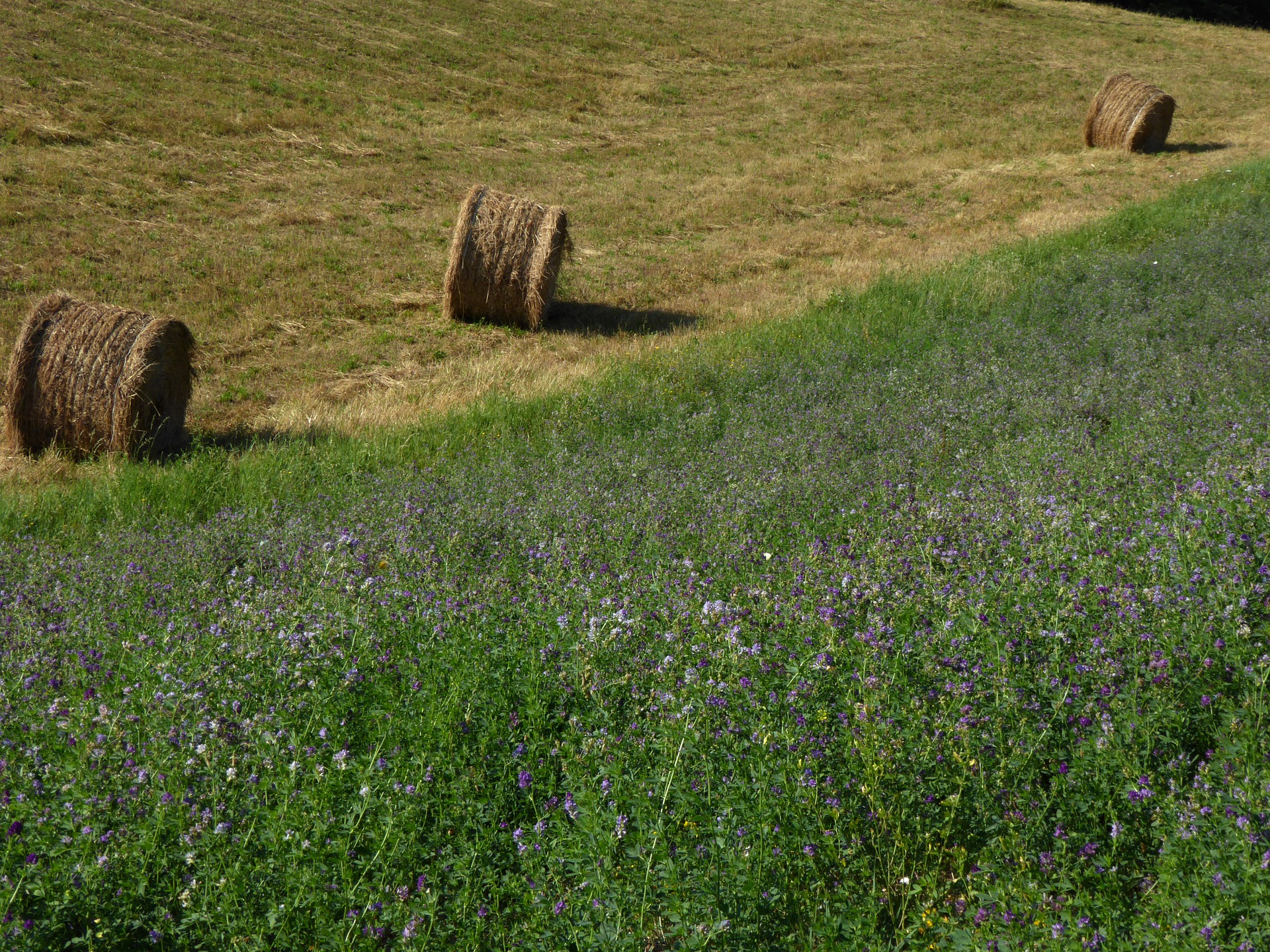 You’ve probably struggled with the soil in at least one of your beds before. You may have tried incorporating fancy garden soil blends or tried to loosen the soil by manually tilling with no results. One way to improve the soil in a garden bed is to introduce an alfalfa cover crop.

Sowing an annual cover crop into a garden has so many benefits. Having the foresight to include this practice in your yearly garden plan gives you excellent preparation for the upcoming growing season, especially since you’ll begin with a substantial and enriched soil structure.

So, what’s alfalfa anyway? And what is this concept of cover cropping? And why would we choose alfalfa as a cover crop instead of others? Feel free to read further to find out! Maybe your next seed purchase for planting will be a winter cover crop.

What Are Cover Crops?

To begin, let’s talk about the agriculture of cover crops. Seed is sown to cover the soil, and the organic material produced will eventually improve the overall soil structure and conditions of the molecular structure of the soil. By adding all of this beneficial organic matter to the soil, you’re also improving the moisture retention capability of the soil. At the same time, you’re providing prevention from heavy weed spread by choosing what should grow in that space. It’s a win-win combination to work into your gardening space!

Some elements of cover cropping derive from companion planting techniques, too. A cover crop can be intercropped between rows of other plants to loosen the soil and prepare it for later planting. This reduces weed spread but also ensures you can work those between-row areas later if desired.

This process supports the stability of future yields while feeding the land in a synergy that can’t be attained anywhere else. Today, cover crop seeds are broadcast in an area that needs improving or protection from erosion or weed development.

There are 4 different types of cover to consider. Each has its proper use and function. Consider these before you get to planting.

Firstly, there are grasses, which are great to plant when you want to scavenge leftover nutrition from a previous crop. We’re talking wheat, ryegrass, and barley. When you chop them to the ground and till them in, the high carbon content in the plant lingers while the nitrogen releases into the soil. With all cover crops, there will be a period of breakdown required before the nutrients are plant-available.

There are legumes planted to fix nitrogen in the soil, which may be a better choice if you want a garden that guarantees strong root growth. Legumes like clover and vetch break down faster than grasses and help with erosion control.  Often, people will plant legumes with grasses to offer a dual purpose to their cover cropping practice.

Brassicas are a great cover crop that you can eat. They produce a lot of good biomass which helps prevent garden soil in fall. They also contain molecular compounds that are great for pest control. But they are often planted among other cover crops because although they are beneficial they aren’t as powerful as others.

If you grow a root veggie brassica like radishes, they’ll also loosen the soil.

Non-legume broadleaf plants are similar to brassicas in that they have rapid growth in the fall and provide good biomass to your garden soil. Spinach is a great choice for fall because it will survive winter, too. They may scavenge nutrients from the last season’s crop.

So, what exactly does a cover crop do to benefit new plants that will exist there in the future?

Here’s a list of the benefits a cover crop can bring to a garden or farm.

Alfalfa (Medicago sativa) is a perennial in the pea family. Also known as lucerne, it is used as a forage crop all over the world. People grow an alfalfa crop to feed farm animals or to use as green manure. It’s a popular animal feed, plus when dried and ground is a nitrogen-dense fertilizer. It can even be chopped and dropped on the surface and treated like a straw mulch.

It has a long history from Iran, its country of origin, all the way to your sandwich. You may already know alfalfa sprouts are widely used today in food.

Planting alfalfa is simple and easy, too. Even better, this perennial is a good source of food for humans and animals alike. Alfalfa sprouts contain high amounts of protein. If farmers decide to allow an alfalfa sprout to grow into seedlings, they can use them to feed their livestock with the resulting hay, rather than purchase wheat straw or alfalfa haybales from a feed store.

Pros Of An Alfalfa Cover Crop

An alfalfa crop provides a combination of what all types of covers do. Alfalfa plants have long lateral roots that penetrate and loosen the soil.

Put alfalfa in garden soil where you want to fix nitrogen, and have some green manure to keep that cycle going.

Pollinators also appreciate when gardeners grow alfalfa because as alfalfa flowers, leafcutter bees will head into the open-pollinated area for nectar. Other bees love alfalfa too, as do a variety of other pollinating insects.

Cons Of An Alfalfa Cover Crop

There are just a couple of things to consider with alfalfa. Let’s talk about two important points.

The first thing to consider with alfalfa is timing. In locations that get very cold in the winter, avoid planting in the late autumn months. You’ll need to start your seed earlier to ensure germination and enough development of established plants for the area to be covered.

Planting alfalfa seed early is best for those in colder regions. Planting in late fall is best for those in warmer regions, so seedlings can be established and survive (or at least cover) the soil through winter. While it’s fine if the plants die off over the winter months as that just hastens their decomposition, you still want enough cover present to prevent weed spread before they do.

The other issue that arises with crops like wheat, alfalfa, and other perennial crops used for soil building is if they aren’t harvested at the right time they’ll go to seed. If they aren’t cut at the right harvest time, the seeds then go through the process of spreading and germination and seedlings grow long lateral roots into the soil. This can exhaust the soil prematurely too.

To prevent that germination, make sure to cut alfalfa down and either harvest it or use it for mulch before it goes to seed. We’ll get into the particulars of harvesting in the next section.

How to Plant an Alfalfa Cover Crop

Let’s discuss a few growing tips for planting alfalfa. Whether you’re trying to loosen soil, start growing for forage, or to feed livestock, this should contain the basics alfalfa growers need to know.

Alfalfa likes full sun, and soil that doesn’t hold too much moisture. Since the roots are acclimated to drought-prone areas, you won’t need to provide organic matter like mulch to seeds to trap in moisture.

Planting alfalfa in an area that doesn’t drain well or gets waterlogged will produce rot. Choose neutral soil, too.

When to Plant Seed

Plant alfalfa seed according to your region. Ensure there is enough cool weather to keep alfalfa happy, but warm enough to allow it to get established.

In zones where the winter is long and cold, begin planting alfalfa seed in spring. This allows seedlings to establish in the temperate spring and summer months. Harvest in fall.

If you’re in a mild region, plant seed in fall, and allow it to establish through the mild winter, then harvest in spring.

Ways to Orient Your Crop

There are different ways to plant this perennial legume in your garden. You can simply broadcast seed in a large area in spring or fall.

This could be in a raised bed, a row, or a large area you’d like to prepare for gardening, forage, or agriculture.

You can also intercrop seed in spring or fall by casting rows of alfalfa between other crops. This is a great way to ensure you have forage and food, and may also be a good way to trap pests as a trap crop.

Doing intercropping in rows is a great way to improve alternate rows of soil for the next season. Remember to keep seed rows at least 18 to 24 inches apart.

How to Plant Seed

If you’re doing large-scale farming or agriculture, you’ll need a lot of seed. The general rule for a perennial like alfalfa is about 12 to 15 pounds of seed per acre. This is the optimal yield.

Most home gardens sit on a plot of about one-quarter of an acre. So adjust your seed rate to the area where you’re growing. Sometimes home gardens are just a small portion of that quarter acre. So you may only need a couple of pounds of seed.

To plant seed, broadcast enough for the planting area. No need to tamp or cover with organic matter. The seeds will germinate on the ground within two weeks. If you have lots of birds or wildlife that will consume your broadcast seed before it sprouts, you can spread a thin layer of soil over the surface, or rake the seed in loosely, but it’s not essential.

Once the seed germinates, all you have to do is let it take off and wait for the right time.

If you’re feeding animals, allow the perennial to get right to the point where it is about to flower. This is when nutrition is highest. Then cut it down, and cure it. Once it’s cured, it’s suitable as feed.

If you’re using the perennial to fertilize your soil, let it flower, and before it goes to seed, till it down and into the soil. Then let that goodness release into the soil for your next crop.

For people doing raised bed covers, it is often easiest to use a chop-and-drop methodology. Wait until the alfalfa begins to flower, then cut it back and leave the cut material right there in the bed. Tilling is not an absolute necessity in this process! By spring planting time, you’ll have nutrient-rich soil ready to go.

Q: Is alfalfa a nitrogen fixer?

A: Indeed! That’s one of the things it’s mostly used for.

Q: What is the fastest-growing cover crop?

A: Buckwheat grows fastest of all, at about 4 weeks from seed to flower.

Q: What is the best cover crop for nitrogen?

A: Any legume will feed nitrogen to soil and fix it very well. Alfalfa is certainly one of the most popular!