A drought-tolerant redesign for Driftwood Garden 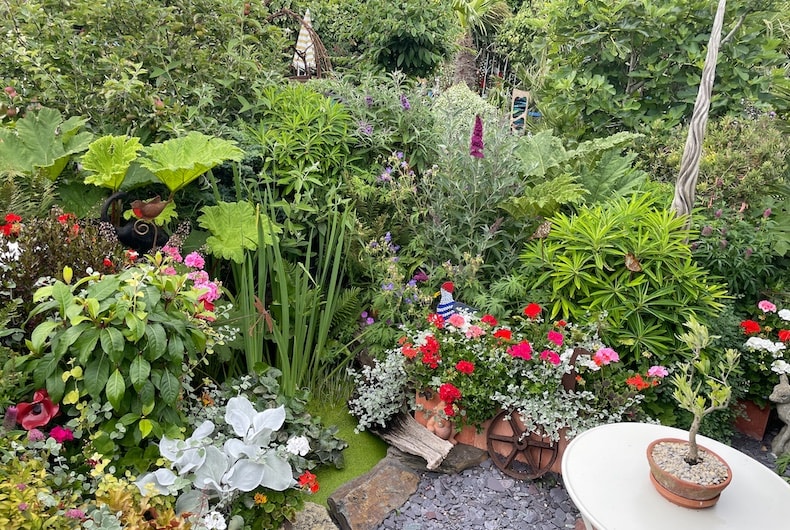 A drought-tolerant redesign for Driftwood Garden

Driftwood garden in Seaford has been visited by 23,000 visitors, to date
Image: driftwoodbysea

Geoff Stonebanks, designer of the award-winning Driftwood Garden in East Sussex, has been busy transforming another corner of his inspiring outdoor space. He talks us through his brand new water feature area, designed around drought-resistant plants that will reduce the amount of time and natural resources required to keep it looking great. The before and after photos are incredible!

I’ve always loved my garden, especially filling it full of pots through the summer months, painting the landscape with pretty flowers. Back in the autumn of 2021 (bearing in mind I’m fast approaching 70) I decided I had to change the garden in order to make it much easier to look after, but equally, to continue to be of interest to the hundreds of visitors who come and see it each year. With that as my brief, I set about creating a sunken Mediterranean garden with old railway sleepers, which has been a real hit with the 700 visitors who came last summer.

This year, I decided I’d tackle the corner of the plot I have not really made an impact on since moving here in 2004, other than covering the area with many containers around the small pond. You can see that there was just a mass of greenery and colour this summer, but, as you can imagine, 2022 in particular with the drought and hosepipe ban, it was extremely difficult keeping it looking its best for visitors.

The space was cleared and the old pond filled in
Image: driftwoodbysea

I sketched out the design I wanted to create and the same landscaper who translated my last project from drawing to reality, was, thankfully, up for more of the same. So, once the garden had closed its gate for the 2022 season, I began to strip the area, ready for him and his team to work their magic.

Day 1 of their labours began clearing some of the debris I’d not been able to remove, but in essence, all the plants and objects I’d wanted to retain had been carefully located elsewhere, until the work was complete. The old bench had to go, as it was rusting away and the 5 trickle ponds were removed.

I decided to go for the wow-factor with objects, as there were not going to be as many plants in the finished project. My first purchase was an amazing curved corten steel wall, delivered from The Netherlands, closely followed by a beautiful, circular, corten steel raised pond to replace the one I had filled in.

I was amazed how quickly the guys created the structure for the area but, sadly, work had to be spread out longer than we wanted, because of the heavy rains on several days across the build.

The same paving slabs that were used elsewhere in the garden create a strong visual link
Image: driftwoodbysea

By day 4, the corten steel wall had been installed and the adjoining brick walls built and it really started to take shape. For continuity, I had decided upon another small Indian sandstone circle to match the other two in the garden. We were all quite surprised how big the area looked once stripped of all the old planting and many containers.

The old fountain is fitted in the new water feature
Image: driftwoodbysea

By day 7, the final day of the build, the area had been completely transformed, including a small set of new steps to link the area with the centre of the garden. The garden has always had one way up and one way down so movement of visitors will now be much easier. The fountain that used to reside in the pond now looks resplendent in the new feature.

The garden is illuminated at night
Image: driftwoodbysea

I purchased some Nurseryman’s Alstroemeria Choice Mix 6 Jumbo Plugs back in October from Thompson & Morgan that will be planted up in the area behind the dwarf walls in the spring. Likewise, a Mangave Lavender Lady, purchased from T&M last June, will adorn the area through the summer months.

Before the big freeze came, I completed some of the planting in the area, but the bulk will be done next spring. A lovely new light has been installed now too, casting a wonderful ambience across the patio at night.

Another new addition is a small steel gabion, that is housing all the surplus stones and slate that had been dotted around the garden. I’m undecided, as yet, whether to purchase a cushion and use it as a seat, or simply display succulents on it next year! Time will tell. The stunning Yucca Thompsoniana next to it is another new purchase for the area. I’ve yet to purchase a new bench to sit alongside the shed, but that can wait until the New Year.

All in all, I am extremely pleased with the finished product and once all my succulents are transferred from their winter homes, next May, the area will look quite magical. More importantly, it will be much easier to maintain, especially if we have a repeat of this summer’s drought.

Geoff Stonebanks was very lucky to be able to retire early from 30 years in Royal Mail back in 2004. He had 3 different careers with them first as a caterer, then manager of a financial analysis team and finally as an Employee Relations Manager and Personnel Manager. He sold up and moved with his partner to Bishopstone, near Seaford in East Sussex in 2004 and now spends all his time gardening and fundraising for Macmillan Cancer Support. Using his multi award-winning garden, featured on Gardeners’ World on BBC TV and finalist in Gardeners’ World Magazine Garden of the Year 2016, he’s raised £164,500 for various charities in 12 years, £109,000 of that for Macmillan. In his spare time, he is also Publicity Officer for the National Garden Scheme in East & Mid Sussex.