8 important things to consider when renovating a larger garden 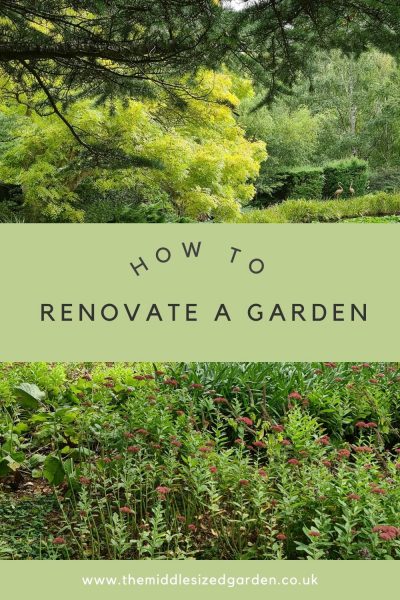 8 important things to consider when renovating a larger garden

People often ask me what to do with a larger garden, especially if they’ve recently moved in and inherited someone else’s garden.

And although this is the Middlesized Garden blog, many garden principles are equally appropriate for any size of garden.

So I leapt at the opportunity to accompany Stephen Ryan of the The Horti-Culturalists YouTube channel to Tieve Tara, a garden at the beginning of a renovation.

As well as being a broadcaster and presenter, Stephen also grows plants professionally at his Dicksonia Rare Plants nursery. And he has known the Tieve Tara gardens all his life, seeing it under several owners. 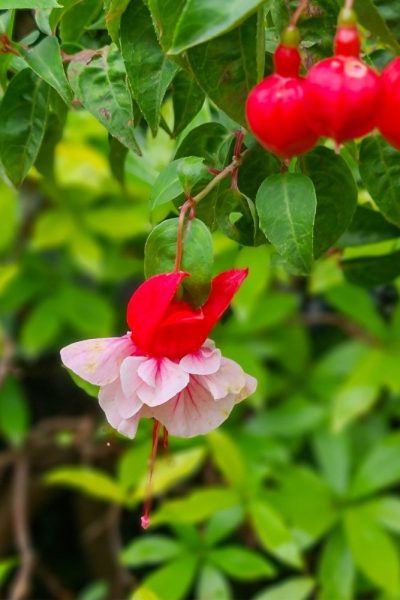 Wait a year to see what plants you have in your garden, says Stephen. A fuschia expert planted the fuschias at Tieve Tara, so there are some exceptional ones. However, the labels are lost.

Stephen’s points also helped me understand why a larger garden can have lots of beautiful elements, but can sometimes fall flat when you visit it.

Start with the architecture, the history or the context

If you’re renovating a garden of any size, whether small, large or, indeed, middle-sized, then the obvious place to start is the history and context of the plot and the architecture of the house.

In Tieve Tara’s case, the history, architecture and context are quite confusing. That’s not unusual in today’s homes and gardens.

It’s essentially a Victorian garden, but the house has been completely replaced twice since the gardens were originally created. It’s in the mountains around Melbourne, Victoria, which were denuded of their native woodlands in Victorian times when the gold rush created a massive demand for houses.

Those who acquired the land immediately afterwards were obliged by the Government to replant trees. Many of the trees they replanted were European trees. The indigenous woodland also replenished itself. So the current environment is a mix of European and Australian trees.

But you need an overall vision for a larger garden

The current house is modern. It was built in the 1980s, probably after a devastating bush fire that destroyed many homes in the area.

The new owners could, therefore, take a number of style directions in the garden. It could be Victorian or contemporary. It could showcase native plants or celebrate the broad biodiversity of a typical Victorian garden.

Or as a larger garden, it will be divided up into a number of rooms. So it could, perhaps, do it all.

But Stephen points out that, in a larger garden, you still need an overall vision to pull the garden together.

You can have lots of different elements…

If you think about some of most successful large gardens, there is both variety and cohesion.

That hasn’t quite worked at Tieve Tara. ‘When one of the previous owners started to invest in the garden, they called in a number of different experts,’ Stephen says. ‘The rose garden was created by one expert and the herbaceous borders by another.’ Then there was a fuschia border, a Japanese garden and a Monet bridge.

‘But there wasn’t one overall vision drawing it all together,’ he explained. So the various parts of the garden feel somewhat disconnected with each other. 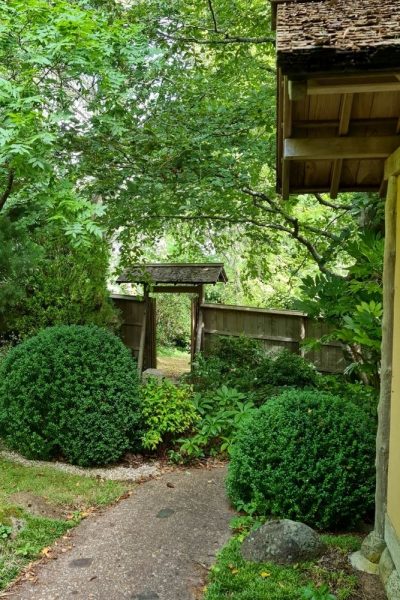 The Japanese Garden at Tieve Tara. A large garden is often divided into garden ‘rooms’ with different themes. But you need an overall vision to make it work as a whole.

Although many bigger gardens may also have more resources, time can add up. There is a rose garden at Tieve Tara, for example.

But roses don’t grow well in this area. There are too many pests and diseases. The soil and climate aren’t quite right.

So getting a good rose display here means spending a lot of time fertilising, pruning, dead-heading and spraying for pests.

In a small garden, you might have just a couple of rose bushes.

But if you have two long rose borders, then you could spend a lot of time and budget trying to make them work.

If you choose plants that grow well in the area, you could have a spectacular display for half the time, money and effort.

Stephen says that structures like arches and pergolas should often be purpose made for the garden.

A standard prefabricated arch won’t have the right proportion for a larger garden.

Fortunately, the arches at Tieve Tara are wide and tall, framing the paths beautifully. They are almost completely conceal with climbers, such as clematis and Virginia Creeper. 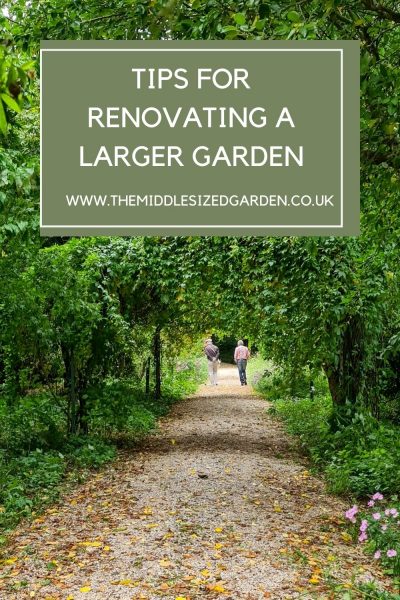 Paths, arches and structures need to be bigger in larger gardens. And paths should have a sense of purpose.

Paths need a destination and a sense of purpose

This tip is equally relevant for any size of garden. Stephen believes a path or a bridge should have a function, not be purely ornamental.

For example, there is a ‘Monet bridge’ at Tieve Tara. It cuts across the middle of a peanut shaped large pond or small lake.

However, Stephen says that it’s easy to see that you could walk round the lake. The bridge therefore serves no purpose.

‘In Monet’s garden, the bridge is at the end of the lake, spanning a stream. If you wanted to cross, you have to use the bridge or wear waders to get over the stream,’ he says.

He would suggest extending the planting so it appears that the only way to cross the water is to go across the bridge.

The same goes for paths.

Once again, this is a common tip when designing smaller gardens. But just because a garden is large, that’s no reason to define boundaries so that people know exactly where the garden ends.

If you have trees or pockets of woodland near your boundaries, then they will visually merge with trees beyond. Your garden could seem even larger.

Tieve Tara is bordered by woodland. You might think it was in the countryside. In fact, there are homes on either side. You’re just not aware of them.

Trees and woodland blur the boundaries at Tara Tieve. You wouldn’t know that there are neighbouring properties.

Go wilder and more natural away from the house

This is a good way of managing the time and effort required for a larger garden. And it also makes a lot of sense visually.

The most formal gardens and borders work well close to a house. And as you get further away, the implication is that you are heading into wilder, woodland.

In fact, as with Tieve Tara, you may have neighbours rather than woodland. But the more natural planting and the wildlife it attracts make you feel as if you were in the country.

At Tieve Tara, the woodland is a mix of native species and the European trees imported in Victorian times. There is minimal management of these spaces. Trees are pruned if they need it and paths are kept clear. But it’s not the time-intensive gardening needed for a formal border.

Perennial borders don’t last forever. The original herbaceous borders at Tieve Tara were planted by an expert. They were complex and colourful. And they were on a slope, reflecting into the pond below.

However, over the years, the ‘thugs’ have taken over. Dominant plants have crowded out less vigorous ones.

Although Stephen cautions you to wait a year to find out what is in your perennial borders, he says that older herbaceous borders will probably need replacing, with lots of manure and mulch. ‘You can do this section by section or take all the plants out at once.’ 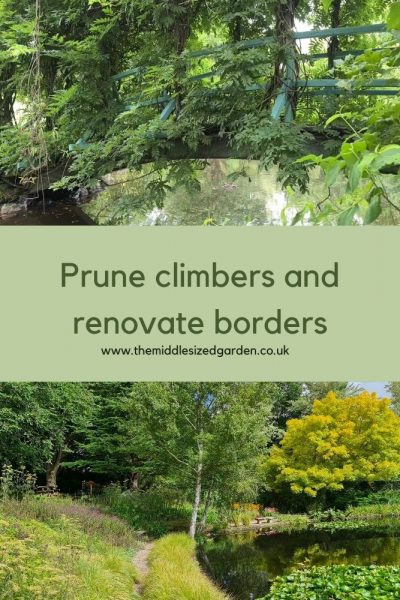 Perennial borders need to be renewed every so often, with manure and mulch added. Thugs need to be lifted and divided and you may have to add new plants to keep the balance right.

See more of Tieve Tara in the video

It was a difficult garden to photograph, because the factors that make a good photograph are also the ones that make a good garden. Tieve Tara has new owners and a new head gardener, but they have barely started their renovation. So it is currently overgrown and lacking in direction.  But you can see more of  it in the video.

I’m often asked for recommendations, so I’ve put together the books, products and tools I consider good on the Middlesized Garden Amazon store. For example, here is a list of some of my favourite gardening books. They’re well worth reading before renovating your garden, whether it’s small or large!

And do join us for a free weekly email with tips, ideas and inspiration for your garden.